What Would Santa Do?

On November 12, the Associated Press revealed that ads demanding "Why believe in a god? Just be good for goodness' sake?" will begin appearing on Washington, D.C. area Metro buses starting next week and running through December (naturally). The ads feature a strange Santa-garbed person with Rastafarian braids. They also include the admonition from the familiar Christmas song "Here Comes Santa Claus" to be "good for goodness' sake," rather than because any sort of Divine being provides the impetus and the power to be good. 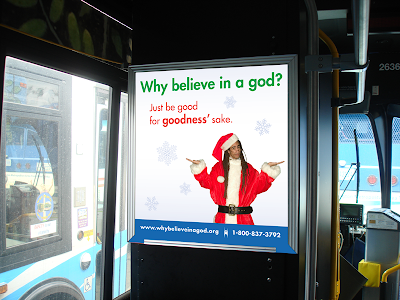 The American Humanist Association, AHA for the sake of expediency, is responsible for the ad campaign. AHA purports to have two reasons for the seasonal siege.

First, "there are an awful lot of agnostics, atheists, and other types of non-theists who feel a little alone during the holidays because of its association with traditional religion," according to AHA spokesman Fred Edwards.

The "holidays," that vague, innocuous, politically correct and cojones-less term, has no association with traditional religion, Fred. The "holidays" are the perfect purview of that "awful lot" of agnostics, atheists, and other associated non-theists. In fact, they should be quite exhilarated in their celebration of the holidays, since it represents a stage in the victory over religious expression in the public square.

It is Christmas, the holiday that dares not speak its name (since it includes the name of the Christian Lord that seems to be so inexplicably offensive to some), that may alienate AHA and those for whom it is an advocate. But somehow, thousands upon thousands of ordinary citizens who are not Christians, and may or may not have their own exclusive holidays to celebrate, manage to slog through the Christmas season with their feelings unscathed.

AHA's second reason to deck the Metro buses with posters of apostasy is to declare that "humanists have always understood that you don't need a god to be good."

According to Roy Speckhardt, executive director of AHA, "Morality doesn't come from religion. It's a set of values embraced by individuals and society based on empathy, fairness, and experience."

Have to agree with you there, Roy. Morality definitely does not come from religion. In fact, sometimes immorality comes from religion. It all depends upon the object of worship. The Swiss philosopher/poet Henri Frederic Amiel confirmed this when he said, "The test of every religious, political, or educational system is the man which it forms. If a system injures the intelligence it is bad. If it injures the character it is vicious. If it injures the conscience it is criminal."

Oh yes, conscience! Mr. Speckhardt says that morality is a set of values based on empathy, fairness, and experience. But he doesn't explain from where the empathy and fairness originate. What is the source of that sense of fairness, the sense of right and wrong? Does it spring from nowhere like Athena from the head of Zeus? Perhaps some theist associated with traditional religion will provide Mr. Speckhardt with a copy of C.S. Lewis's Mere Christianity. It begins with a brilliant exposition on "Right and Wrong as a Clue to the Meaning of the Universe."

So what would Santa think of AHA's attempt to identify him with their Advent attack? Even the Santa portrayed in the lyrics of Gene Autry, who is not exactly remembered for his theological prowess, is said to "know that we are all God's children." 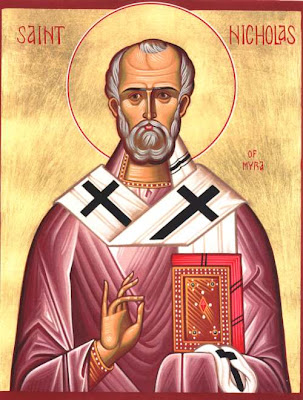 But would the real Santa Claus have a stronger reaction to AHA? (Yes, Fred and Roy, there is a Santa Claus.) St. Nicholas was the Bishop of Myra, in 4th century Asia Minor, now Turkey. In addition to being remembered for his generosity and compassion to the poor and to children, Bishop Nicholas was the kind of "muscular Christian" that makes the folks at the National Council of Churches shudder. He was a staunch defender of Christian orthodoxy and would not be too pleased with the "Why believe in a god?" mentality.

During his tenure at bishop, he attended the first ecumenical council of the Church, which had been called to deal with the growing heresy of Arianism. Arianism, named after Arius, a North African priest who was its key proponent, denied the full deity of Jesus Christ and said that he was a created being. Nicholas struck a blow for orthodoxy, slapping Arius in the face after he spoke.

Nicholas might well deal with the American Humanist Association in the same manner in which he dispatched poor Arius, but probably, being older and wiser, and "good, for goodness sake," he would refrain from physical violence and just urge those who believe in God to assert their right to believe, and to flaunt their belief as publicly as AHA flaunts its unbelief.


Faith J. H. McDonnell is director of the Religious Liberty Program at the Institute on Religion and Democracy in Washington, D.C.
Posted by jtf at 10:43 AM

I can't believe that we are worried about leaving atheists out of Christmas. The exclude themselves from the holiday..