For decades, before a heedless congregation, some of us have preached the old Hamiltonian gospel.

Great nations do not have trade partners. They have trade competitors and rivals. Trade surpluses are superior to trade deficits. Tariffs on foreign goods are preferable to taxes on U.S. producers. Manufacturing, not finance, is the muscle of the nation. 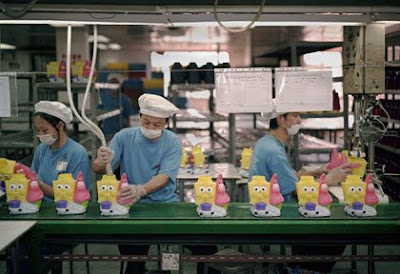 Following Hamiltonian precepts, the United States grew from 13 rural and agricultural colonies into the greatest industrial power in all history, producing 42 percent of the world's manufactured goods. We were the awe and envy of mankind, the self-sufficient republic, maker of half of the armaments produced by all the nations in World War II.

That is the America we grew up in—that has now vanished.

Chrysler, Ford, perhaps GM, may be dying. Manufacturing has sunk to 10 percent of U.S. employment, a level unseen since before the Civil War. Europeans and Asians are to assemble in Washington this week to impose upon the United States a New World Economic Order like the one we imposed on them at Bretton Woods in 1944.

Such are the fruits of free-trade ideology.

Across the Pacific, a nation that studied how America rose, and watched as America declined, chose a different path. China adopted and pursued a China First policy of economic nationalism.
In July, Charles McMillion of MBG Services testified to the U.S-China Economic and Security Review Commission on China's progress. [PDF]

Beijing began its astonishing rise by devaluing its currency 45 percent in 1994, slashing the prices of exports in half and making imports twice as expensive. As America threw open her market and invited China to come in and capture it, China had erected a Great Wall around her own.

Results: China's worldwide trade surplus in manufactures, $31 billion in 2001, hit $401 billion in 2007, a 1,300 percent increase, and may reach $500 billion in 2008. China has shoved Germany aside to become the world's greatest exporter and now leads the world in the export of manufactured goods to Japan and the European Union, as well as the United States.

While running trade deficits with Asian neighbors like Taiwan, to tie them politically to Beijing, China is running record trade surpluses with the European Union and the United States, making America and the West as dependent upon China for our manufactures as we are on OPEC for our oil.

Chinese auto production has quintupled since 2001. She now produces more cars than Germany and may exceed the United States in 2009. While Chinese auto exports are still heavily in parts, finished cars are coming soon to a dealer near you. The Chinese will likely run the sword through the last standing member of America's Big Three.

China still imports commercial airliners. But she now has a large and growing trade surplus in airplane parts. This follows the pattern in textiles, computers and autos. First, the Chinese learn by assembling parts in factories in China. Then, China begins to produce the parts. Then, China produces the finished products and goes out to capture the world market, while protecting her own by keeping her currency cheap.

On items the Commerce Department categorizes as advanced technology products, America began running a trade deficit for the first time early in the George W. Bush years. China now exports to us four times as much, in dollar value, in ATP items as we sell to Beijing.

As America mothballs the shuttle, relying on Russian rockets to get our astronauts back up to a space station we built, China is putting men into space and heading for the moon.

Since America ushered China into the World Trade Organization in 2002, Beijing's growth rate has been four times that of the United States, accelerating from an average 10 percent of gross domestic product to 12 percent in 2007.

As America plunges into recession and our industry hollows out, while China is still growing at 9 percent, as the 20th century's greatest creditor nation now borrows from Beijing to pay for booster shots for its sick economy, may we hear once again the Bush-Clinton refrain about how the terrible danger we all face is from "protectionism."

- Patrick J. Buchanan needs no introduction to VDARE.COM readers; his book State of Emergency: The Third World Invasion and Conquest of America, can be ordered from Amazon.com. His latest book is Churchill, Hitler, and "The Unnecessary War": How Britain Lost Its Empire and the West Lost the World, reviewed here by Paul Craig Roberts.
Posted by jtf at 2:10 PM