Whose Speech is Hate Speech?

“You must destroy the West” -- so said a speaker at a recent conference in London. The conference featured Islamic leaders openly calling for the overthrow of the British government and the establishment of an Islamic state in Britain -- under the noses of British authorities who, just days before the conference, had announced a new crackdown against “hate speech” and “extremist” preaching. The episode was instructive -- or should have been -- for proponents of the Fairness Doctrine and “hate speech” laws in the United States. 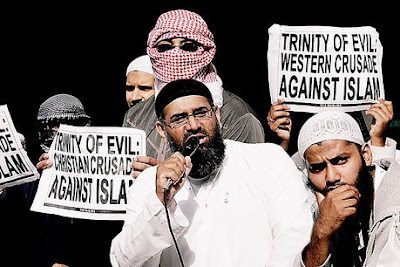 The conference organizer, Anjem Choudary, declared at the conference that “as Muslims, we will not submit to any man-made law, any government, or any prime minister -- Bush or Brown -- or Jacqui Smith. We submit to Allah.” Instead of submitting, he called upon Muslims to rise up: “It is our religious obligation to prepare ourselves both physically and mentally and rise up against Muslim oppression and take what is rightfully ours. Jihad is a duty and a struggle and an obligation that lies upon the shoulders of us all. We will not rest until the flag of Allah and the flag of Islam is raised above 10 Downing Street.”

Choudary called on Muslims to dare to take the risks involved in participating in the violent overthrow of the British state. “There are three types of Muslims,” he said: “those in prison, those of us that are on our way [to prison] and non-practicing Muslims. Brothers and sisters, if you do not fear your home being raided by the Kufar [non-believer] police, you are not enforcing the Sharia [Islamic law].”

Speaking via a live feed from Lebanon, Sheikh Omar Bakri Muhammad, a jihadist leader formerly based in Britain but now barred from returning to that country, exhorted the conference attendees: “Do not obey the British law….We must fight and die for Islam -- this is the map and road to Jennah [Paradise].” He praised Osama bin Laden and asserted that Muslims had no obligation to obey secular laws rather than Islamic law.

Ironically, this conference came only two weeks after UK Home Secretary Jacqui Smith announced that the British government was taking new steps to stop “preachers of hate from spreading extremism in our communities.” So would Choudary and the other conference organizers and speakers be arrested? Unlikely: a British Home Office official said that “the new measures…only prevent individuals from coming here and spreading their hate in person.” As such, they “do not cover” this jihadist conference.

Later, the Home Office and London’s Metropolitan Police played hot potato with the conference. A Home Office statement said that it wasn’t their responsibility to determine whether or not any laws had been broken; rather, “it is for the police and the Crown Prosecution Service to investigate any breach of the law,” to which a Police spokesman replied: “It’s the Home Office that makes the laws. If it doesn’t know whether something is against the law, then who does?”

Good question -- and one that goes to the heart of the problem with “hate speech laws” in general. Even in the face of the London jihadist conference’s open calls to destroy British society as it is currently constituted and impose Islamic law there, no one is quite sure what constitutes “hate speech” and why hate speech laws are so dangerous. “Hate speech,” like the “fairness” that the Fairness Doctrine promises to establish, is in the eye of the beholder. Hate speech laws, like the Fairness Doctrine, are so vague in their application that law enforcement officials can easily become genuinely befuddled (like the UK’s Home Office) as to what crosses the line and what doesn’t -- and that very vagueness can make them a tool in the hands of those in power to silence dissent.

As America welcomes a new President who counts among his supporters many who would like to see the U.S. enact laws like Britain’s hate speech codes and the Fairness Doctrine, this London jihadist conference illustrates anew that such laws create more problems than they solve. As jihadists in Britain speak openly about their intention to overthrow the British government, British officials would be better off dusting off and enforcing old laws about sedition rather than trying to figure out if some dangerously vague new laws have been broken.

- Mr. Spencer is director of Jihad Watch and author of "The Politically Incorrect Guide to Islam (and the Crusades)", "The Truth About Muhammad" and the recently released "Stealth Jihad" (all from Regnery -- a HUMAN EVENTS sister company).
Posted by jtf at 11:14 AM