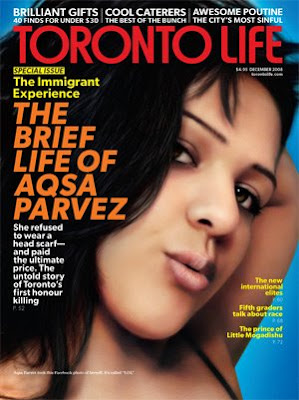 She told her friends that her father was going to kill her. She ran away, stayed at a shelter, stayed with friends. She was lured back home by honeyed sentences. Her family could not sleep without her. Late last year, on December 10th, in Toronto, sixteen year-old Aqsa Parvez's father. Mohammed, and her brother, Waqas, collaborated in her murder.

She refused to wear hijab, she was becoming too assimilated.

Mohammed and Waqas Parvez are currently in jail awaiting trial.

This seems to be an open-and-shut case of an honor killing. Islamists in Canada disagree and have launched a protest against a popular Canadian magazine, Toronto Life, for daring to describe Aqsa's murder as an honor killing. An announcement, ostensibly penned by Michelle@urbanalliance.ca went out over Facebook calling for people to barrage the magazine's editor, Sarah Fulford, with email and telephone criticism and to attend a Speak Out and press conference which was to have taken place last night. And to write to a new pro-Muslim magazine titled Aqsa-Zine.

Ironically, the new zine is open to Muslim women only. No Christians, Jews, or Hindus need apply.

This is the problem: Islamist separatism -- aka Islamic religious and gender apartheid. It is practiced in Muslim countries and transported by immigrations globally. Tradition and religion have a storng hold, especially on immigrants in a strange, new land. However, many religious and cultural groups have managed to both integrate and to retain their own religious identities. Muslim immigrants (and their third generation descendants) seem to have a much harder time with this balancing act.

If we understand Islam as an all-encompassing political, military, religious, social, and cultural entity (which it is), then things become clearer.

Known honor killings first arrived in North America in 1989, when Palestina Isa's father, an Abu Nidal Palestinian terrorist and his wife, her mother, both slaughtered their hard-working and much-abused 16 year old daughter Palestina. Her crime? She was becoming too "American," too independent, too academically ambitious--and she had a friend, a boy, who was an African-American. Her mother held her down and her father butchered her with tremendous animal ferocity.

On January 1st of this year, Yasser Said shot his daughters Sarah and Amina to death in Dallas and probably escaped back to Egypt. Like Palestina, they were teenagers (aged 17 and 18). Their mother collaborated in their murder by luring them back home to their deaths. The FBI has been hunting for Said and recently featured him on their Ten Most Wanted List. They described Said as having committed an "honor killing."

For reasons that remain unclear, within a week, the FBI removed that description. Some say that the Bureau caved into Islamist pressure. Others, myself included, suggest that it would not necessarily help them capture Said if he were seen as a "Muslim hero," who was being persecuted because he is a Muslim.

After Parvez was honor killed, Mohammed Elmasry, of the Canadian Islamic Congress, was quoted as saying: "I don't want the public to think that this is an Islamic issue or an immigrant issue. It is a teenager issue."

Islamists insist that honor killings have nothing to do with Islam. They say that it is a "cultural" but not an "Islamic" crime. They are wrong. Islamists also say that honor murders are the same as domestic violence. All men, all religions engage in it. Wrong. Most honor killings are committed by Muslims who believe that what they are doing is a sacred, religious act. They may misunderstand the Qu'ran but as yet, no mullah or imam has stood up in the global, public square to condemn such murders as dishonorable and anti-Islamic. No fatwa has ever been issued against a Muslim honor killer.

It is unfortunate, even shameful, but not surprising that Islamists seek to cover up this sin against Muslim girls and women by attacking those who would dare expose it as "Islamophobes."
We cannot afford to fall for this deception. A crime is a crime. The shame resides in the criminal, not in his victim. The shame will become ours if we justify the brutal sacrifice of Muslim girls and women in order to remain multi-culturally and politically correct.

- Dr. Phyllis Chesler is the well known author of classic works, including the bestseller Women and Madness (1972) and The New Anti-Semitism (2003). She has just published The Death of Feminism: What’s Next in the Struggle for Women’s Freedom (Palgrave Macmillan), as well as an updated and revised edition of Women and Madness. She is an Emerita Professor of psychology and women's studies, the co-founder of the Association for Women in Psychology (1969) and the National Women's Health Network (1976). Her website is http://www.phyllis-chesler.com/.
Posted by jtf at 9:02 AM