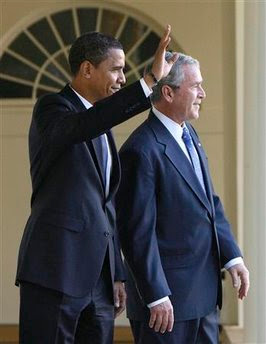 For liberals, this is a settled question. Bush is not merely a conservative, he is the conservative. He is the ur-right-winger, the Platonic ideal of all that is truly Republican.

For some liberals, this is clearly just a tactical pose. Bush is unpopular, so they hope to discredit conservatism by marrying it to Bush, just as Barack Obama succeeded by painting John McCain as a Bush clone. This is the moment, as Obama might say, to permanently block the right-hand fork in the road so the country can only move leftward.

The view on the Right is very different, and the debate about the Bush years will largely determine the future of the Republican party and the conservative movement.

Bush’s brand of conservatism was always a controversial innovation on the Right. Recall that in 2000 he promised to be a “different kind of Republican,” and he kept his word. His partner in passing the No Child Left Behind Act was liberal Massachusetts Sen. Ted Kennedy. Bush’s prescription drug benefit — the largest expansion of entitlements since the Great Society — was hugely controversial on the right. He signed the McCain-Feingold bill to the dismay of many Republicans who’d spent years denouncing campaign-finance “reform” as an assault on freedom of speech. The fight over his immigration plan nearly tore the conservative movement apart.

This is not to suggest that Bush was in fact a liberal president. Politics is not binary like that. There were conservative triumphs — and failures — to the Bush presidency. He appointed two solid conservatives to the Supreme Court. He tried to privatize Social Security, though that failed for sundry reasons.

His much-touted “compassionate conservatism” was rejected by many on the right as a slap to traditional conservatives and an intellectual betrayal of Reaganite principles. It was a rhetorical capitulation to Bill Clinton’s feel-your-pain political posturing and an embrace of the assumptions that have been the undergirding of liberalism since the New Deal. That is, the measure of one’s compassion is directly proportionate to one’s support for large and costly government programs.

And Bush admitted as much. In an interview with The Weekly Standard’s Fred Barnes, Bush explained that he rejected William F. Buckley’s brand of anti-government conservatism. Conservatives had to “lead” and to be “activist,” he said. In 2003, Bush proclaimed that when “somebody hurts” government has to “move.” This wasn’t a philosophy of government as much as gooey marketing posing as principle. Ronald Reagan would have spontaneously burst into flames if he’d uttered such sentiments.

Dissent from Bush was muted for years, in large part because of 9/11 and the Iraq war. Conservatives, right or wrong, rallied to support their president, particularly in the face of shrill partisan attacks from Democrats who seemed more interested in tearing down the commander in chief than winning a war. But the Bush chapter is closing, and the fight to write the next one has begun.

In one corner, there are a large number of bright, mostly younger, self-styled reformers with a diverse — and often contradictory — set of proposals to win back middle-class voters and restore the GOP’s status as “the party of ideas” (as the late Daniel Patrick Moynihan put it).

In another corner are self-proclaimed traditional conservatives and Reaganites, led most notably by Rush Limbaugh, who believe that the party desperately needs to get back to the basics: limited government, low taxes, and strong defense.

What’s fascinating is that both camps seem implicitly to agree that the real challenge lurks in how to account for the Bush years. For the young Turks — my National Review colleagues Ramesh Ponnuru, Yuval Levin, and David Frum, the Atlantic’s Ross Douthat and Reihan Salam, New York Times columnist David Brooks, et al. — the problem is that Bush botched the GOP’s shot at real reform. For the Limbaugh crowd, the issue seems to be that we’ve already tried this reform stuff — from both Bush and McCain — and look where it’s gotten us.

Neither camp has adequately explained where Bush figures in their vision for the future of the party. Is reform going to be a debugged compassionate conservatism 2.0 or a Reaganesque revival of conservative problem solving? Does back-to-basics mean breaking with the precedents of the last eight years or building on them?

The irony is that both camps agree on a lot more than they disagree. The reformers are committed to market principles and reducing the size and role of government, and so is the back-to-basics crowd. The problem is that an elephant named George in the room is blocking each side from seeing what the other is all about. But hopefully not for much longer.

— Jonah Goldberg is the author of Liberal Fascism: The Secret History of the American Left from Mussolini to the Politics of Meaning and editor-at-large of National Review Online.