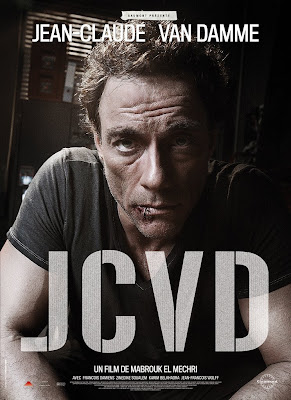 On the phone the other day Jean-Claude Van Damme, the martial artist and action hero known in his heyday as the Muscles from Brussels, was sounding anxious and apologetic. He had canceled a trip to New York — missing a host of engagements, including an in-person interview with this writer — to remain in Bangkok, where he recently finished shooting a movie. And he wanted to make clear that he had a very good reason.

“I adopted seven dogs here, and one of them had a heart attack,” Mr. Van Damme said. “I’m sleeping with him every night at the clinic. If I leave him, he’s going to go back into a coma. He’s a very sensitive dog.” The others — all strays, some disabled (he built “a little wheelchair” for one of them) — have been sent to his home in Belgium.

It might be odd to think of Mr. Van Damme, a veteran of steroidal exploitation cinema and a virtuoso of the bone-crunching split kick, as an old softie, but it is also perfectly consistent with the image overhaul implicit in his latest vehicle, “JCVD,” which opened on Friday. Directed by the French filmmaker Mabrouk El Mechri, it allows its namesake to reveal new facets to his screen persona basically by playing himself. A jokey hall-of-mirrors movie with a melancholic streak, it stars Mr. Van Damme — who turned 48 last month and whose last film to open theatrically in the United States was the 1998 flop “Knock Off,” — as Jean-Claude Van Damme, a washed-up middle-aged movie star.

Thanks in part to a widely circulating online trailer “JCVD” has garnered more attention for Mr. Van Damme than he has received in years. (The last time he made even a remote impact on pop-culture consciousness was when he appeared on “Friends” as himself in 1996 and boasted that he could crush a walnut with his buttocks.) “JCVD” was a word-of-mouth hit at Cannes, and it had its North American premiere at a raucous midnight screening at the Toronto International Film Festival.

The movie’s real-life back story is the familiar, even classic, rise and fall of Mr. Van Damme’s career. He got his break by impressing the Israeli movie mogul Menahem Golan with a kickboxing demonstration. His early films (“Bloodsport,” “Kickboxer”) were slapdash cheapies, often set in vaguely exotic Asian locales and revolving around mano-a-mano fisticuffs that show off his moves (especially those trademark splits, developed from studying ballet and karate as a kid).

In the ’90s he graduated to slicker studio fare like “Universal Soldier” and “Timecop,” often working with fellow expats who were just starting out in Hollywood (the German-born Roland Emmerich, the Hong Kong directors John Woo and Tsui Hark). But his personal life started to unravel: messy divorces (he has been married five times), an extravagant cocaine habit, an arrest for drunken driving.

He soon slid back down the B-movie totem pole. Before “JCVD” 13 consecutive Van Damme films had bypassed theaters in this country. With interchangeable plots and titles (“In Hell,” “Inferno,” “Until Death”), they were often shot in low-cost locations like Bulgaria and Romania.

The years in the straight-to-video ghetto took a toll on his pride. “I wanted to be back on the big screen,” he said. He sensed an opportunity when Marc Fiszman, a French producer, asked if he would consider playing himself in a meta-movie. (Mr. Fiszman’s previous film was the comedy “Jean-Philippe,” starring the singer Johnny Hallyday as a parallel-world version of himself.) A script was commissioned, eventually ending up with Mr. El Mechri, a young director who had some success with his first film, “Virgil” (2005).

“It was a ‘Die Hard’-ish kind of parody,” Mr. El Mechri said of the original screenplay. “It was just mocking, and it was obviously written by people who didn’t know Jean-Claude at a fan level.” Mr. El Mechri rewrote the script to incorporate a “Dog Day Afternoon”-like scenario — Mr. Van Damme’s alter-ego, after losing a humiliating custody battle, stumbles into a hostage situation — and drew liberally on the star’s biography and persona. 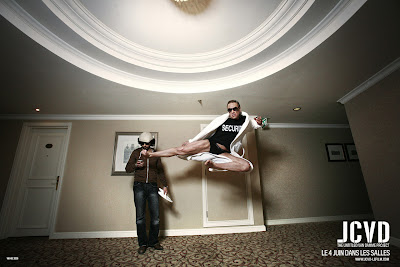 “JCVD” requires Mr. Van Damme openly to recognize the absurdity and indignity of being an aging action hero. “I still train every day,” he said. “I don’t think an actor my age can do what I can do physically, or even one who is 20.” But he added, “I’m 48 years old and to jump off a staircase and do three somersaults in the air — I will not feel the truth in that character today.”

Which is not to say that “JCVD” omits the wham-bam violence that fans term Van Dammage.

It opens with an over-the-top action set piece from a film-within-the-film, complete with gunplay, knife fights and exploding grenades that was shot in a single take and that visibly pushed the star to his limits. “I was completely out of breath to the point of anxiety,” he said.

Mr. Van Damme’s more sensitive side is on jaw-dropping display in the movie’s pièce de résistance, a soul-baring six-minute monologue with more emoting than in all his other roles put together. His eyes tearing up and his voice quavering, he reflects on his dreams and failures, and effectively head-butts the fourth wall. (“I truly believe it’s not a movie.”)

The scene came about when Mr. Van Damme, feeling apprehensive on the eve of the shoot, told Mr. El Mechri that he thought the film was still missing a deeper candor. Mr. El Mechri proposed a long, to-the-camera address. Mr. Van Damme said he felt “completely naked” while delivering his monologue.

When he watched it for the first time, he remembers thinking, “I didn’t lie.” He added, “It was scary for me to do it in French.” French is his native language, but this is his first French-speaking lead role, and he has been mercilessly mocked for spouting Zenlike aphorisms in Franglais on French television. (“Je suis aware.”)

Filled with whiplash digressions and weirdly poetic grace notes, the show-stopping speech is actually a fair approximation of how he really speaks. On his disillusionment with celebrity, he said: “I was so hungry for fame — not for fame, no — well, let’s be honest, hungry for fame, hungry for love. But then fame came, and it was not existing.”

On being engaged with his movies: “I want to be involved in that nine-month process. It’s like making a baby. You make love, and it’s the full way to delivery. How can I be mentally pregnant with the film all the way?”

His next film, which bears the most un-Van Damme-ian title “Full Love,” would seem to offer full-on mental pregnancy: he serves as actor, writer, director and producer. He will only say that it is set in 1960s Louisiana and present-day Southeast Asia and that it will have “a controversial message.”

The shift to directing is part of a larger attempt to reinvent, or at least reclaim, his career. Moving forward he would like to be seen as “an action character hero instead of an action star.” And he’s convinced that he has embarked on the right path. “It’s difficult to make a bad movie after an experience like ‘JCVD,’ ” he said.

He acknowledged the importance of personal stability. He remarried his second wife, the bodybuilder Gladys Portuguese, and is reunited with his children. After years in Los Angeles he now divides his time between Belgium and Hong Kong, where he has shot several films and feels wholly at home.

“I want people to see I’ve changed, that this guy is responsible,” he said. “I want to show my family Daddy’s back, like old times.”