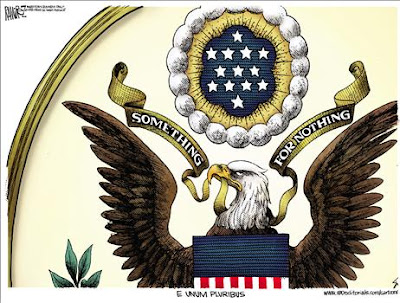 So the answer to my question turned out to be yes, America really was going to do this. A historic moment indeed. The hyperbole for once is not exaggerated: this is a watershed election which changes the fate of the world. The fear however is that the world now becomes very much less safe for all of us as a result. Those of us who have looked on appalled during this most frightening of presidential elections – at the suspension of reason and its replacement by thuggery -- can only hope that the way this man governs will be very different from the profile provided by his influences, associations and record to date. It’s a faint hope – the enemies of America, freedom and the west will certainly be rejoicing today.

America has voted for change, apparently. Change from what, precisely? From Bush? But in the second term, Bush stopped being Bush. His foreign policy lurched from paralysis to appeasement (redeemed only by the strategic genius of Gen Petraeus – and what price Petraeus now?) As Frank Gaffney wrote in the Washington Times yesterday, Bush’s Treasury is about to open the way for sharia law to be imposed upon America’s banking system. And it was a Democrat-controlled Congress that helped provoke the sub-prime lending crisis that triggered the current financial meltdown.

What this election tells us is that America voted for change because America is in the process of changing – not just demographically by becoming less white and more diverse, but as the result of a culture war in which western civilisation is losing out to a far-left agenda which has become mainstream, teaching American children to despise the founding values of their country and hijacking discourse by the minority power-grab of victim-culture.

The reaction of conservatives on both sides of the Atlantic to this undoubted change – not just in the US but in Britain too – shows the intellectual disarray caused by these profound developments. They say politicians must stop trying to hold the cultural line and go instead with the flow of change. In Britain, the Tory party has adopted this strategy. Now there are Republicans saying the same thing.

But John McCain is a Republican who does not fit the old template, who does subscribe to some of this ‘change’ agenda on a number of issues. As a result, he was incapable of attacking Obama on the most important grounds of all: that he stood for values inimical to America’s founding principles. When he did venture into this territory, it was half-cocked and far too late, appearing merely like the desperate throw of a loser. The reason he couldn’t do it earlier was that he had no coherent platform of his own. So why vote for a muddled and erratic quasi-'progressive' when the real thing is a rock star? It cannot be said too emphatically -- the Republicans lost this election. Obama ran a superbly disciplined campaign and he was an impressive candidate, particularly in his calm and stately demeanour throughout. The Republicans screwed up in government, they selected a hopelessly frail and erratic candidate, he ran a shambolic campaign. They deserved to lose.

So now we are promised a change in America’s fundamental values. And they really will be changed. Obama has said in terms that he thinks the US constitution is flawed. America’s belief in itself as defending individual liberty, truth and justice on behalf of the free world will now be expiated instead as its original sin. Those who have for the past eight years worked to bring down the America that defends and protects life and liberty are today ecstatic. They have stormed the very citadel on Pennsylvania Avenue itself.

Millions of Americans remain lion-hearted, decent, rational and sturdy. They find themselves today abandoned, horrified, deeply apprehensive for the future of their country and the free world. No longer the land of the free and the home of the brave; they must now look elsewhere.
Posted by jtf at 11:40 PM