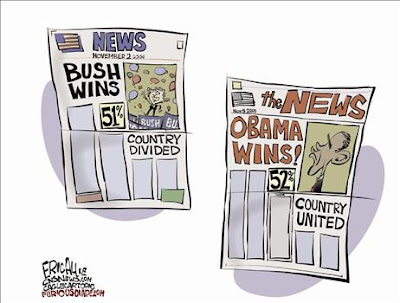 For the first time in 32 years, Democrats got more than 50 percent of the country to vote for their candidate in a national election, and now they want to lecture the Republican Party on how to win elections. Liberal Republicans have joined them, both groups hoping no one will notice that we just lost this election by running the candidate they chose for us.

For years, New York Times columnist David Brooks has been writing mash notes to John McCain. In November 2007, he quoted an allegedly "smart-alecky" political consultant who exclaimed, in private, "You know, there's really only one great man running for president this year, and that's McCain."

"My friend's remark," Brooks somberly intoned, "had the added weight of truth."

Brooks gushed, "I can tell you there is nobody in politics remotely like him," and even threw down the gauntlet, saying: "You will never persuade me that he is not among the finest of men."

That took guts at the Times, where McCain is constantly praised by the op-ed columnists and was endorsed by the paper in the Republican primary. Even Frank Rich has hailed McCain as the "most experienced and principled" of the Republicans and said no one in either party "has more experience in matters of war than the Arizona senator" -- the biggest rave issued by Rich since "Rent" opened on Broadway.

They adored McCain at the Times! Does anyone here not see a cluster of bright red flags?

In January this year, Brooks boasted of McCain's ability to attract "independents."

And then Election Day arrived, and all the liberals who had spent years praising McCain all voted for Obama. Independents voted for Palin or voted against Obama. No one outside of McCain's immediate family was specifically voting for McCain.

But now Brooks presumes to lecture Republicans about what to do next time. How about: "Don't take David Brooks' advice"?

According to Brooks, the reason McCain lost was -- naturally -- that he ran as a conservative. If only presidential candidates would spurn polls, modern political history, evidence from campaign rallies, facts on the ground and listen to the wishful thinking of Times columnists!

If McCain lost because he ran as a conservative, then how come I knew McCain was going to lose before Brooks did? About the same time Brooks was touting McCain's uncanny ability to attract independents, I was writing, accurately: "John McCain is Bob Dole minus the charm, conservatism and youth."

Using the latest euphemism for "liberal," Brooks complains that "reformist" Republicans like John McCain are forced to run for president as smelly old conservatives: "National candidates who begin with reformist records -- Giuliani, Romney or McCain -- immediately tack right to be acceptable to the power base." (Some "tack" so far to the right they almost adopt the positions in the GOP platform!)

In another sign of how popular liberalism is, liberals have to keep changing their name, like grifters moving from town to town. Liberal Republicans used to be known as "moderates," then "mavericks" or "centrists." I guess now they're "reformists." Why, liberals are so popular they have to disguise themselves for fear of being mobbed by an adoring public!

I gather by "reformist," Brooks means liberal only on the social issues like gay marriage and abortion because -- apart from abortion and gay marriage -- Rudy Giuliani was a right-wing lunatic. He engaged in aggressive policing, cut taxes and government bureaucracies, abolished New York's affirmative action office and was repeatedly denounced as a storm trooper by The New York Times.

The same thing goes for Romney, who also cut taxes and government regulations, but promised Massachusetts voters he would not tinker with their beloved abortion rights.

Ironically, McCain was a liberal on virtually every issue except abortion and gay marriage, but he bashed social conservatives to his friends in the press, so they excused his pro-life voting record as a cynical ploy to get votes in Arizona.

If liberals are going to use their first majority vote in a national election since Helen Thomas was spilling champagne on Liza at Studio 54 to lecture Republicans on how to win elections, I have a tip for them based on the exact same election: Constitutional amendments banning gay marriage passed in every state they were on the ballot -- Florida, Arizona, even in liberal California.

Let's see, who was avidly pro-gay-marriage? Oh I remember: The guy who's once again lecturing Republicans on how to win elections: David Brooks.
Posted by jtf at 10:53 AM