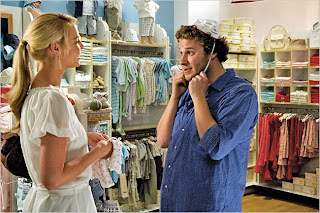 Bye-Bye, Bong. Hello, Baby.
By A. O. SCOTT
The New York Times
June 1, 2007
Katherine Heigl and Seth Rogen in “Knocked Up.”
It may be a bit, um, premature to say so, but Judd Apatow’s “Knocked Up” strikes me as an instant classic, a comedy that captures the sexual confusion and moral ambivalence of our moment without straining, pandering or preaching. Like “The 40-Year-Old Virgin,” Mr. Apatow’s earlier film, it attaches dirty humor to a basically upright premise. While this movie’s barrage of gynecology-inspired jokes would have driven the prudes at the old Hays Office mad, its story, about a young man trying to do what used to be the very definition of the Right Thing, might equally have brought a smile of approval to the lips of the starchiest old-Hollywood censor.
The wonder of “Knocked Up” is that it never scolds or sneers. It is sharp but not mean, sweet but not soft, and for all its rowdy obscenity it rarely feels coarse or crude. What it does feel is honest: about love, about sex, and above all about the built-in discrepancies between what men and women expect from each other and what they are likely to get. Starting, as he did in “Virgin,” from a default position of anti-romantic cynicism, Mr. Apatow finds an unlikely route back into romance, a road that passes through failure and humiliation on its meandering way toward comic bliss.
This improbable — and improbably persuasive — love story is embedded in what looks at first like a nest of sitcom clichés. The central would-be couple, Ben and Alison, represent the kind of schlub-babe pairing seen more frequently on television than anywhere else. Tall, blond and lovely, Alison (Katherine Heigl) has just been promoted to an on-air job at the E! cable network when she meets Ben (Seth Rogen) at a nightclub. He is a pudgy, unkempt stoner who lives with a group of goofball pals. Their ratty communal apartment doubles as the headquarters of their nascent Internet enterprise, a Web site that will collect and catalog movie scenes in which famous actresses appear naked. (It never occurs to them that someone else may already have come up with this ingenious idea. Why else was the Internet invented?)
But Ben, whatever his shortcomings, is friendly and unpretentious, and it does not entirely defy belief when Alison, beer goggles firmly in place, takes him home to bed. Or, rather, to her sister’s house, where she sleeps in a spare room. The sister, Debbie (played by the brilliant Leslie Mann, Mr. Apatow’s wife), is on hand to send darts of envy and disapproval in Alison’s direction and also, along with her husband, Pete (Paul Rudd), to incarnate both the ideal and the nightmare of heterosexual domesticity. Debbie is relentlessly critical, Pete is emotionally withdrawn, and together they dwell in a paradoxical state in which fulfillment — two charming young daughters, a big house with a pool, each other — seems indistinguishable from disappointment.
There is, as I’ve suggested, a certain familiarity to much of this: the bickering married couple; the competent, attractive young woman yoked to a slovenly and unambitious young man; the geeky slackers who communicate entirely through allusions to movies, comic books and old television shows. But Mr. Apatow, a creator of some of the best-loved, least-watched series in recent television history (notably “Freaks and Geeks” and “Undeclared”), has a sly way of subverting these familiar touchstones.
When one of Ben’s sperm, showing more initiative than the man who produced it (and taking advantage of an all-too-believable moment of condom carelessness) hits the reproductive jackpot, the stage seems to be set for a comedy of male panic. But that’s not quite how “Knocked Up” plays. Rather than being afraid of commitment, Ben appears fascinated by the idea, as if it were a distant land chronicled in legend and song. When he learns that Alison has decided to keep the baby — there is a funny, knowing riff on the reluctance of movies and television shows even to use the word “abortion” — he seems genuinely delighted.
Alison is somewhat more hesitant, not about the incipient child but about staying with Ben, whose hold on maturity is less sure than his grip on his favorite bong. She does not entirely trust him, but she likes him enough to worry about forcing him to change his ways. What Alison doesn’t realize — partly because he doesn’t quite either — is that Ben wouldn’t mind changing, if only he could figure out how.

At a moment of crisis Ben calls his father, a nice, tolerant guy played by Harold Ramis, for advice. “Just tell me what to do,” he begs, but no help is forthcoming. (“I’ve been divorced three times. Why are you asking me?”) The absence of a credible model of male adulthood is clearly one of the forces trapping Ben and his friends in their state of blithe immaturity.
Mr. Apatow’s critique of contemporary mores is easy to miss — it is obscured as much by geniality as by profanity — but it is nonetheless severe and directed at the young men who make up the core of this film’s likely audience. The culture of sexual entitlement and compulsive consumption encourages men to remain boys, for whom women serve as bedmates and babysitters. Resistance requires the kind of quixotic heroism Steve Carell showed in “The 40-Year-Old Virgin” or a life-changing accident, like Alison’s serendipitous pregnancy.
“The 40-Year-Old Virgin” and “Knocked Up” are, primarily, movies about men, but Mr. Apatow is too smart, and too curious, to imprison the women in these films in the usual static roles of shrew, sexpot or sensible surrogate mom. Alison is not just Ben’s foil, and Mr. Apatow recognizes that her confusion and anxiety are, ultimately, far more acute and consequential than Ben’s. It’s her body and her future on the line, after all.
Ms. Heigl is allowed to be funny as well as pretty — a rarity in guy-centered comedies — as is Ms. Mann. And Debbie’s frustration in marriage is given at least as much emotional and dramatic weight as Pete’s.
I realize that much of what I have said about it makes “Knocked Up” sound like a pretty heavy picture, pregnant (sorry!) with seriousness and social significance. But since the birth of the talkies the best American movie comedies have managed to confront grave matters and to defy their own gravity.
In this case the buoyant hilarity never feels weighed down by moral earnestness, even though the film’s ethical sincerity is rarely in doubt. The writing is quick and sharp, and the jokes skitter past, vanishing almost before you can catch them. Rather than toggle back and forth, sitcom-style, between laughter and tears, Mr. Apatow lingers in his scenes long enough to show that what is funny can also be sad and vice versa.
“Knocked Up” made me smile and wince; it made me laugh and almost cry. Above all it made me happy.
“Knocked Up” is rated R (Under 17 requires accompanying parent or adult guardian). It finds abundant humor in the details — and the very existence — of the human reproductive system.
KNOCKED UP
Opens today nationwide.
Written and directed by Judd Apatow; director of photography, Eric Edwards; edited by Brent White and Craig Alpert; music by Loudon Wainwright and Joe Henry; production designer, Jefferson Sage; produced by Mr. Apatow, Shauna Robertson and Clayton Townsend; released by Universal Pictures. Running time: 129 minutes.
WITH: Seth Rogen (Ben Stone), Katherine Heigl (Alison Scott), Paul Rudd (Pete), Leslie Mann (Debbie), Jason Segel (Jason), Jay Baruchel (Jay), Jonah Hill (Jonah) and Harold Ramis (Ben’s Dad).
Posted by jtf at 9:34 AM