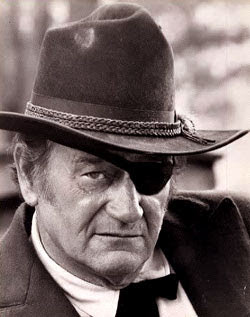 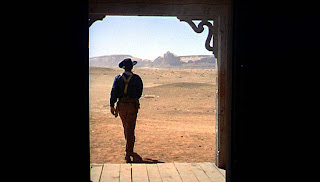 John Wayne as John Bernard Books in The Shootist:

"I won’t be wronged, I won’t be insulted, and I won’t be laid a hand on. I don’t do these things to other people and I expect the same from them.”

I was seven years old when I first met John Wayne. It was a Saturday night. My parents were remodeling an old house and my Dad liked to work late into the evenings, and I liked to help. That usually meant awkwardly holding the end of a board he sawed or running to get another one of the twenty Coca Cola’s he drank a day. It also meant I mostly watched the Late Show on a little TV in the basement until beckoned.

I can still taste the ever present sawdust in my throat and feel the chill of that basement. This was winter in Wisconsin, after all, and I would shiver and huddle against a menacing looking furnace waiting for it to switch on. The old black and white television sat atop the workbench, its rabbit ears our only source of entertainment in those days when ”cable” still meant sending a telegram.

There was a double feature that night: Hatari! and Rio Bravo. One set in modern Africa, the other in the Old West. Hatari! has no story. Rio Bravo has a great one. It didn’t matter to me. I was hooked. That night Dad’s Cokes would have to wait for a commercial break.

There was just something about John Wayne. It wasn’t only that — story or no — both films were wildly entertaining. There was something more. Something about the man. It was his code. His presence. His charm and ease with himself. It was his refusal to be flustered by any danger or any individual other than a pretty girl. He was brave and honest and trustworthy. He was a man of his word who saw things in black and white. He knew the difference between right and wrong, and gave wrong no quarter. For an awkward kid navigating the hell of second grade and the daily humiliation of being picked last for kickball there was some comfort in knowing the world really wasn’t all that complicated. You just had to simplify it yourself.

John Wayne still inhabited our world then. Better, he was still making films. The next time I saw him was on the big screen. He was Brannigan. Initially I was shocked at how much older and heavier he’d gotten. But that was quickly forgotten because what really mattered was still there. Even at sixty-eight the Duke held the screen; his effortless charm and booming voice pulling off the weak script. He would only make two more films. The cancer he had previously whipped was laying for him; waiting for the unfair advantage of his age to seek its revenge. Rooster Cogburn I would see at the drive-in. The Shootist would have to wait for television.

I was thirteen when John Wayne died; in middle school. It was 1979 and the Duke was already being written off as an anachronism: An uncool old-fashioned artifact of a bygone era that still believed America won wars and a line existed between right and wrong. I didn’t know anything about that. Didn’t understand it. Didn’t care. All I knew was that I liked him and I liked his movies; and no amount of teasing could stop me from wearing a t-shirt with his image — it would take the insidious effects of repeated trips in the washing machine to do that.

In the hurly-burly of teenagerdom the Duke got lost for a few years. Before rediscovering him I would (barely) graduate high school, become a liberal Democrat, meet, fall in love, and move in with The Hot Little Number I Call Mrs. Harry, and buy into the revisionists who were hard at working picking away at John Wayne’s legacy. He’d been branded a racist and worse. His acting had been written off as simple and his films as bigoted. The marginalization of the Duke had begun.

There was a library across the street from that cramped little one bedroom apartment The Hot Little Number and I couldn’t wait to get out of and would now give anything to go back to. At this library video rentals were free. And I went through a lot of them — you know, the cool classics — before giving in to a John Wayne film. It was The Searchers. The greatest film ever made. The greatest performance ever given. And my favorite film ever since.

The same year I voted for Michael Dukakis I watched every John Wayne film available on video. It would be disengenous to say that had anything to do with my eventual conversion to conservatism (it would take the Democrats opposing school choice and undermining the first Gulf War to do that) but there were moments in those films that have forever stayed with me. Life lessons about what’s a man and what kind of world we could live in.

I remember Sergeant Stryker going up to a woman’s apartment for sex and after discovering he’d been hustled for baby food giving her all his money and graciously leaving.

I remember Colonel Kirby boiling down a conflict to its most compassionate and liberal element by telling a young Vietnamese boy that he was why we were there.

I remember Davy Crockett speaking as eloquently about the bravery and decency of the men in Santa Ana’s army as he did about democracy.

I remember J.D. Cahill telling the prisoners that if they don’t like the treatment they shouldn’t rob the banks.

And I remember learning about the poison of racism through Ethan Edwards.

Not all the films were great, but he always was. And so the same year I voted for Michael Dukakis I also became a lifelong fan of John Wayne. He would never get left behind again. As my tastes changed, the Duke came right along. From masterpieces to small character studies to the arty and eccentric, I always found John Wayne. He played dark and complicated characters. He made a number of those small undiscovered gems that took years to appreciate. And he has made me laugh as hard as anyone.

Discovering John Wayne the man has been just as fulfilling. Childhood heroes rarely survive biographical scrutiny. The Duke was far from perfect, but he he was a good man, a loyal friend, and generous to a fault. The so-called racist married three Hispanics. Liberals came on set expecting arguments, instead they found a well read and thoughtful man interested in a good discussion over chess. Rock Hudson expected a gay-basher and found a lifelong friend. In 1974 under the pretense of an award, the Harvard Lampoon invited him for what became a series of derogatory and insulting questions. Before he was done his disarming self-deprecating answers had completely won the hostiles over.

If I were to describe John Wayne in a word it would be “gracious.” A rare quality these days. One not found in any of today’s “political” actors.

Today John Wayne’s won another battle. He’s whupped the revisionists who tried to smear him after his death. With home video and cable the greatness of his work and talent has overcome the liars. And his affection among the public has only grown. He’s the only deceased actor ever to place on the Harris Poll of favorite movie stars. He’s made the top ten every year since and this year managed to move up to third. He is unquestionably the greatest and most popular movie star in the history of film.

If you really want to get to know John Wayne — at least as well as anyone can anymore — go to Monument Valley. Talk to the people who knew him. Who worked with him. Talk to the Navajo. Yes, talk to the American Indian. I did and wrote a bit about it here. Could there be a finer testament to the man? Only one:

If you really want to get to know John Wayne, listen to his children. Listen to how they speak of him and look at how happy and well-adjusted they are. None of the usual kids-of-a-movie-star nonsense. Wayne’s legacy is the enduring respect and love of his children. That’s the true measure of a man.

Happy 100th Birthday, Duke. Thanks for everything, but most especially for not ever disappointing me.