Joseph L. Galloway: Some applause for the willing 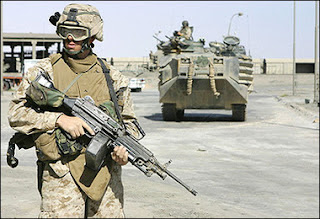 It's that time of year again. Memorial Day weekend is the beginning of summer fun for most Americans, and as I've done before, I want to pause to take note of the real reason there is a Memorial Day.

It's meant to honor and pay our respects to those Americans who've given their lives in service to our nation, who stand in an unbroken line from Lexington's rude bridge to Cemetery Ridge to the Argonne Forest to the beaches of Normandy to the frozen Chosin Reservoir to the Ia Drang Valley to the sands of Kuwait to the streets of Baghdad.

Over the past 12 months, 1,042 soldiers, Marines, sailors and Air Force personnel have given their lives in the terrible duty that is war. Thousands more have come home on stretchers, horribly wounded and facing months or years in military hospitals.

I'm turning my space over to a good friend and former roommate, Army Lt. Col. Robert Bateman, who recently completed a yearlong tour of duty in Iraq and is now back at the Pentagon.

Here's Lt. Col. Bateman's account of a little-known ceremony that fills the halls of the Army corridor of the Pentagon with cheers, applause and many tears every Friday morning. It first appeared on May 17 on the Web-log of media critic and pundit Eric Alterman at the Media Matters for America Web site.

"It is 110 yards from the "E" ring to the "A" ring of the Pentagon. This section of the Pentagon is newly renovated; the floors shine, the hallway is broad, and the lighting is bright. At this instant the entire length of the corridor is packed with officers, a few sergeants and some civilians, all crammed tightly three and four deep against the walls. There are thousands here.

"This hallway, more than any other, is the 'Army' hallway. The G3 offices line one side, G2 the other, G8 is around the corner. All Army. Moderate conversations flow in a low buzz. Friends who may not have seen each other for a few weeks, or a few years, spot each other, cross the way and renew. Everyone shifts to ensure an open path remains down the center. The air conditioning system was not designed for this press of bodies in this area. The temperature is rising already. Nobody cares.

"10:36 hours: The clapping starts at the E-Ring. That is the outermost of the five rings of the Pentagon and it is closest to the entrance to the building. This clapping is low, sustained, hearty. It is applause with a deep emotion behind it as it moves forward in a wave down the length of the hallway.

"A steady rolling wave of sound it is, moving at the pace of the soldier in the wheelchair who marks the forward edge with his presence. He is the first. He is missing the greater part of one leg, and some of his wounds are still suppurating. By his age I expect that he is a private, or perhaps a private first class.

"Captains, majors, lieutenant colonels and colonels meet his gaze and nod as they applaud, soldier to soldier. Three years ago when I described one of these events, those lining the hallways were somewhat different. The applause a little wilder, perhaps in private guilt for not having shared in the burden ... yet.

"Now almost everyone lining the hallway is, like the man in the wheelchair, also a combat veteran. This steadies the applause, but I think deepens the sentiment. We have all been there now. The soldier's chair is pushed by, I believe, a full colonel.

"Behind him, and stretching the length from Rings E to A, come more of his peers, each private, corporal or sergeant assisted as need be by a field grade officer.

"They pass down this corridor of officers and applause, and then meet for a private lunch, at which they are the guests of honor, hosted by the generals. Some are wheeled along. Some insist upon getting out of their chairs, to march as best they can with their chin held up, down this hallway, through this most unique audience. Some are catching handshakes and smiling like a politician at a Fourth of July parade. More than a couple of them seem amazed and are smiling shyly.

"There are families with them as well: the 18-year-old war-bride pushing her 19-year-old husband's wheelchair and not quite understanding why her husband is so affected by this, the boy she grew up with, now a man, who had never shed a tear is crying; the older immigrant Latino parents who have, perhaps more than their wounded mid-20s son, an appreciation for the emotion given on their son's behalf. No man in that hallway, walking or clapping, is ashamed by the silent tears on more than a few cheeks. An Airborne Ranger wipes his eyes only to better see. A couple of the officers in this crowd have themselves been a part of this parade in the past.

"These are our men, broken in body they may be, but they are our brothers, and we welcome them home. This parade has gone on, every single Friday, all year long, for more than four years." -- (Copyright 2007 by Robert Bateman; reprinted here by permission.)

Thanks, Bob, for this Memorial Day gift.

(Joseph L. Galloway is former senior military correspondent for Knight Ridder Newspapers and co-author of "We Were Soldiers Once ... and Young.")
Posted by jtf at 8:50 AM