Charles Krauthammer: Get in Line, Einstein 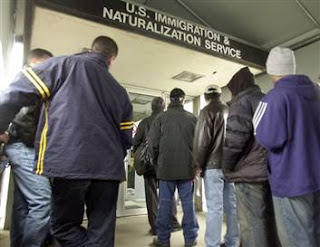 WASHINGTON -- Beware legislative behemoths. Beware "comprehensive immigration reform." Any bill that is 380 pages long is bound to have nooks and crannies reflecting private deals, quiet paybacks and ad hoc arrangements that you often don't learn about until it's too late.

The main provisions of the immigration reform monster are well known. But how many knew, before reading last Saturday's Washington Post, that if Einstein were trying to get a green card, he would have to get in line with Argentine plumbers and Taiwanese accountants to qualify under the new "point system" that gives credit for such things as English proficiency and reliable work history? Good thing Albert was a patent office clerk, and that grooming isn't part of the new point system.

Until now we've had a special category for highly skilled, world-renowned and indispensable talent. Great musicians, athletes and high-tech managers come in today under the EB-1 visa. This apparently is going to be abolished in the name of an idiotic egalitarianism.

I suspect this provision is a kind of apology for one of the few very good ideas in the bill -- taking skill, education and English proficiency into account rather just family ties, and thus cutting back on a chain migration system in which the Yemeni laborer can bring over an entire clan while the engineers and teachers desperate to get here languish in the old country.

The price for this lurch into rationality appears to be the abolition of the VIP fast track, which constitutes less than 2 percent of total immigration and, from the point of view of the national interest, is the most valuable. This staggeringly stupid idea is reason alone to vote against the immigration bill.

Beyond stupidity, the bill offers farce. My favorite episode is the back-taxes caper. John McCain has been going around telling everyone that in order to be legalized, illegal immigrants will, among other things, have to pay back taxes. Such are the stern requirements on the "path to citizenship."

Problem is, McCain then discovered that back taxes were not in the bill. The Homeland Security Department had argued that collecting on money paid under the table -- usually in cash, often with no receipts -- is pretty much impossible. Indeed, the cost of calculating and collecting the money would probably exceed the proceeds.

Now, nonpayment is not the kind of thing you want to defend when trying to sell immigration reform to citizens who do pay their taxes -- back and otherwise. So last week, John McCain proposed an amendment to restore the back-taxes provision. A somewhat sheepish Senate approved this sop -- unanimously.

But the campaign for legalization does not stop at stupidity and farce. It adds mendacity as well. Such as the front-page story in last Friday's New York Times claiming that "a large majority of Americans want to change the immigration laws to allow illegal immigrants to gain legal status."

Sounds unbelievable. And it is. A Rasmussen poll had shown that 72 percent of Americans thought border enforcement and reducing illegal immigration to be very important. Only 29 percent thought legalization to be very important. Indeed, when a different question in the Times poll -- one that did not make the front page -- asked respondents if they wanted to see illegal immigrants prosecuted and deported, 69 percent said yes.

I looked for the poll question that justified the pro-legalization claim. It was question 61. Just as I suspected, it was perfectly tendentious. It gave the respondent two options: (a) allow illegal immigrants to apply for legalization (itself a misleading characterization because the current bill grants instant legal status to all non-criminals), or (b) deport them.

Surprise. Sixty-two percent said (a). That's like asking about abortion: Do you favor (a) legalization or (b) capital punishment for doctor and mother? There is of course a third alternative: what we've been living with for the last 20 years -- a certain tolerance of illegal immigrants that allows 12 million to stay and work but denies them most of the privileges and government payouts reserved for legal citizens, and thus acts as at least a mild disincentive to even more massive illegal immigration.

Indeed, unless the immigration bill is fixed, that alternative is what the country will in essence choose when the bill fails. My view is that the current bill could be fixed with a very strong border control provision. But even then, let's make sure we know what's really in the bill and not distort what the American people are really demanding, which is border control first. And for god sakes, keep Einstein on the fast track.

letters@charleskrauthammer.com
Posted by jtf at 9:09 AM