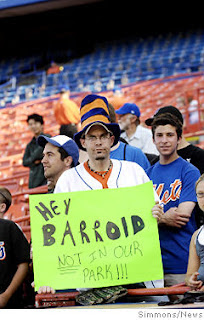 
He comes out of the dugout at a little after 5:30 in the afternoon at Shea Stadium, nine home runs away from the great Henry Aaron, the crowd of television cameras and reporters and photographers moving with Barry Bonds as he moves slowly toward the batting cage, almost in slow motion. The crowd is always there with him. It is just most of the faces and the cities that change. Tonight it is New York and Shea, then Philadelphia, then Arizona, then back to San Francisco. The pursuit of Aaron has become like some low-speed chase.

Or like some big wrestling tour. Or circus. But then this whole thing crossed the clown line a long time ago.

Bonds slowly chases Aaron. The media crowd, which will get bigger the closer he gets to 756, chases him. Everybody had expected Bonds to talk to the media at Shea yesterday. He did not. He wasn't going to be dumb enough to talk about steroids, anyway. Not everybody is a talker like Giambi.

When Bonds got on the field, he talked to Tony Bernazard, the Mets' vice president of player development, then to Charlie D'Amodio, a field supervisor who has known Bonds, just from his visits to Shea, a long time. Charlie even managed to get a laugh out of him.

"I guess I was somebody to schmooze with about something other than baseball," Charlie said. "Or steroids."

Bonds is the biggest story in sports, not just baseball, because of Aaron and because of steroids. His tour, this circus, comes to New York this week. Even if he has no chance to break the record here.

When Bonds stepped out of the Giants dugout last night, the fans behind the dugout cheered, most of them, and some chanted his name. Then at 5:40 he got into the cage and began to show off, even halfheartedly, one of the most beautiful and efficient swings any ballpark has ever seen, in any city, or any era.

He was one of the great players of all time before all the drugs we read about in "Game of Shadows." He would have been called that if he had kept hitting 30 home runs a year. But he went a different way, and if you think he didn't, the way Barry Zito doesn't in the new ESPN magazine - in a piece that sounded like the runner-up in a fifth-grade essay contest - then you think Mark Fainaru-Wada and Lance Williams, the authors of "Game of Shadows," made it all up.

Barry Bonds, who did not play in Tuesday night’s game at Shea Stadium, emerged early from the Giants’ dugout to face a gaggle of cameras and news media.

And if that is the case, Bonds should own his own publishing house by now, and the San Francisco Chronicle newspaper.

Bonds was supposed to talk and didn't yesterday. And he didn't start against Oliver Perez, a lefthander who has given him fits. Between 5:30 and 6 there was just these lazy swings, all eyes in the place on him, the way they will be until 756. And as always you watched him and wondered how it all could have been different for him.

There is no positive test on him for steroids, just amphetamines. There is just the laundry list of drugs in that book, without the word "alleged" in there anywhere. It does not make Bonds more guilty than the guys who have gotten busted since drug testing went into effect. Baseball got Rafael Palmeiro, who said it must have happened to him because of a tainted B-12 shot. Baseball got the Mets' Guillermo Mota, too, even if Mota at least had the good grace not to deny the whole thing.

Bonds just happens to be the biggest star of his game, in all ways, the beefed-up, bulked-up guy whose career changed after the age of 35 the way his body did and is now about to break Aaron's record and has decided that nobody can stop him, not the government, not the baseball commissioner, nobody.

At Shea he takes the swings he is going to take in his abbreviated batting practice. He comes back around the cage, sees a face he recognizes from television.

"You still on that show?" he asks.

He walks away, strolls back past the media, down the Giants dugout, disappears. It is New York for him tonight. As far as Bonds is concerned, it could be anywhere. They are all there to see him and he knows it. Strangest, saddest tour in all of sports history.

Outside, the fans are still coming in from the parking lots and the Willets Point station. Near one of the will-call windows is Ken Iacogacci Jr., Fair Lawn, N.J., wearing a Giants cap and an orange Bonds T-shirt.

Iacogacci is asked about the outfit.

"But you're here to root for him."

"How about a whole book about the drugs he took to hit home runs," he is told.

"So what about McGwire?" Iacogacci says. "You see the Maris family when McGwire broke Roger's record? You see them hug him? You tell me they weren't hugging steroids?"

"Yeah, and I know Mickey Mantle was no saint, either. You want to hear stories about what he was like when he was hungover and he didn't want to sign an autograph for some kid?"

"Do the drugs bother you?" Iacogacci is asked finally.

"You want the truth?" he said. "Yeah, they bother me. But tell me something: What am I gonna do about it now?"

Bonds did not get in the game until the 10th. But this is what they had come to see, both Giants fans and Mets fans. The Mets fans got loud and chanted about steroids. Bonds walked, swinging the bat only once. Not much of a circus on this night, a night when the only swing to remember belonged to Carlos Delgado, and neither Shea nor the baseball season was the property of Barry Bonds.
Posted by jtf at 7:00 AM