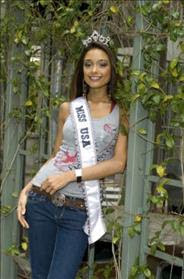 Newly-crowned Rachel Smith, Miss USA 2007, poses in her new Mikimoto tiara, YMI Jeans and Ritmo Mundo watch in downtown Los Angeles March 24, 2007, the morning after winning her title. The 21-year-old from Clarksville, Tennessee, will spend her year-long reign making special appearances on behalf of the Miss Universe Organization, its sponsors and affiliated charities.

The United States government is on the verge of approving a mass amnesty to millions of illegal aliens -- a plan pushed aggressively by meddling Mexican officials who reap billions of dollars in remittances (illegal aliens' earnings sent back to Mexico) without having to lift a finger to clean up their own country.

And the thanks we get? Internationally televised public humiliation.

On Monday night, the beautiful young woman who represented America in the Miss Universe pageant was booed and mocked as she competed on stage in Mexico City. Rachel Smith, 22, did her best to respond with grace and dignity during the Top Five finalists' interview segment as the audience disrupted the event.Definitely not this one.

Smith soldiered through her answer, describing an educational trip to South Africa. Catcalls and whistles nearly drowned out Smith's reply until she wrapped up with "Buenos noches, Mexico."

I wouldn't have been so polite.

None of Miss USA's fellow Americans participating in the interview segment -- neither Minnillo, nor macho co-host Mario Lopez, nor the dashing Romo -- came to Smith's defense. Instead, Minnillo pleaded briefly with the unruly mob: "Okay, una momento, por favor." Lopez stood mute with a dumb grin on his dimpled face. Pathetic.

In fact, Smith was subjected to anti-American hatred throughout the week-long event. Last week, during the contestants' national costume fashion show, Smith smiled bravely as a rowdy outdoor crowd hissed and booed at her. According to pageant observers, no other contestants received such treatment.

Pitifully, Donald Trump and his Miss Universe officials are downplaying Smith's experience -- ignoring the fact that the last time the pageant was held in Mexico, Miss USA was abused in similar fashion. 1993 Miss USA Kenya Moore was infamously heckled when chosen for the semi-finals that year.

Just a tiny minority of America-haters, right? How quickly we forget.

Do you remember what happened in Guadalajara in 2004 during an Olympics qualification soccer match between the U.S. and Mexico? The stadium erupted in boos during the playing of "The Star-Spangled Banner." Fans yelled "Osama! Osama!" as the U.S. was eliminated by Mexico.

One Mexican fan told the Christian Science Monitor: "'Every schoolboy knows about 1848. . . . When they robbed our territory,' referring to when Texas, California and New Mexico were annexed to the U.S. as part of a peace treaty ending the war between the two countries, 'that was the beginning.'"

This bitterness is long-standing, deep-seated and stoked by top Mexican government officials and elites. But pointing this reality out in the context of our crucial national debate over sovereignty, immigration, assimilation, border security and the rule of law will get you labeled a bigot. Our leaders have concluded that it is better to pander, hide, pull out a friendly Spanish phrase like Minnillo did, and pray that the hatred will go away by giving the pro-amnesty lobby its legislative goodie-bag.

Next, they'll tell us the mob at the Miss Universe pageant was simply "doing the booing Americans won't do."

Will President Bush speak out against the treatment Miss USA received in Mexico? Will any amnesty peddler in Washington? Imagine if Miss Mexico were booed, heckled and subjected to chants of "USA, USA" if the pageant had been held here.

Smith can hold her head up high. Those who are selling out our country, on the other hand, should hang their heads in shame.


Michelle Malkin makes news and waves with a unique combination of investigative journalism and incisive commentary. She is the author of Unhinged: Exposing Liberals Gone Wild.
Posted by jtf at 9:26 AM