Ann Coulter: A Green Card in Every Pot 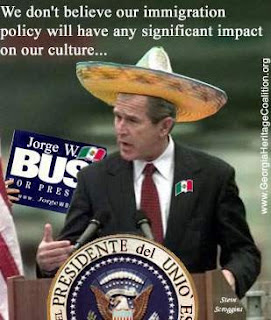 Americans – at least really stupid Americans like George Bush – believe the natural state of the world is to have individual self-determination, human rights, the rule of law and a robust democratic economy. On this view, most of the existing world and almost all of world history is a freakish aberration.

In fact, the natural state of the world is Darfur. The freakish aberration is America and the rest of the Anglo-Saxon world.

The British Empire once spread the culture of prosperity around the globe – Judeo-Christian values, tolerance, equality, private property and the rule of law. All recipients of the British Empire's largesse benefited, but the empire's most successful colony was the United States.

At the precise moment in history when the U.S. has abandoned any attempt to transmit Anglo-Saxon virtues to its own citizens, much less to immigrants, George Bush wants to grant citizenship to hordes of immigrants who are here precisely because they are fleeing cultures that are utterly dysfunctional and ruinous for the humans who live in them.

Yes, this country has absorbed huge migrations of illiterate peasants in the past – notably Italian immigrants at the turn of the last century. But also notably, half of them went back. We got the good ones. America was not yet a welfare state guaranteeing room and board to the luckless, the lazy and the incompetent from cradle to grave.

Supreme Court Justice Louis Brandeis, immigrant and first Jewish member of the Supreme Court, said that Americanization required that the immigrant adopt "the clothes, the manners and the customs generally prevailing here" and that he adopt "the English language as the common medium of speech."

But, Brandeis said, this is only part of it. "(W)e properly demand of the immigrant even more than this – he must be brought into complete harmony with our ideals and aspirations and cooperate with us for their attainment. Only when this has been done will he possess the national consciousness of an American."

I wish our new immigrants had come to America back when the foundations of civic society and patriotism were still inculcated in all immigrants (and when half of them went home). But traitors who are citizens have destroyed all acculturating institutions. Traitors who are citizens have also destroyed all incentive for the poor to work or even keep their knees together before marriage.

Until the recipient culture is capable of doing an effective job of Americanizing immigrants, it's preposterous to talk about a massive influx of Hispanic immigrants accomplishing anything other than turning America into yet another Latin American-style banana republic. And it is simply a fact that no one is trying to turn immigrants into Americans.

In an astonishing exchange on Fox News last weekend, Dan Henninger of the Wall Street Journal responded to Heather MacDonald's point that Hispanics in this country have a 50 percent illegitimacy rate, the highest teen pregnancy rate of any group and the highest high school drop-out rate of any group, by asking: "Why don't we feel we are under cultural assault in New York City? You have no sense of this at all here."

You also have no sense of the existence of a middle class in New York City. The rich have hidden the evidence, transplanting all but the massively wealthy to the suburbs. Manhattan is white and getting whiter, while the boroughs are noticeably less white and more dysfunctional.

As Mac Johnson wrote in Human Events last year, these immigrant protests represent "the colonization of America by the Latin style of politics." He listed just some of the demonstrations drawing thousands – sometimes hundreds of thousands – of protesters over the last few years in Mexico alone. Among the targets of the protests were a new regional trade pact, plans to allow private investment in the state-owned electricity industry, energy and tax reforms, and support for the mayor of Mexico City.

In 1993 – long before 9-11, before the USS Cole bombing, before the bombing of our embassies in Kenya and Tanzania – the eminent Harvard political scientist Samuel P. Huntington predicted that the greatest threat to Western civilization would come from a clash of civilizations, noting with particular concern the "bloody borders" of the Muslim world.

So it ought to be of some interest that Huntington is now predicting, in his book Who Are We? The Challenges to America's National Identity, that America cannot survive the cultural onslaught from Latin America.

American Hispanics responded to Huntington's book with a flurry of scholarly papers and academic debates to counter his thesis that Mexicans were not assimilating.

Just kidding! They called for national protests against Huntington, his publisher and Harvard University.


Ann Coulter is a bestselling author and syndicated columnist. Her most recent book is Godless: The Church of Liberalism.
Posted by jtf at 6:41 AM

It's a bit rich of Coulter to decry the lack of scholarly papers and academic debates on this subject or indeed any, given her own weak attacks on evolution.

We're still awaiting her own papers submitted for peer-review on the subject. Or failing that she could reference any scholarly papers on problems with evolution.

Instead she just deals with junk-science.