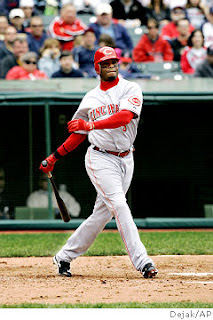 
He hit another one Friday night, got a little closer to a magic home run number, got closer at the same time to passing one of the most famous home run hitters in all of baseball history. It is 19 seasons for him now in the big leagues, and he is not what he was. But he is still something to see, especially when he connects the way he did against Paul Maholm of the Pirates. Not Barry Bonds doing that. Ken Griffey Jr.

The one he hit on Friday night was No. 574 for his career. Griffey passed Harmon Killebrew on the all-time home run list and next comes Mark McGwire at 583, McGwire the one who was first to No. 62, which meant the first to pass Roger Maris for the single-season home run record, McGwire being the first to hit 70 home runs in a baseball season.

After that, if Griffey stays healthy, and that is always an "if" with him, maybe he can get to 600 this season. And maybe he can still get to 700.

Once we thought he had to be the first of the modern players to get to 600, 700, maybe even 800. There was a time, before the injuries started to come with Griffey, when we thought he would be the one to get to 60 again, he would be the one to pass Ruth and Maris and even Aaron eventually. It never happened that way. Now all the famous home run seasons and home run records belong to others and it is the same with Griffey as it was with Mickey Mantle, because of the way Mantle's body betrayed him, and there is no way to talk about either career without all the might-have-beens.

It was supposed to be Junior Griffey doing this. Bonds, before his body changed and his career changed, used to call him "the golden child." Bonds said it didn't bother him, the other guy being the golden child, even though it clearly did, even though it was clear that Bonds thought he was a better ballplayer, even before the power surge, than Griffey.

Then it bothered him that two more guys, McGwire and Sammy Sosa - who he didn't think were in his class - had become the home run kings of baseball.

And if you believe "Game of Shadows," Bonds decided to start using what he felt they were using and his body changed and his career changed and then he had 73 home runs and then he was passing Ruth and now he comes into New York this week and Shea Stadium, a handful of home runs behind Aaron. It will be a joyless spectacle, the way it is all spectacle now with Bonds.

You never know when his body will break down for good, so these three games this week, if Bonds plays them all, might be the last chance New York gets to see him. He started out hot this season, 10 home runs real fast, and lately has been in decline, and even his manager, Bruce Bochy, was quoted this week about how fast old age can come up on you in baseball. He was quick to point out that he still thinks Bonds can hit them out of sight.

Still: Bonds is coming up on 43. Maybe there is nothing he or anybody else can take that can make him young forever.

But then, you never know.

Through the 1999 season, Bonds having three more seasons in the big leagues than Griffey in the books, he had 445 career home runs.

Griffey had 398. Now it is all this time later and Griffey hasn't played 130 games in a season since 2000 and Bonds went on the five-year tear during which he hit 258 home runs and now he was the home run king of baseball, he was the headliner of all the suspected drug users, the heavyweight of the division.

Can I tell you with certainty that any big player in baseball is clean, not a suspect in any way? Of course not. There is no way of knowing. Again: You either believe the reporting in "Game of Shadows" or not. And if the authors of the book made it all up, then ask yourself a question:

Where are the lawyers?

Bonds comes to New York this week, and he continues his chase of what is supposed to be the most glamorous record in sports. It is another occasion to wonder how this all could have been different, if it had been somebody else, if it had been the home run king we thought we were getting 10 years ago, when Junior was still young.
Posted by jtf at 4:07 PM