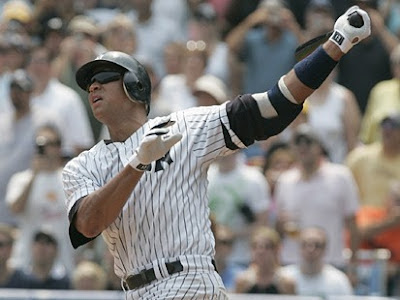 The Yankees are close to having one future Hall of Famer officially in the fold, working out contract language on a new deal for Alex Rodriguez that will reach at least $300 million if Rodriguez sets the career home run record. But closer Mariano Rivera remains unsigned as he waits for a four-year offer.

Rodriguez and his wife, Cynthia, met with Hank and Hal Steinbrenner on Wednesday in Tampa, Fla. Rodriguez told the Steinbrenners that he wanted to stay with the Yankees, and a 10-year contract that will guarantee him about $275 million is expected to be completed soon.

The Yankees typically do not offer bonuses for making All-Star teams or winning postseason awards. But Rodriguez’s pursuit of the career home run record would bring increased revenue to the Yankees, and they are willing to share some of it.

The sides are discussing a marketing plan in which Rodriguez, 32, would benefit financially as he passes home run benchmarks in the coming seasons. He has 518 home runs and is 17th on the career list. If he passes Babe Ruth, who had 714 homers, and Hank Aaron, who had 755, he would trail only Barry Bonds, who has 762.

“These are not incentive bonuses,” Steinbrenner said. “For lack of a better term, they really are historic-achievement bonuses. It’s a horse of a different color.”

Steinbrenner said that the team president, Randy Levine, has been in contact with Major League Baseball to make sure the bonus package complies with a rule that does not allow teams to tie payments to certain individual statistics.

Rivera, meanwhile, has told the Yankees he wants a fourth year added to their three-year, $45 million proposal. General Manager Brian Cashman spoke yesterday with Rivera’s agent, Fern Cuza, but Steinbrenner has no plans to improve the offer, which would make Rivera, who turns 38 this month, the highest-paid closer in baseball.

“They haven’t rejected it outright, as far as I know,” Steinbrenner said. “It’s pretty much known that they’re seeking a fourth year, or more for three years.

“I want him back, and that’s why the offer is as high as it is. We don’t have to change anything. Everyone in baseball knows it’s a great offer; we’ve even gotten a couple of complaints about it.”

The Yankees also have interest in signing Red Sox third baseman Mike Lowell with the idea of moving him to first base. Two Boston television stations reported yesterday that the Yankees had offered Lowell a four-year contract.

Steinbrenner would not comment on those reports, but he said he was not concerned about filling first base, adding that Jorge Posada could move there at the end of his four-year, $52.4 million deal. “There are a lot of things we’re looking into,” Steinbrenner said.

The Rodriguez deal, though, is in the final stages, with his agent, Scott Boras, leaving Rodriguez’s hometown, Miami, to work on the contract language. Boras was not present at the meeting with the Steinbrenners on Wednesday, when an open dialogue intensified negotiations.

“Alex and Cynthia visited with the Steinbrenners and Yankees officials yesterday, and following the meeting, Alex instructed me to discuss contract terms with the Yankees,” Boras said in a statement, his first since the Wednesday meeting.

Two managing directors for Goldman Sachs — John Mallory and Gerald Cardinale — were pivotal in brokering the peace between Rodriguez and the Steinbrenners, who were miffed at Rodriguez for opting out of his contract on Oct. 28.

Mallory works in Los Angeles and knows the Rodriguezes from Miami. The Rodriguezes reached out to Mallory, who called Cardinale, who is based in New York and is a YES Network board member. Cardinale called Levine several days ago and has since been instrumental in putting a deal together.

The Yankees had looked into the trade market for third basemen, but they preferred to save their chips for a run at Minnesota starter Johan Santana, who could become available soon. Rodriguez had sniffed the market, too, but both sides decided they were each other’s best option.

The timing of the reconciliation is intriguing, coming the day after open negotiations began for free agents. No other team had come forward as an aggressive pursuer of Rodriguez. Yet the Yankees made sure to all but lock him up before other teams could realistically make a strong push.

Boras is famous for negotiating massive contracts, but even with the bonus package, this deal will fall short of the 12-year, $350 million contract the Yankees believed Boras sought last month.

Boras had said all along that Rodriguez deserved to explore his right to free agency to determine his market value in a booming industry. In the end, that seemed to be less important than staying in New York.

In making the deal after the start of open free agency, the Yankees committed to 10 years, which was more than their initial overtures to Rodriguez.

In October, the Yankees were prepared to give Rodriguez a five-year extension beyond the three years left on his contract, which included a $21.3 million subsidy from the Texas Rangers.

The 10-year deal is in place now, after weeks of acrimony stemming from a messy break-up. The Yankees and Rodriguez are engaged again, to honor and cherish, to have and to hold, for richer and richer and richer.
Posted by jtf at 8:22 AM