Review: Bruce back with 'Magic' show 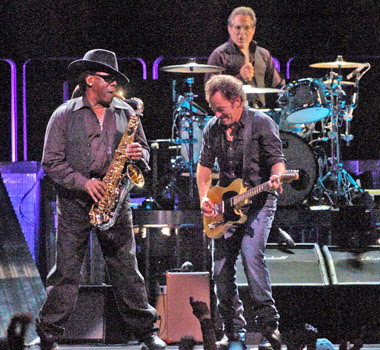 To be sure, there were moments of sheer and utter brilliance during Bruce Springsteen and the E Street Band's concert Wednesday at the Mellon Arena.
But more prevalent were the moments of recognition, the merging of the performers with the audience, a union of people more alike than not.

Unlike Mick Jagger, who affects an imperious air, or the strange mystic that is now Bob Dylan, Springsteen is the uber everyman. Dressed in jeans, a work shirt and boots, he could have been any one of a thousand or so guys in the audience Wednesday night.

But then again, not. From the first chords of the opener, "Radio Nowhere," there was a sense of Springsteen as an avatar, a leader who offers hope in dark times. Dipping heavily into material from his new release, "Magic," he offered a sturdy if unspectacular version of "Gypsy Biker" and the summery intoxication of "Girls in Their Summer Clothes."

Best, however, was "Livin' in the Future," and its dark lyrics, notably "my ship Liberty sailed away on a bloody horizon" even as he held out hope that "none of this has happened yet." Which was followed by the redemption of "The Promised Land," the band powerful, propulsive, one of those moments when you feel the music coursing through your veins. 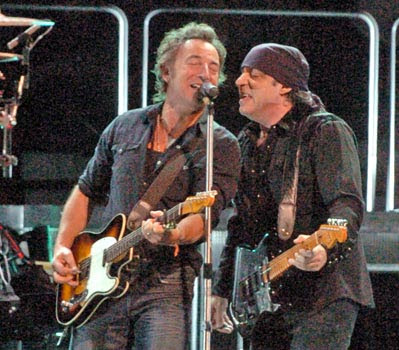 For better or worse, the E Street Band has become a quasi-orchestra, with very little room for soloing save a few licks here and there by sax player Clarence Clemons or guitarists Nils Lofgren. This approach, for the most part, works on songs such as "The Ties That Bind" and "She's the One."

But the evening's best moments were surprises, diverging from the E Street formula: A stirring, stark version of "Youngstown" that featured just Springsteen and his acoustic guitar. Better still was a shocker, the unexpected "Kitty's Back" from 1973's "The Wild, the Innocent and the E Street Shuffle," brilliantly understated with organist Danny Federici and pianist Roy Bittan given room to shine, the song percolating with almost a jazz-like feel until its rousing climax. Which was followed by the bombastic glory of "Born to Run" enough to sate both the diehards and casual fans.