Few pilgrims make Bakersfield, California their destination. But it was my first stop after I moved to Los Angeles in 2001. I was going to see Buck Owens, one of the greatest country music gods of the ‘60s now in retirement at the Crystal Palace.

The journey to Bakersfield was surreal. Two friends and I drove up the Pearblossom Highway through a desert landscape studded with Joshua trees, which looked like shaggy refugees from a Dr. Seuss book. We stopped in a high-desert town for the local delicacy, date milkshakes, and papusas made by immigrants from El Salvador. In the town’s junk shop, I bought a jazz record from the ‘30s that eerily paired a song called “Mohammed” with another called “Afghanistan”. We almost had to turn around when we reached Bakersfield because a hot rod convention had filled just about every motel room.

We arrived giddy with cultural vertigo, the perfect mood to see this fading country luminary. Owens’ music has always been the sound of exuberant dislocation. Born to North Texas sharecroppers in 1929, Owens and his family were blown west by the dustbowl. He began performing in Arizona before developing his trademark “Bakersfield sound” in the 1950s for audiences of Okies, Arkies, and other Southern migrants drawn to the city’s booming agriculture and petroleum industries. His music was seasoned with the heartache of someone who knows what it’s like to be away from home. “The Streets of Bakersfield” is one of the great portraits of a lost soul in the American landscape, while “Cryin’ Time” is the ultimate sad-sop weeper.

But most ear-catching was his kick-ass attitude that blasted out of the radio with the force of a Telecaster turned up to 11. Who else could pull off a line like, “Who’s gonna jump when you say, ‘Frog!’… Who’s gonna be your man?” Owens was a punk from an exploding cowtropolis, and his music bottled the energy of startled young urbanites whose families had been forced off the farm.

Owens always made his music on the margins, describing himself as being from the “Bob Wills and Little Richard school of music”. His rambunctious love for rock and roll was evident in his playing, but he was a faithful hillbilly traditionalist. In 1965, he even took out a curious ad in the Music City News declaring, “I shall sing no song that is not a country song.” But he always refused to migrate to the country capital, Nashville, even when he was hottest thing in country music. Yet, he also walked Southern California’s cultural faultlines. He recorded for Hollywood-based Capitol Records, but his one song about Tinseltown, “Act Naturally”, used the glamour of play up his own dejection: “I hope you come to see me in the movies / Then I know that you will plainly see / The biggest fool that ever hit the big time / And I’ll I gotta do is act naturally.”

Owens sadly lost his way in the ‘70s. Country fans tastes were changing, and he was derailed by the accidental death of his partner, Don Rich, whose searing harmony and smoking guitar was the bedrock of Owens’ band, the Buckaroos. He finished his days in the limelight as costar of the TV show Hee Haw, a diminished version of the young firecracker he’d once been.

Youngster Dwight Yoakam brought him briefly out of retirement in the late ‘80s, when their duet, “The Streets of Bakersfield”, topped the country charts. While Owens never left music after that, he mostly confined his playing to weekly appearances at the Bakersfield supper club he’d built in 1996, the Crystal Palace, until his death in 2006. 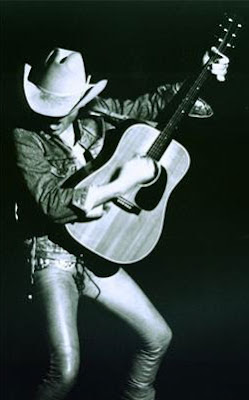 With his new tribute album, Dwight Yoakam has given us Owens back again, the young Owens whose music could set hay bales on fire. Yoakam was a fitting heir to Owens’ legacy. After migrating to Los Angeles following an unsuccessful stint in Nashville, Yoakam became a California rabble-rouser who sang country with rock and roll in his belly. The Kentucky native grafted himself on to the Bakersfield sound, shaking up the moribund Nashville establishment with a string of chart-toppers in the ‘80s and ‘90s.

Most of the songs on Dwight Sings Buck are faithful recreations of Owens’ originals. Owens’ songs wouldn’t tolerate stiff, note-for-note duplication, however. Yoakam manages to sound like he’s channeling Owens at his peak, while his band eerily summons the spirits of Don Rich and the rest of the Buckaroos with classics like “My Heart Skips a Beat”, “Cryin’ Time”, and “Above and Beyond”.

Yet Yoakam’s voice remains his own. And what a voice… it calls to mind the strangest paradoxes. He sings like a silky foghorn, soothing you to sleep at the same time he blasts you awake. He sings the way a chocolate-covered chili pepper might taste.

Yoakam is not afraid to open up Owens’ style when his spirit moves him. One of my favorite songs on the album, “Close Up the Honky Tonks”, combines the Bakersfield sound’s Telecaster and pedal steel with Latin percussion courtesy of former Motown session artist Bobby Hall.

Yoakam also deviates from Owen’s original on “Together Again”, the album’s final track. But where “Close Up the Honky Tonks” reinterprets the song, “Together Again” recomposes it. There is no stylistic departure—Owens could have sung the song the way Yoakam does, albeit with a pared-down band. But he sings an entirely new melody that gestures only faintly at the original. Owens legacy, Yoakam seems to be saying, is broader than the individual notes he sung, but a force that animates a much wider range of music.

That’s certainly what Owens is for me, though the night I saw Owens at his Crystal Palace was ultimately depressing. He was already quite sick, and barely played even while he was on stage. So here’s thanking Dwight Yoakam for reviving Buck Owens’ soul now that his body has been laid to rest. And all country fans—all those who are moved by America’s restless spirit, for that matter—should thank him, too.