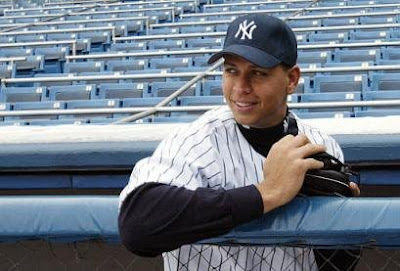 Imagine that Alex Rodriguez was running for president against Hillary Clinton and John McCain and Barack Obama, and then ask yourself this: How much would they have paid for the negative publicity he got over the last 18 days?

Ten million dollars? Twenty? Fifty million? Because for 18 days Rodriguez got hammered by everyone, everywhere. By our respected colleague Peter Gammons, who wondered forcefully if this sort of gauche hubris explained why Rodriguez hadn't yet played in the World Series. A-Rod got hammered by print columnists, by Mike and Mike, by Mike and the Mad Dog, by Michael Kay in New York and Mike Felger in Boston and the Mad Dog in Lansing and Softy in Seattle. A-Rod got hammered from sea to shining sea, after word of his decision to opt out of his record-setting contract leaked out in the middle of Game 4 of the World Series -- an act for which his agent Scott Boras first blamed on the Yankees; then blamed on a mistake; and then, probably cajoled by his All-Star client, finally blamed on himself, acknowledging what everybody in the game thought anyway.

A-Rod continued to get hammered last week, after word came out that Boras had demanded an initial offer of $350 million from the Yankees, and as the Players Association -- in a you-can't-make-this-up moment -- raised the question of whether there was collusion against a player who the Yankees had been prepared to offer the highest salary in the history of sports. If Rodriguez had taken their call.

We know now for certain that none of it was necessary, because in the end, Rodriguez is going to sign for precisely the contract offer he would've gotten from the Yankees had he sat down to negotiate with them during the World Series.

Well, not exactly the same offer. The Yankees have insisted on deducting, in their face-to-face negotiations with Rodriguez, about $21.3 million from the final amount -- the number of dollars in subsidy that the Yankees lost from the Texas Rangers when Rodriguez opted out of his current contract. Call it the Boras Tax, if you will.

Rodriguez is going to get the largest contract ever in sports, when the I's are dotted and the T's crossed. He'll survive. But Boras' reputation as a savvy negotiator will not. He somehow managed to badly overplay the perfect hand.

Boras represented the best player coming off one of the greatest seasons ever, in the midst of a Hall of Fame career, a 54-homer, 156-RBI monster season played out in sports' biggest market, for the richest team. Boras held four aces, in a sense, and yet his client's contract will be somewhat lighter, by about 7 or 8 percent, and his client's reputation -- which had just begun to heal, through his remarkable 2007 season -- was trashed.

Nobody should ever doubt that Boras was largely responsible for Rodriguez's $252 million contract in the winter of 2000-2001, a deal twice as large as any contract in professional sports, at that time. Boras pushed the buttons of Texas owner Tom Hicks and wound up with a landmark agreement.

But if Rodriguez finishes a new deal with the Yankees, of about $270 million, it will be a record-setting contract concluded in spite of his agent's missteps -- a deal built on Rodriguez's talent, his hard work, and his willingness to step forward and go around Boras, with humility in hand, to reach out to the Yankees.

If Rodriguez hadn't done that, there's every indication from rival executives that he would've been forced to go door to door, to the Angels or the Dodgers or the Mets or the Red Sox, to ask for a deal even within $100 million of what the Yankees offered. "That was the thing that was so strange about this," an agent mused on Wednesday evening. "There was nobody, in this market, who could pay close to what the Yankees could pay -- because of the market, and because of how important A-Rod is to them."

Alex Rodriguez has 173 homers and 513 RBIs in four seasons with the Yankees, and very soon he will win his second Most Valuable Player Award with them. He plays hard, prepares diligently, is a much better teammate than anyone realizes, and is in the midst of an incredible career. For all that, you would think that he would be embraced, and yet, he is not. In fact, several agents agreed on Wednesday night, that the damage done to Rodriguez's image over the last 18 days may take years to repair. "The only way he comes back from this," said one agent, "is if he plays a big role in the Yankees winning a World Series, or when he actually starts getting closer to Barry Bonds' record. Then the focus will be on his accomplishments."

But in the years ahead, A-Rod will have to live with the consequences of his own decisions and his own actions, and will continue to get booed. Meanwhile, if Boras draws the industry's standard rate of 5 percent, he will get about $14 million of Rodriguez's new contract.
Sometime in the last 18 days, you can bet that A-Rod -- as he came to grips with the reality that he had to accept a $21 million cut in his offer from the Yankees, and as he absorbed the kind of negative publicity that can jar politicians awake at night in a cold sweat -- has wondered what, exactly, he is paying for.

Rodriguez continued to get hammered in today's papers: George Vecsey writes that the Yankees should just say no. Hank Steinbrenner's stance caught A-Rod off guard, writes John Harper, and A-Rod was so mad that he considered suing Boras. A-Rod felt the wrath of fans, writes Mike Vaccaro.

Many in baseball are thrilled that Boras blew this negotiation, writes Bill Shaikin.
A-Rod has repudiated Boras, writes Murray Chass. A-Rod realized Boras had turned him into the most reviled figure in sports, writes Bob Klapisch. The Steinbrenner sons got the best of Boras, writes Mike Lupica. All sides fumbled this, writes Ken Davidoff.

• Wallace Matthews thinks this is a negotiating ploy. Things are moving along in the negotiations, Hank Steinbrenner tells Tyler Kepner.

• Was told Wednesday night that the base salary part of the contract talks were the easiest -- the Yankees laid out the parameters of their offer, and A-Rod agreed, in general, before the conversation turned to other parts of the contract.