Bonds bust: Our nightmare is over 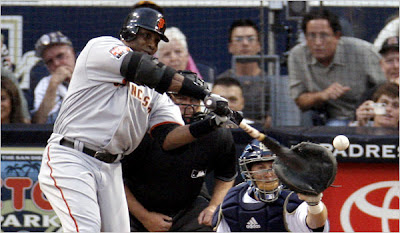 Barry Bonds's 755th home run was an opposite-field drive to left field in the second inning on August 4th.

This isn't a sad day for baseball. Hell, this is a joyful day, the first day of the rest of our lives without the creep who scummed up Henry Aaron, hijacked the Great American Home Run and held us hostage with his sleaze and smarm. I spent too many sad days and nights watching him in cathedrals like Wrigley Field and the waterfront park in San Francisco, loathing his every swing, hating what he was doing to my boyhood memories, knowing he was living a chemical lie.

On the third Thursday of November, 2007, the feds finally caught up with Barry Lamar Bonds. Not only do they think he cheated to break the all-time home run record, they say they have evidence that he lied to a grand jury about his use of steroids, human growth hormone, syringes and anabolic cream. If convicted on all five counts in a trial that should take place in the early stages of next baseball season, Bonds isn't going to Cooperstown or any honorable haven.

He's going to jail, maybe for a long time, which in turn should prompt baseball to forfeit his records either with an asterisk or a total whitewashing of his name. When someone cheats to shatter the milestone of a beloved, regal slugger, then lies when questioned about it under oath, we are within our right as a society to protect other eras by punishing and shaming Bonds as strongly as possible. Don't miss the point here and decry the performance-enhancing filth in sports the last two decades. We've had ample time to beat that dead syringe.

No, this is about justice in the world. This is about nabbing a crook at last. This is about Bonds being indicted on perjury and obstruction of justice charges shortly before Greg Anderson, the personal trainer who has refused to testify against Bonds, was suspiciously released from prison. No sleuthwork is needed to connect the dots. Said the indictment: ``During the criminal investigation, evidence was obtained including positive tests for the presence of anabolic steroids and other performance enhancing substances for Bonds and other athletes.'' Unless a San Francisco jury rewards the hometown hero with a favorable verdict, which would reflect the blind loyalty showed by Bay Area sheep during his stalking of Aaron's record, Barry is going down.

``Did you ever take any steroids that (Anderson) gave you?'' Bonds was asked by the grand jury on Page 3 of the indictment.

``Not that I know of,'' said Bonds, whose statements were underlined to indicate the alleged perjuries.

``In the weeks and months leading up to November 2000, were you taking steroids?'' he was asked on Page 4.

``Did he ever give you anything that he told you had to be taken with a needle or syringe? ... He never gave you anything like that?'' he was asked on Page 6.

``Were you obtaining human growth hormone from Mr. Anderson?'' he was asked on Page 6.

On and on it goes, questions followed by highlighted answers, until the grand jury finally concludes Bonds had delivered ``false statements'' and ``evasive and misleading testimony.'' Evidently, the feds are confident they have the goods to nail him on all counts, contrary to a belief in recent months that a four-year probe was going nowhere. All along, Bonds has lived his life as if rules don't apply to him. Seems the laws of land have placed him in the fight of his life. 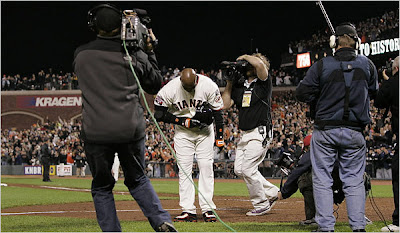 I was at AT&T Park on the depressing August night when Bonds hit No. 756. I was there when he said afterward in the interview room, defiance thick in his voice, ``This record is not tainted at all. At all. Period.'' If convicted, we will remember that evening not for history but disgrace, for a con man compounding a stack of lies with more lies. How awful that a generation of baseball fans might see the Home Run King toppled by juice and perjury after the Hit King, Pete Rose, was ruined by gambling and dirtball associations. I've had confrontations with each.

``What do you have against me?'' Rose asked when I covered him in Cincinnati, wondering about the strange outsiders hanging around the clubhouse.

``You're a Barry Bonds hater,'' Bonds told me during a media session at the Westin Hotel, on the off day before the 2003 All-Star Game at U.S. Cellular Field.

Maybe I just know crud when I see it.

The hope, of course, is that we can move away from the Bonds sludge and celebrate his would-be heir. Not so coincidentally, Alex Rodriguez was agreeing to a 10-year, $275 million contract with the Yankees as the Bonds news was breaking. What else would you expect from A-Rod, who upstaged Game 4 of the World Series with his opt-out announcement, but to try and improve his own soiled image amid the disrepute of Bonds? It was no surprise to see ESPN juxtapose the two stories all night long, framing the shamed potential jailbird against the reigning superstar who is 244 homers shy of Bonds' 762. There is language in Rodriguez's contract that allows him to share team revenue as he approaches Bonds' record -- I mean, Aaron's record of 755 homers -- in coming seasons. Baseball wants you to believe A-Rod is wearing a white hat and driving the garbage truck, ready to pick up Barry's trash. Obviously, it can't be that simple and tidy.

``The Yankees have never had a player since Babe Ruth that really had a 100 percent chance of setting the record,'' said Hank Steinbrenner, the new Boss. ``It's a historical achievement bonus more than it is an incentive bonus.''

All I have to say is, A-Rod better be A-OK -- as in clean. Because if he is merely the next Bonds in a vicious, never-ending cycle, baseball will have perpetuated its most dishonest era instead of learning from it.

They say the scars always heal, that the game inevitably overcomes scandals and crises. I can't be sure of that, not when baseball still has no reliable test for HGH and the dirty labs remain years ahead of the dope cops. But you'd like to think the Bonds indictment is at least a line of delineation for The Steroids Era, that the head of the monster has been chopped off and baseball can get around to cleansing itself and effectively policing the juicers.

By nightfall, everyone from Bud Selig to Donald Fehr to President Bush had weighed in, all calling it a sad moment. Time will tell, but I'd like to think we've finally found religion. Barry Lamar Bonds, scumbag, has been indicted.
Posted by jtf at 8:11 AM