Everybody’s Brother Celebrates the Resiliency of the Human Spirit

Billy Joe Shaver’s been thinking about making a spiritual album for a long time, but like everything in his life, he approaches spirituality on his own terms. “Somebody called this album ‘honky tonk Gospel,’” Shaver says chuckling. “I kinda like that.”

The last few years have been rough on Shaver. His mother, wife and son Eddy all died within a year’s time. Then he suffered a massive heart attack, but he recovered and was soon back on the road, his characteristic optimism intact. “When I started working on this album, I pulled out a lot of old songs and started changing ‘em. Most of ‘em are heavy – there’s some strong medicine here.”

Everybody’s Brother (in stores September 25th on Compadre Records/Music World Entertainment) is a celebration of life as much as it is a meditation on mortality. “There were times I thought I’d be happy to go,” Shaver confesses, “but you don’t go when you want to. You go when God wants you. I’ve always been lucky and I’m lucky to still be here. God gave me this gift [of songwriting] and I’ll keep polishing it as long as I can.”

The songs on Everybody’s Brother deal with love, loss, mortality and the hereafter, all viewed from Shaver’s unique perspective. “Rolling Stone” opens the album with a bang. The tune addresses Shaver’s recent Las Vegas Wedding when he cracked his vertebrae during a post-reception wrestling match with a friend. “Get Thee Behind Me Satan” includes John Anderson who trades off on lead vocals and adds his harmonies to the chorus on the bluesy rocker. It’s a confession and a celebration of salvation, with Shaver delivering a performance with a jubilant, unrestrained power. Next up is “No Earthly Good,” a duet with Kris Kristofferson of a Johnny Cash song from his Personal File album. The song is a gentle put down of spiritual people who refuse to take responsibility for the sad state of the world. “I wrote for Cash’s publishing house for a few years and he gave me that title, but I was so dumb, I didn’t jump on it,” Shaver recalls. “You Just Can’t Beat Jesus Christ” rides a stomping Waylon Jennings rhythm. It was cut with Johnny Cash, Willie Nelson’s nephew, Freddy Fletcher, on drums, Rougie Ray, who lays down some amazing harmonica licks, and a 15-year-old Eddy playing smoking guitar, at Jack Clement’s studio in the 70s. “It’s another first take. Jack’s famous for working fast. It was all done live and everything leaks, so you can’t overdub. John Carter remixed it carefully and it sounds like a million bucks.” Four love songs Shaver wrote for his wife Brenda over the years give the album its heart. “To Be Loved By A Woman,” “The Greatest Man Alive,” “I’ll Always Be Your Best Friend” and “Most Precious.” “I’ve been saving some of these songs for a long time,” Shaver says. “I went through them with John Carter and these seemed to hold together. They’re all about loving someone so much you want the best for them. ‘Most Precious’ is the name of a perfume my wife used to wear. It was so light you could hardly tell she had it on, but I could tell. She was most precious to me.” 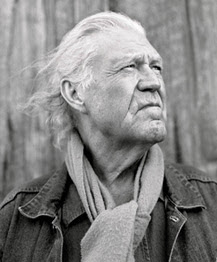 The most remarkable song on the album is the title track, a nine minute epic. Bill Miller adds pow wow drums, Native American cedar flute and Native vocals to the track for a soundscape that pays tribute to America’s oldest music. “It was my idea to mix cowboy and Indian music,” Shaver says. “I’m Blackfoot on my father’s side, and Bill’s a full blood Mohican. He did a wonderful job.” The song is a folk hymn praising the Lord and offering a prayer for our deliverance from the evils of war, poverty and hypocrisy. “The chorus is Lakota,” Shaver explains. “‘Hey Hanta Yo’ means ‘move aside’ – get out of the way if you ain’t gonna help. It was a hard song to write and the night before we recorded it, I was up all night writing. I believe I had a visitation from Johnny Cash. I believe some of the verses are from him. I ought to give him co-writing credit.” Shaver also reprises “When I Get My Wings,” the title track from his Capricorn album of 1976. John Carter Cash rearranged it for bluegrass mandolin and sanctified Hammond B3. “It’s a love song to the hereafter,” Shaver says. “John Carter had a whole different take on it and it’s doggone fine.”

Shaver will be back on the road to support Everybody’s Brother, but he’s already looking forward to his next album and promoting his autobiography Honky Tonk Hero (University of Texas Press, 2005) and The Wendell Baker Story, his latest acting effort. “Luke Wilson wrote and directed The Wendell Baker Story. I play a retired Reverend in a nursing home with Harry Dean Stanton and Kris Kristofferson. I’ve been playing Reverends in a lot of stuff, and I don’t know why.” It could be Shaver’s brutal honesty and openhearted generosity of spirit, which shines through on screen or off. The soulful quality of Everybody’s Brother shouldn’t surprise anyone who knows Shaver, a man who’s able to touch the hearts of listeners and win new fans and friends wherever he goes.

Billy Joe Shaver’s life is the stuff of legend, stranger than any fiction. Abandoned by his parents shortly after he was born in 1939, he was raised by his grandmother in Corsicana, Texas. A Hank Williams show he saw in the late ’40s changed his life for good. “I don’t remember how old I was, but I was too young to be sneaking out my bedroom window and walking down the railroad track at night. Homer and Jethro [a country comedy act featuring the super pickers Homer Haynes (guitar) and Jethro Burns (mandolin)] were playing on the loading dock behind a bread factory and I wanted to see them. I shimmied up a pole to hear better and Jethro said: ‘Listen to this next guy, he’s gonna be a big star.’ Hank came out and sang one song. Then he walked off stage cause nobody was listening, but he made eye contact with me and sang right to me. Even though I’d been singing and making up songs since I could talk, it inspired me. When I crawled back in the window later on, my grandma was waiting. She beat the hell out of me.”

Shaver got a Gene Autry guitar when he was 11, and started playing and hanging out in the nearby African-American settlement, soaking up the blues, boogie woogie piano and slide guitar sounds that filled the air. At 17, Shaver enlisted in the Navy, but he was soon back in Texas, writing songs and working in a lumber mill. An accident with a saw cost him parts of three fingers, but he kept writing and playing small clubs. “I decided to hitch to LA and become a songwriter,” Shaver recalls. “I was on Highway 10 most of the day and couldn’t get a ride, so I crossed the road and went the other way, to Nashville.

“People think I walked into town and got Waylon to do my songs.” Every track but one on Jennings’ 1973 album, Honky Tonk Heroes, was written by Shaver. “I’d actually been in town for years, writing songs for Bobby Bare’s publishing company before Waylon made that album.”

Kristofferson put up the money to produce Shaver’s first album, Old Five And Dimers Like Me, but it took the success of Waylon’s Honky Tonk Heroes before anyone would take a chance on Shaver. “That album laid in the can for a year. Right after Monument put it out, they went out of business. My timing was off,” Shaver says dryly.

Shaver’s songs became anthems of the Outlaw movement, but his personal life was a mess. “I was beset by drugs. When I looked in the mirror, I looked like I was dead. I finally gave my life over to Jesus Christ and, while I’m not a religious man, I am a spiritual man. He saved me.”

Everyone from Elvis to Dylan covered Shaver’s songs, but his own albums didn’t fare that well until the 90s, when he put together a band, simply called Shaver, with his son Eddy. Eddy had played in his father’s bands before, but when he switched to electric guitar, their heavy metal honky tonk attack established them as a smoking live act. The albums they cut together, Tramp on Your Street, Highway of Life, Victory, Electric Shaver and The Earth Rolls On are classics. They seemed unstoppable. Then, Eddy died of a drug overdose.

“I guess God has a plan for me,” Shaver says laughing slowly. “Jesus Christ took away the sting of death when he came to me and if you’re not afraid of dying, you can be happy all the days of your life.”
Posted by jtf at 11:44 AM