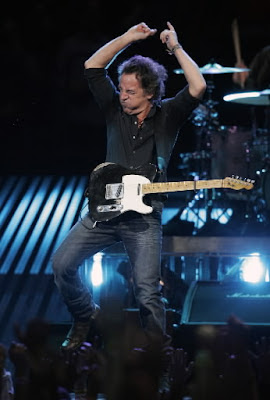 Is it too late in his career to start thinking about Bruce Springsteen as a great dancer?

Not dancer in the boogie-down sense, although he can still pull that off. I'm talking in the Martha Graham sense, as in someone who's mastered the evocation of mood and meaning through the use of his body.

At 58, Springsteen isn't throwing himself around like Baryshnikov, but the sold-out Times Union Center crowd saw a man who can fill an arena stage like few performers half his age. He planted his feet and declaimed the lyrics, sculpting the air in front of him and punctuating each line. He stalked the catwalk exhorting the crowd to lean in, raise their hands, sing along. As if they needed convincing.

The E Street Band's first Albany appearance in almost five years was looser and more wide-ranging than either the 1999 reunion tour or the shows that attended "The Rising." This one was pitched a little closer to Springsteen's July 2005 solo show behind "Devils and Dust," in which the artist pushed his songs in fascinating directions.

One of the tunes reworked in that show, "Reason to Believe," was the clear highlight here: With all hands on deck, this "Nebraska" track built from a Howlin' Wolf blues vamp to a roadhouse guitar workout worthy of early ZZ Top; Springsteen delivered the last verse through a fog of distortion, sounding like the world's oldest man.

The terrific new album "Magic" was given the showcase it deserves without overwhelming the set. The politically significant title track was full of coiled menace ("Every night we tell the people it's not really about magic," Springsteen said. "It's about tricks"), while "Gypsy Biker," "Last to Die" and "Long Walk Home" sounded fuller live.

The band reached back more than three decades for "4th of July, Asbury Park (Sandy)" and a light-fingered, deeply funky take on "The E Street Shuffle." "Darkness of the Edge of Town" yielded its title track as well as "Candy's Room" (a showcase for drummer Max Weinberg), "Badlands" and "The Promised Land."

The extended encore included "Dancing in the Dark," "Born to Run" and more, finally ending with a rousing "American Land" from the Seeger Sessions project.

The band (minus Springsteen's wife, Patti Scialfa) remain firmly in each other's pockets. If there was a standout, it was the interplay between Steven Van Zandt and Nils Lofgren, who balance out Springsteen's own blunt guitar with their own respective talents for raw power and delicacy.

Casey Seiler can be reached at 454-5619 or by email at cseiler@timesunion.com.

Length: 135 minutes, starting a little late -- almost an hour after the slated 7:30 start 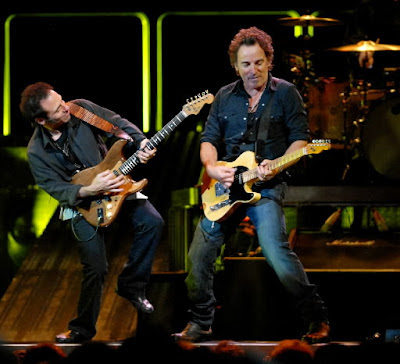