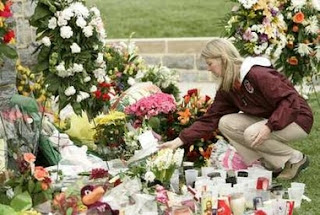 A Virginia Tech faculty member lays a flower at a memorial to the victims of the Virginia Tech shooting, on the campus in Blacksburg, Virginia April 19, 2007.

A non-citizen with a green card -- stay tuned, the parallels to Jamaican Colin Ferguson killing six and wounding 19 on the Long Island Railroad in 1993 go way beyond that -- killed 32 people at Virginia Tech University last week, finally growing so weary after two hours of unobstructed mayhem that he gave up waiting for police to intervene and killed himself.

Surprisingly -- but only because we keep assuming they're more susceptible to the weight of facts and evidence than the average house plant -- the victim disarmament movement was once again in full bray last week, splashing around in the gore of Virginia Tech and shrieking with glee at the prospect that this massacre may once again breathe life into their thoroughly discredited agenda.

In fact, it would be harder to dream up a tragedy better designed than Virginia Tech -- where gun-grabbers are disappointed the killer used only a couple of pocket pistols, instead of a big ugly "assault rifle" -- to demonstrate the folly of "gun control."

Last year, the Roanoke Times quoted Virginia Tech spokesman Larry Hincker saying he was happy to hear of the defeat of Virginia House Bill 1572 -- sponsored by Todd Gilbert -- which would have prohibited public universities from making "rules or regulations limiting or abridging the ability of a student who possesses a valid concealed handgun permit ... from lawfully carrying a concealed handgun."

"I'm sure the university community is appreciative of the General Assembly's actions because this will help parents, students, faculty and visitors feel safe on our campus," the Virginia Tech spokesman said, little more than a year ago.

One wonders if this cheerful idiot still holds that parents, students, faculty and visitors feel safer on the Virginia Tech campus, knowing they're barred from defending themselves against armed lunatics like Seung-Hui Cho?

Since Gilbert's bill failed, most universities in Virginia continue to require students and employees other than police to check their guns. In June 2006, Virginia Tech's governing board specifically approved a "violence prevention policy" that reaffirmed that school's ban.

I know what: Let's next "prevent more violence" in the Middle East by disarming Jews in Israel and trusting the Arabs to leave them alone!

"Had I been on campus today, and otherwise been entitled to carry firearms for protection and been deprived of that, I don't think words can describe how I would have felt, knowing I could have stopped something like this," Gilbert, the sponsor of that modest 2006 Virginia bill, told World Net Daily on the day of the shootings.

If that sounds familiar, it's because numerous witnesses to the Colin Ferguson massacre on the Long Island Railroad later testified that -- had they not been barred by law from carrying their own self-defense weapons -- they could easily have saved many lives by taking down the killer on one of the many occasions when he stopped to reload.

Similarly, Suzanna Gratia Hupp won election to the Texas Legislature after testifying that she could have stopped another mass murderer in Killeen, Texas, from reloading and subsequently shooting Mrs. Hupp's mother and father in the head if the law had allowed her to bring into the Luby's Cafeteria that day the loaded handgun which she had -- as required by law -- left outside in her truck.

We don't even have to get "theoretical" about this. As Jacob Sullum of Reason magazine pointed out on these pages last week, "Four years ago at Appalachian Law School in Grundy, Va., a man who had killed the dean, a professor and a student was subdued by two students who ran to their cars and grabbed their guns. In 1997 an assistant principal at a public high school in Pearl, Miss., likewise retrieved a handgun from his car and used it to apprehend a student who had killed three people" -- armed citizens in each case almost certainly sparing further lives.

"Hopefully, there will soon be an opportunity to examine which policies, if any, could have prevented this incident," mewed Josh Horwitz, executive director of the so-called Coalition to Stop Gun Violence, last week.

Needless to say, Mr. Horwitz then tipped his hand, adding, "In a nation plagued by gun violence and more than 30,000 gun deaths per year, a re-evaluation of our overly permissive attitude toward firearms is long overdue."

This is the rhetorical equivalent of blaming drunken driving deaths on "the easy availability of cars."

Actually, it's much stupider than that. There are now some 20,000 overlapping gun control laws in this country, each enacted by lawmakers in violation of their sacred oaths to protect and defend the Constitution, virtually all imposed since the 1920s, before which time this was such a peaceful country that Americans didn't even lock their doors.

In contrast, we now live in a country where an innocent American can be sent to prison for owning a broken rifle, providing the ATF can haul the thing off to its Virginia test range and cause it to slam-fire three rounds before it jams. Given that the ATF has unconstitutionally banned both the re-importation and new manufacture of BARs, supply and demand now dictate that a single one of these bulky and outdated militia weapons would cost me $10,000 -- once I passed the background check, and assuming the sheriff approves.

Yet these bitter-enders keep chirping about "the too easy availability of guns."

If the hoplophobes really wanted to "examine which policies, if any, could have prevented this incident," why not simply look at the anti-depressant connection?

Kip Kinkel of Springfield, Ore., one of the first of our recent wave of school shooters, had recently been taken off the psychoactive drug Ritalin when he decided to kill his parents before shooting up a school breakfast. Can you recall that happening before they started prescribing Ritalin to schoolchildren?

One of the Columbine school shooters was turned down when he tried to enlist in the Marines because he'd been on Luvox, another psychoactive "anti-depressant." And The Associated Press reported last week that Virginia Tech shooter Seung-Hui Cho "may have been taking medication for depression."

But we won't be looking at that pattern, will we? Instead, America's hoplophobe press will follow Mr. Horwitz's lead and concentrate on "where he got his guns" -- which makes about as much sense as investigating the latest Baghdad truck bombing by asking, "Where on earth did that suicidal militant get his Toyota?"

Why don't they explain to us, just this once, why these chemically warped fruitcakes never attack police stations or Army bases? Could it be because, even in their madness, they know the armed people there might shoot back?

We wouldn't want to similarly inoculate our schools, I suppose.


Vin Suprynowicz is assistant editorial page editor of the Review-Journal and author of the novel "The Black Arrow."
Posted by jtf at 9:53 PM