Book Review: "Jesus For the Non-Religious" by John Shelby Spong 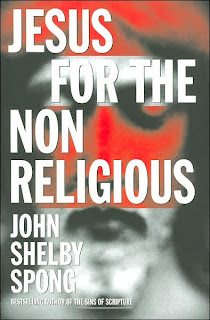 
What’s a religion good for, anyway?

That is the question retired Episcopal bishop John Shelby Spong never gets around to asking, let alone answering, in his new book, Jesus for the Non-Religious. His title suggests an answer, and he has tried to lob his book like a hand grenade into the institutions of Christendom. The idea is to explode two millennia of traditional belief on which these institutions rest, thereby making room for a new Christianity based on a conception of Jesus that is palatable to “a twenty-first century person.” What actually crawls out of the rubble is a Jesus for John Shelby Spong.

This Jesus would be unrecognizable to most Christians. The largest section of the book is an attack on “the supernatural forms of yesterday’s Christianity.” Spong executes this attack by means of a lengthy textual criticism of the Gospels, sprinkled with occasional undeveloped thoughts on the incompatibility of traditional belief with a modern worldview. (“The ability of anyone to walk on water exists in our world not in reality, but only in very bad golf jokes.”) Along the way, he jettisons the following claims, among others: that Mary was a virgin at the time of Jesus’s birth; that Jesus performed miracles; that Jesus atoned for the sins of mankind; that Jesus was resurrected; and that the resurrected Jesus ascended to Heaven.

Spong’s analysis is interesting as far as it goes, though his tendency to dismiss all disagreement as “hysterical” — his adjective of choice for traditional believers — is unbecoming, morally and intellectually. I offer here no evaluation of his textual criticism, as literary sleuthing is rarely dispositive. Instead, let’s assume for the sake of argument that his thesis is correct: Jesus performed no miracles, wrought no atonement, and rose from no tomb. When one is left with such a Christ, what does it mean to say — as Spong says of himself — that one is “a believing Christian”? What does one believe in? How could one persuade anyone else to share this belief?

Spong’s attraction to Jesus seems to be rooted largely in the ethics Jesus taught and lived. Jesus was nice to Samaritans. Jesus didn’t shun lepers. Jesus protected adulteresses from the stoning mobs. All to the good, as hysterical Christians would agree.

Disagreement is likely to begin where Spong’s Jesus starts preaching the Gospel according to Howard Dean. For instance, this Jesus would support the ordination of homosexual bishops and oppose the “authoritarian” institutions of the Christian churches. Why? Because “moral judgment is not life-giving; love that transcends the boundaries of judgment, as Jesus’ love did, is.” One can charitably assume that, had Spong written more carefully, he would not have implied that all moral judgments are to be forsworn. (His admonition not to judge rests on a judgment against those who are judgmental in ways he disapproves of.) But the principal message of Spong’s Jesus is clear enough: We must set aside unacceptably exclusionary traditions and moralities.

Whether this appeals to you as an ethics will depend on whether you share Spong’s opinions about which exclusions are unacceptable. But even if you do, Spong does not want you to think of Jesus as a moral exemplar merely. Probably he wishes to preserve some necessary connection between Christ and Christianity, and recognizes that the soundness of an ethical system does not depend on who taught it, or whether anyone taught it at all. (We could pattern a very fine Christian ethics on the “life” of Alyosha Karamazov.) How, then, does Jesus transcend the ethical? “As a Christian,” Spong explains, “I live inside a faith system which, at its core, asserts that in the life of this Jesus, that which we call God has been met, encountered and engaged.”

A FAREWELL TO THEISM

“That which we call God,” eh? And what might that be? Spong starts by telling us what it isn’t. The “theistic definition of God” is dead, he says. What he means is that he does not believe — and does not think anyone else should believe — in “a being, supernatural in power, dwelling outside this world and able to invade the world in miraculous ways to bless, to punish, to accomplish the divine will, to answer prayers and to come to the aid of frail, powerless human beings.” Our goal should be to “separate God understood theistically from the experience of God that we claim for Jesus.”

Unfortunately, Spong never explains what his nontheistic God is. His book abounds in passages such as this: “There is something about this Jesus that erases tribal boundaries, that calls people to step beyond security systems and that flows into a new humanity unbounded by the walls of protectionism. That is one huge dimension of what it means to say that God was experienced as present in this man Jesus.” One reads on in the hope that Spong will come around to the other dimension — to whatever it is about God that cannot be reduced to ethics. (For if the word “God” denotes nothing but the totality of sound ethical propositions, it is simply a metaphor for what could be discussed more clearly without it.) One’s hope is finally disappointed in the last chapter, when Spong admits to having no idea what God is: “I cannot tell anyone who or what God is. . . . The reality of God can never be defined. It can only be experienced, and we need always to recognize that even that experience may be nothing more than an illusion.”

The blindness of this epistemological alley is all too apparent when Spong uses “the language of human analogy” to describe his experience of God. What he actually describes is his feelings. “I experience life to be more than I can embrace.” “I experience love as something beyond me.” “I experience being as something in which I participate, but my being does not come close to exhausting the content of Being itself.” This is all fascinating as one man’s account of his personal psychology. But there is no reason to suppose that what John Shelby Spong feels tells us anything other than what it feels like to be John Shelby Spong.

Even if we could somehow know that the nontheistic God existed, its obscurity would vitiate Spong’s conception of Christian ethics. Consider again my original question: What is a religion good for? One answer is that it goes on where Spong stops. It offers an account of the higher reality. It is not just an aggregation of imperatives, but a group of answers to such questions as: Why does something exist instead of nothing? Is there a supreme being? If so, what is his nature, and what does he expect of me? Will I survive my death? What must I do to ensure that my life after death is agreeable?

A religion’s answers to these questions are perfectly intelligible, even if its success in justifying them is open to debate. This intelligibility in turn provides a secure foundation for the religion’s ethics. If you believe (1) that you owe obedience to God and (2) that God has commanded you not to murder, it is a simple deductive step to the conclusion (3) that you ought not murder. I am not saying that an ethics must make reference to claims about God. But Spong thinks Jesus’s ethics is grounded in the divinity that was present in Jesus. By insisting that this divinity is unknown and unknowable, he destroys the possibility of such grounding.

So the nontheistic God is mute. It can say nothing about how we should live. Worse, it can say nothing about how we should die. That too is something a religion — or a theistic one, at least — is good for. Spong seems to recognize this. Theism arose, he says, as an adaptive response to the irreducible anxiety of self-consciousness, and in particular the fear of death. Whether or not he has his evolutionary biology right, it is surely true that theism, coupled with a belief in personal immortality, helps ease the way into that good night.

John Shelby Spong is an old man. In a passage both moving and sincere, he writes of his own approaching end and his hope to write another book:

I have one further literary task that I hope to complete in my already more than ‘three score and ten years.’ . . . I want to take the idea of a nontheistic but eminently real God met in the human Jesus and from that vantage point address the subject of death and dying, as well as what the church has tried to say throughout the ages on the subject of eternal life. . . . If my idea of God and my vision of a redefined Jesus cannot speak to the human anxiety of death, then I do not believe that I have found either the new beginning for the Jesus story that I seek or one that will survive.

It is hard to see how the new story can survive when the God at its center is nothing but an overwrought sentimentality plummeting down an abyss. If that is all we have left, Spong can keep his Christianity. There would be more dignity and courage — to say nothing of honesty — in facing life’s terrible question marks with a mind that does not flinch.
Posted by jtf at 1:46 PM

In the name of Allah, the Beneficent, the Merciful. Say: He, Allah, is One Allah is He on Whom all depend. He begets not, nor is He begotten. And none is like Him.