George Vecsey: All Those Who Wanted A-Rod Gone, Raise Your Hand 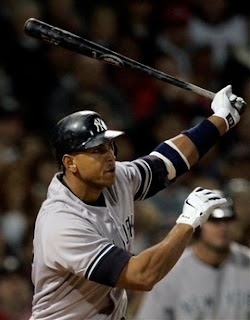 The moral to the story is, don’t make rash judgments. It was only six months ago that Joe Torre batted Alex Rodriguez in the embarrassing eighth spot in the lineup during the final game in Detroit.

Some fans and sportswriters (let us not name names) were screaming that maybe it was time for Torre to go, or Rodriguez, or even both, since obviously something wasn’t working out with this expensive talent.

Now Rodriguez is on a tear that could match any one season that Ruth, Gehrig, DiMaggio, Mantle, Maris or Jackson ever had. Maybe he will even do Major League Baseball a huge favor by taking attention away from Barry Bonds.

A-Rod did not hit anything out yesterday as the Red Sox beat the Yankees, 7-5 , in sun-drenched Fenway Park, but he did drive in his 31st run and had a single and double, after his two home runs Friday gave him 12 for the season.

“I may have seen a player this hot,” Torre said earlier, “but never with this ability.”

Rodriguez is not some fluke, some Shane Spencer or Hurricane Hazle just arrived from the bushes, having a hot week. This is a great player, living up to his potential

At the same time, a suddenly relaxed A-Rod is adding some joy and excitement to accompany Balco Barry’s inexorable drive toward Hank Aaron’s career-record 755 homers. To his credit, Bonds is not dragging out his chase. Three months short of 43 years old, he whacked his fifth home run yesterday, giving him 739 for his career.

But what if A-Rod gets there first? After all, he does have 476 home runs, heading toward 500 by July 4, doing what people have expected of him. When A-Rod came up with Seattle in 1994, just turned 18, his teammate, Ken Griffey Jr., was the viable (and popular) choice to catch Aaron. 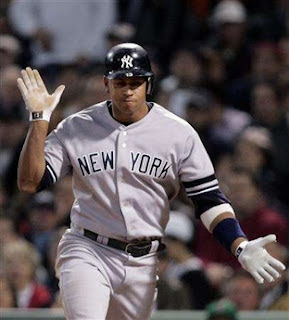 However, injuries slowed down Junior. And something or other got into Bonds in athletic middle age, turning him into one of the great home run sluggers, not merely the superb all-around player he had been. Now here comes A-Rod, having already won two games with home runs after his abject failure last October, when he had one weak hit in 14 at-bats.

When reporters, none too subtly, suggested that Rodriguez was permanently damaged after Torre had batted him eighth, Brian Cashman, the owlish-looking general manager, stood in the silent corridor outside the stunned Yankees clubhouse in Detroit and insisted that Rodriguez was going nowhere, and if Cashman had anything to say about it, neither was Torre.

Nothing much changed with the Yankees. The portion of the faithful that wants Don Mattingly to manage as soon as possible is currently upset at Torre for using Mariano Rivera in the eighth inning Friday night as the Red Sox caught the Yankees, 7-6. But if Torre can be blamed for managing decisions that go wrong, does he get any credit for the spurt by A-Rod?

Asked yesterday if he thought he had lost Rodriguez that grim day in Detroit, Torre said, “I never thought it would have an effect on him adversely.”

Torre added that he and Rodriguez discussed the move when the Yankees’ flight landed in New York last October, and that they hugged before parting. The bluster to move A-Rod now seems like knee-jerk punditry, if not temporary insanity. Whatever Rodriguez did for himself in the off-season — and it was clearly more than his normally obsessive physical workout — he has come back with a new nuts-to-everybody attitude, not that he would say so.

Did Torre ever give Rodriguez any advice on how to loosen up? “I said to him, ‘Take what comes,’ ” Torre said. “He gets in his own way sometimes. But I sensed in spring training that he was having more fun.

“His approach is so much softer,” Torre said. “A year ago, you didn’t see the fluidity.”

During his career, Rodriguez seems to have tried too hard to please everybody, stemming from a need to be loved. In February, he showed up for camp and started blabbing about his cooled-off friendship with Derek Jeter, and a lot of people wondered when A-Rod would give up this touchy-feely stuff. Still, that admission may have been cathartic, helping him adopt some personal mantra, some psychological stance, that put him on a tear.

Does Torre have any theory why Rodriguez is so comfortable this year?

“No — and don’t ask him,” Torre commanded with a smile.

Naturally, we do ask him, on the hour. But he’s not giving much away. And that’s a good sign.

The Red Sox fans roasted A-Rod on his return to Fenway, as they have since he joined the Yanks in 2004. Of course, if Rodriguez should take advantage of the opening in his contract — his price probably went up a few more million this weekend — the Sox’ fans would instantly adore him for his good taste in moving to Fenway.

Yankees fans, note that until Rodriguez has a really good October, none of this matters. He left Seattle for Texas, saying it really wasn’t about the money, but of course it was. He came to Yankee Stadium for a championship. If he had left after last October, he would have been a failure, and he knew it.

What if this dedicated athlete catches Ruth and Maris, then chases down Sosa and McGwire? What if this quite decent human, with no trace of scandal to his name, roars right past Bonds’s six-year-old record of 73 home runs in a season? He couldn’t pick a better year for it.