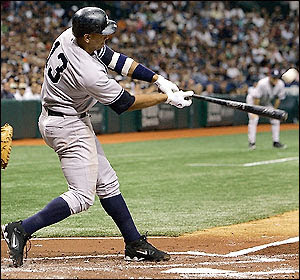 Alex Rodriguez hits a two-run homer in the ninth inning of last night's loss to push his season total to 14 home runs in 18 games.

ST. PETERSBURG, Fla. -- As Alex Rodriguez continues to put up numbers that look as if they belong in a video game, the Yankees' pitchers continue to falter.

The Yankees dropped their fourth straight game last night, losing to the Devil Rays, 10-8, despite Rodriguez's two home runs. At this rate, the only way A-Rod's performance will be as memorable as it should be is if he copies Babe Ruth's early years and begins pitching as well.

Rodriguez has 14 home runs in 18 games, reaching that figure faster than any other player in major-league history. With six games remaining in the month, he tied the Cardinals' Albert Pujols for the major-league record for home runs in April and broke the American League record of 13 held by Ken Griffey Jr. A-Rod's 34 RBIs match the total of the two AL players tied for second, as Jason Giambi and David Ortiz each has 17. But not even those superlatives have been able to prevent the Yankees from falling to 8-10.

"He's keeping us in the games," manager Joe Torre said. "He gives you a chance to catch up all the time ... unfortunately."

The "unfortunately" aspect is that the Yankees are constantly in catch-up mode. That's because the Yankees' starting pitchers are averaging a major league-low 4.87 innings per game, according to Stats, Inc. Kei Igawa did not even manage that last night. He gave up seven runs and was yanked after 4 1/3 innings.

Rodriguez's historic month is the only reason the Yankees are even in a position to compete. He went 4-for-5 with three RBIs and four runs scored last night. His batting average is up to .400, he has hit safely in all 18 games and his slugging percentage is 1.053. The list of records he is setting or matching is lengthy.

But can Rodriguez enjoy what he is doing? "Probably not as much as I should," he said, "but I will someday."

The sheer joy Rodriguez exhibited immediately after his pair of walk-off home runs earlier this month at Yankee Stadium is gone. Knocking in nearly two runs a game, a pace that he cannot realistically expect to maintain, must feel exhausting when it can't prevent four consecutive close losses.

"You've just got to grind through," he said. "We need a win in the worst way ... The key is not to get discouraged."

Even Torre admitted that can be tricky when the team is racking up runs but not seeing any rewards. The Yankees scored in each inning from the second through the sixth last night yet never took the lead beyond 1-0. They knocked around Devil Rays starter Casey Fossum (2-1) for six earned runs in 5 2/3 innings and he still got the win.

Igawa (1-1) did even worse than Fossum as his ERA rose to 7.84. If the Yankees were not desperate for starters, they might send him to the minor leagues. They can hardly afford to do that, given that Chien-Ming Wang is making his season debut tonight and Mike Mussina and Carl Pavano still are on the disabled list.

"He had no command," Torre said. "He was missing his spots by a long way. You're certainly not going to have success when you don't throw enough strikes and you don't spot the ball."

Rocco Baldelli's three-run homer in the second inning gave the Devil Rays the lead for good at 4-1, but the Yankees closed to within 7-6 in the sixth inning. Colter Bean pitched a scoreless inning in relief of Igawa, and Mike Myers and Brian Bruney got the final two outs in the sixth. But Bruney lost his command in the seventh, walking Akinori Iwamura and giving up a double to Elijah Dukes. After he fell behind Josh Paul 2-and-0, Torre replaced him with Luis Vizcaino, who walked Paul and allowed a three-run double to B.J. Upton, who had lined a home run off the leftfield foul pole in the fourth inning.

"It just can't happen every night like it is," Johnny Damon said of the short starts. "The bullpen's being used to death because of it."