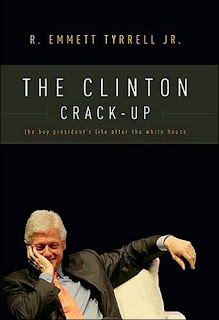 Conservative columnist and author R. Emmett Tyrrell has not really spent half his career reporting scandals about Bill and Hillary Clinton. It just seems that way. The American Spectator, the conservative monthly magazine he founded in 1967, broke some of the earliest stories about "Troopergate," "Travelgate," and "Filegate" in the early 1990s. And two of his books, 1997's Boy Clinton and 2003's Madam Hillary, were unflattering but best-selling biographies of his favorite Democrat power couple. Now the irrepressibly troublemaking Tyrrell has updated the Bill Clinton saga with The Clinton Crack-Up: The Boy President's Life After the White House. I talked to him Thursday, April 18, by telephone from his offices in Washington.

Q: Why can't you just leave the poor Clintons alone?
A: Because I read the newspapers! (laughs) And they're in the newspapers -- often the headlines -- every day!

Q: What's a quick synopsis of your book?
A: The book takes up from Clinton's last hours in the White House and is the only book to chronicle his years of retirement, as he raises vast amounts of money for himself, recaptures the Democrat Party, and paves the way for his wife's coronation.

Q: Would you characterize what he's doing as work or play?
A: I characterize it as "obsession," (laughs), which is to say his life. His life, as I say in the book, has been one long itinerary.

Q: Is he still the same old Bill?
A: If that's the way you're going to phrase the question, let me answer it by saying, emphasis on "old." He's really aged. I crashed his birthday party in Toronto and saw for myself what my sources had told me during the two-and-a-half years I spent writing the book -- that Clinton had aged astoundingly. He's not in particularly good health. Why that hasn't made it into the new stories about him, I don't know.

Q: Why did you write this book?
A: I’ve been fascinated with the 1960s generation, and the 1960s generation is now facing its probably great political struggle in ’08. There’s the conservative side, which I have been on all these years, and there’s the left-wing side, which the Clintons and Jean-Francois Kerry and Howard Dean and Al Gore have been on. I’ve followed them from the beginning and I’m convinced that whoever gets the Democrat nomination in ’08 will be giving the left-wing of that generation its last opportunity to lay claim to the identity of the entire generation.

Q: What has Bill Clinton been doing since he left the White House and why is it different or worse than what previous ex-presidents did?
A: Well, just in dollars and cents. I start the book by comparing the retirement of Harry Truman with the retirement of Bill Clinton. The reason you compare the two is that, a) they're both Democrats, but b), they both left office with a very low approval rating. Clinton's went through the floorboards within hours of his leaving the White House because of Pardongate, the trashing of the White House and the pilfering of the White House. But Harry Truman absolutely refused, as he put it, to "commercialize the presidency." So he lived quietly -- and I might add in dignity -- reading history and writing at his retirement home in Missouri. Clinton went out and commercialized the presidency. He raised over $43 million in the first four years with, let's face it, pretty vacuous speeches.

Q: You always hear that "Clinton is a great speaker." But I've never heard him say anything great.
A: Take a look at the quote that I lift in my prologue from Toronto -- a completely meaningless if not chaotic statement. That night in Toronto the Canadian audience contributed $24 million to the Clinton charity. I quoted from the speech. It was inane. His speeches are inane. He is in retirement a reckless, mercenary and unhappy man.

Q: Have the media done a proper job of covering ex-president Clinton?
A: In the book, I coin a phrase “the episodic apologists.” They dominate the media. They have gone through repeated episodes in the Clinton life of holding great hope for his arrival; being thrown into great indignation -– personal indignation -– at the scandal; and then hope renewed in a matter of months. You never saw it any more dramatically than after Pardongate. They had such hopes for him in retirement. And within hours he had committed the greatest pardon scandal in American political history.

Read Pardongate in the book, where I quote Democratic leaders and the New York Times and the New York Observer abominating the Clintons and, in the case of the Observer, calling on Hillary to resign from the Senate. And within a matter of months, The Washington Post, which was just as critical, is booming her as the next president of the United States.

Q: What new and interesting will aficionados of Bill Clinton’s personal life learn from your book?
A: They’ll learn that his retirement has been a period of emotional turmoil and rejection, first by the American people and his wife, who sent him off traveling the world to raise money on his speaking tours. You learn interesting things like the Secret Service has no respect for him, and in fact served as my sources in numerous occasions. You’ll learn that after telling journalists it was a great mistake for him to give international fugitive Marc Rich a pardon, he actually months later in Switzerland visited with Marc Rich. You’ll learn that in the spring of ’05 he had his political people approach the political advisers of Gov. Schwarzenegger with the proposal that if Schwarzenegger will support Clinton in eliminating the ban against a president running for a third term, his people would support Schwarzenegger in overthrowing the constitutional ban against foreign-born presidential candidates.

There’s a lot more you will learn. The beauty of being an independent critic of the Clintons, as I have been, is that I can actually report that much of the press knows but has never deigned to report to the American people.

Q: Is the stuff in your book or is it waiting for future books?
A: Bill Clinton is an adolescent -- a perpetual adolescent. Taking all the pathologies of a bad boy and then bringing those pathologies of a bad boy into the presidency leads to some very dangerous consequences. One was his neglect of terrorism for eight years. Two was the technology transfers he allowed to the Red Chinese. And I guess three was defining deviancy down. I don't know what his greatest danger is to the country, but those are three.

Q: You obviously have fundamental political differences with the Clintons …
A: I don’t know! Clinton claims to be a moderate!

Q: How can we trust what you tell us about him?
A: Well, look at what I’ve actually said about him and see if it measures up. There’s never been any revelation I’ve made about Bill Clinton that has ever been found to be wrong. And make sure, that when someone tells you there is, you make sure it was a revelation of mine. The Clintons are inveterate liars and inveterate campaigners, and they’ll go out there and campaign and say that I’ve said shocking things about Bill Clinton. In his book (former Democratic National Committee Chairman) Terry McAuliffe claims that The American Spectator cooked up the nonsense that Clinton had “ordered the murder of political opponents.” He actually said in the book that that was one of our revelations. There is no truth to that whatsoever. So when somebody tells you that one of my revelations wasn’t true, make sure it was one of my revelations and not one of their pipe dreams.

Q: What good or nice things will historians say about Mr. Clinton’s eight years in office?
A: ... Historians are now saying that he achieved very little. I cite James Patterson, an eminent historian writing in the Oxford series of American history. He said that Clinton achieved very little. I suppose that’s what they’ll end up saying -– that’s the good thing: he achieved so little.

Q: The number of pardons and commutations -- was the number normal and was the nature of the crimes that were absolved typical?
A: The number was rather high but not catastrophically high. The crimes were very serious crimes -- a lot of drug dealing, money-laundering, violent crime. But what made them reprehensible was that they rarely lived up to the minimum of standards of a criminal who had spent some time in prison, had sought to make restitution, and had apologized. The Marc Rich case is a perfect example of it. In some cases, some of them never even sought pardons. In the case of Marc Rich, he had never done any time, he had never cooperated with authorities, and he had never apologized or attempted restitution.

When he appears on stage with her, the attention shifts to him. The Clintons are constantly living in fear that there will be a bimbo eruption at any moment, because of the reckless way he's lived his years of retirement. Finally, the record is clear: When he campaigns for people, they almost always lose. In '04 he campaigned for something like 14 candidates -- 12 of them lost. It's in the book. So there's an awful lot of myth about what a great campaigner he is. He's great for Bill Clinton but he's rarely been great for anyone he's campaigned for.

Q: What does it say about this country that so many people -- including so many rich and famous people -- think Bill Clinton was a great and wonderful president?

A: Well, it says, as Will Rogers would have said -- of himself -- "A great many Americans only know what they read in the newspapers."

Bill Steigerwald is the Pittsburgh Tribune-Review's associate editor. Call him at (412) 320-7983. E-mail him at: bsteigerwald@tribweb.com.
Posted by jtf at 6:59 AM