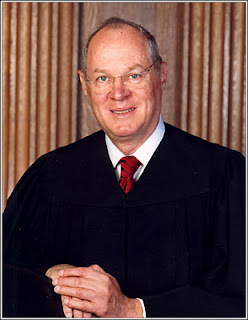 Reading Justice Anthony Kennedy's opinion in the partial birth abortion decision, just handed down, can be tough going even for a recovering lawyer like me. While he came out on the right side, i.e., banning the horrific practice, he justified his majority opinion through a close reading of and maneuvering through the labyrinth of the jurisprudence established in Roe v. Wade and Doe v. Bolton.

Contrast Kennedy's majority opinion with the short, concise concurring opinion of Justice Clarence Thomas (Justice Scalia concurring). While joining the Supreme Court's opinion "because it accurately applies current jurisprudence," Thomas hastens "to reiterate my view that the Court's abortion jurisprudence [citations omitted] has no basis in the Constitution." Period. End of story. Unfortunately, Chief Justice Roberts and Justice Alito were no-shows on this concurring opinion.

Notwithstanding that Justice Kennedy's opinion remained firmly grounded in the deformities of Roe and its progeny, the man deserves credit for an excruciating, factual, and grueling statement of the underlying facts of the case, specifically the horror which is abortion and partial birth abortion. He does not mince words.Kennedy cites a 1992 presentation by a Dr. Martin Haskell describing the method of "intact D&E" ("dilation and evacuation"):

The surgeon then forces the scissors into the base of the skull or into the foramen magnum. Having safely entered the skull, he spreads the scissors to enlarge the opening.

The surgeon removes the scissors and introduces a suction catheter into this hole and evacuates the skull contents.

After quoting this clinical description, Justice Kennedy goes on to relate the eyewitness testimony of a nurse who witnessed the same method performed on a 26-and-a-half-week fetus:

The baby's little fingers were clasping and unclasping, and his little feet were kicking. Then the doctor stuck the scissors in the back of his head, and the baby's arms jerked out, like a startle reaction, like a flinch, like a baby does when he thinks he is going to fall.

Kennedy notes that Dr. Haskell's approach is not the only method of "killing" (Kennedy's word) the fetus once its head lodges in the cervix. The procedures have evolved. He recites the gruesome litany of alternative ways of accomplishing the same end. Again, relying on Haskell, Kennedy says:

Another doctor, for example, squeezes the skull after it has been pierced "so that enough brain tissue exudes to allow the head to pass through." [citations omitted] Still other physicians reach into the cervix with their forceps and crush the fetus' skull. [citation omitted] Others continue to pull the fetus out of the woman until it disarticulates at the neck, in effect decapitating it. These doctors then grasp the head with forceps, crush it, and remove it. [citations omitted]

Kennedy provides much more detail, but I will spare you, gentle reader, from the gory details. You get the idea.

Previously, on this website, I have written on the way language is distorted to obscure the reality of partial birth abortion. Such obfuscation permeates all of federal jurisprudence relative to the matter of abortion. Generally.

Justice Kennedy defers to those precedents more than I would wish. Nevertheless, in this, his latest opinion, he is scrupulous in setting out the complete record documenting the existential realities of partial birth abortion. It remains to be seen if he will conform his jurisprudence to real life. But for now, at least, Justice Kennedy deserves our praise for his landmark decision and his unflinching description of what is at stake.

This decision will not make a significant dent in reducing the 1.3 million abortions performed each year in the United States, 85 to 90 percent of which occur in the first trimester of pregnancy. But drawing a line between abortion and something very close to infanticide, at almost the very moment of birth, is no small thing. The forces promoting unlimited abortion, on demand, for all nine months of pregnancy, will have to content themselves with that dark achievement for the time being.