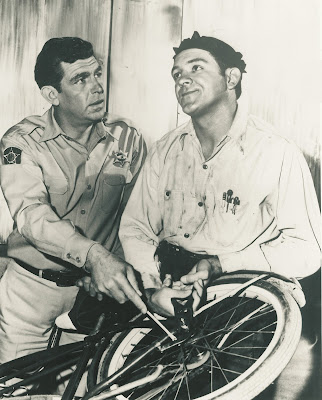 Lindsey, who later was a regular on the long-running country music comedy show "Hee Haw," died at a healthcare center in Nashville after a brief illness, said his manager and booking agent, Carrie Moore-Reed.

"George Lindsey was my friend," Andy Griffith said in a statement. "I had great respect for his talent and his human spirit."

Noting that he had his last conversation with Lindsey a few days ago, Griffith said: "I am happy to say that as we found ourselves in our 80s, we were not afraid to say, 'I love you.' That was the last thing George and I had to say to each other. 'I love you.' "

"The Andy Griffith Show," the classic 1960s situation comedy starring Griffith as the kindly sheriff of Mayberry, N.C., was in its fourth season in 1964 when Lindsey first appeared as the cousin of naive gas station attendant Gomer Pyle, played by Jim Nabors.

Lindsey's character became more prominent after Nabors left the show to star in the spin-off series "Gomer Pyle, U.S.M.C." in 1964.

As Goober, Lindsey wore a brown felt beanie with turned-up scalloped edges and had a tire gauge, pens and pencils stuffed into the pocket of his work shirt and a rag hanging out of the back pocket of his high-wasted pants.

"I had a lot of trouble with that part," he said in a 2005 interview with Alabama's Montgomery Advertiser newspaper. "I'd been playing a lot of heavy character roles. I'd done them on 'Alfred Hitchcock,' and 'Twilight Zone' and some others, and at first I found myself just doing an impersonation of Jim Nabors doing Gomer. I finally said, 'Look, tell me about this guy and who he is.' "

Lindsey often recalled that Griffith told him, "Goober's the kind of guy that would go into a restaurant and say, 'This is great salt.' "

"Andy Griffith turned out to be the greatest teacher I've ever had," Lindsey, an Alabama native, told The Times in 1968. "He kept tellin' me to play myself, to let it happen to me, instead of trying to be funny."

Over the years, fans of the show often would ask Lindsey to repeat a line he said during his first appearance on the series: a scene in Sheriff Andy Taylor's office in which Gomer asks Goober to do his "take-off on Cary Grant" for Andy.

"Couldn't you just swear Cary Grant was right here in this room?" an impressed Gomer says.

One of Lindsey's favorite episodes was the one in which, as a practical joke, young Ron Howard's Opie and a friend hide a miniature walkie-talkie under the collar of the stray dog Goober has adopted.

"Goober thought he had a talking dog," Lindsey said in a 1985 Associated Press interview. "It revealed Goober's childlike qualities; it made you laugh and cry."

Lindsey believed "The Andy Griffith Show," which earned Don Knotts five Emmy Awards as Deputy Barney Fife, was popular because "it was honest and simple."

"At that time, we were the best acting ensemble on TV," he said. "The scripts were terrific."

After Griffith left the high-rated CBS series in 1968, Lindsey continued to play Goober on the sequel series, "Mayberry R.F.D.," starring Ken Berry. It was canceled in 1971.

An only child in a poor family, he was born in Fairfield, Ala., on Dec. 17, 1928, and grew up in Jasper, Ala. He majored in biological science and physical education at what is now the University of North Alabama.

After graduating in 1952, he spent four years in the Air Force and another year as a history teacher and head basketball coach at Hazel Green High School in Alabama before moving to New York City, where he studied acting on the GI Bill at the American Theatre Wing.

One of his first jobs on TV was as one of the liars on the quiz panel show "To Tell the Truth." He did a stand-up comedy act to make ends meet and later played opposite Ray Bolger in the 1962 Broadway musical comedy "All American."

After landing in Hollywood that same year, Lindsey actually auditioned for the role of Gomer Pyle — and, he later said, was told he had the part — before it went to Nabors, a fellow Alabama native.

Lindsey's later credits included providing voices for characters in the Disney animated features "The Aristocats," "The Rescuers" and "Robin Hood." He also had a long run on the syndicated "Hee Haw."

"I really don't do Goober on 'Hee Haw.' I do George Lindsey," he told the Associated Press in 1982. "Maybe I don't know where George Lindsey stops and Goober begins. If you're in a series, as I was for seven and a half years, you draw on every personal experience for that character."

Although he once resented being typecast as Goober, Lindsey learned to embrace the role that brought him fame and provided the title for the 1995 book "Goober in a Nutshell," which he wrote with Ken Beck and Jim Clark.

As Lindsey said in the 1985 AP interview, "Goober is Everyman. Everyone finds something to like about ol' Goober."

Lindsey, who was divorced, is survived by his son, George Lindsey Jr.; his daughter, Camden Jo Lindsey Gardner; two grandsons; and his longtime companion, Anne Wilson.