Excruciating Beginning to Trial of 9/11 Plotters 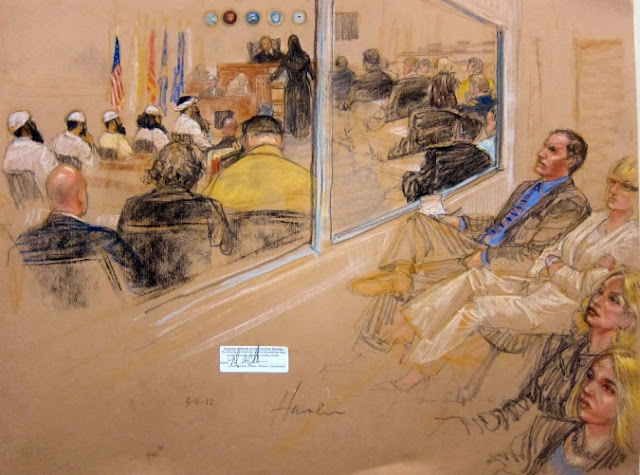 It was supposed to be a routine arraignment — a reading of the charges and entering of pleas by the defendants.

But the hearing before the military commission charged with trying the 5 major 9/11 plotters for crimes ranging from nearly 3,000 counts of murder to terrorism quickly bogged down and became a circus. A legal proceeding that was expected to last about 2 hours became a 13 hour marathon when defense attorneys used a variety of delaying tactics that bordered on the surreal at times, while the defendants ignored the presiding judge, Col. James Pohl, and refused to enter pleas as a protest against what they believe is an “unfair” system. Their pleas were deferred until a later date.

The arraignment, broadcast on closed circuit TV to 4 other military bases, was witnessed by members of the press, military officials, human rights advocates, and six family members who lost loved ones on 9/11. Some family members who spoke to the press after the arraignment were outraged at the cavalier attitude toward the hearing by the terrorists. The untried system of military commissions will no doubt slow the legal process down even more, as defense attorneys explore the limits of their client’s rights. President Obama and Congress amended the system in 2009 and gave the defendants more legal rights while denying some evidence from being presented that was obtained from the prisoners via “enhanced interrogation techniques.” Human rights groups still say the proceedings are unfair and wish the trials to take place in civilian court.

The five accused included the boastful mastermind of the attacks, Khalid Sheikh Mohammed; Ramzi Binalshibh, who allegedly scouted flights schools; Waleed bin Attash, who allegedly ran a terrorist training camp in Afghanistan and researched flight simulators; Mustafa Ahmad al-Hawsawi, who allegedly supplied Western clothing and credit cards, as well as acting as a conduit for money to the hijackers; and Mohammed’s nephew, Ali Abd al-Aziz Ali, who also helped with financing the operation. The crimes committed by the 5 are outlined in an 87-page indictment that includes charges such as “conspiracy, attacking civilians, attacking civilian objects, intentionally causing serious bodily injury, murder in violation of the law of war, destruction of property in violation of the law of war, hijacking or hazarding a vessel or aircraft, and terrorism.”

It became clear that one of the tactics of defense lawyers — both civilian and military — was to put the entire concept of military commissions on trial. In pursuit of this goal, they have filed hundreds of motions challenging every conceivable aspect of the proceedings, leading Col. Pohl to put back the start of the trial until May, 2013.

The cloak of secrecy — necessary to protect counterterrorism methods and confidential informants — is one of the major bones of contention about the commissions pointed to by human rights groups. While evidence obtained from defendants at CIA black sites has been made inadmissible by congressional reforms, some testimony from witnesses who may have been “renditioned” will be accepted. And there will be no mention of alleged mistreatment of the prisoners by their attorneys, although Col. Pohl allowed he will hear motions challenging that matter. Also, as a matter of secrecy, attorneys will not be able to discuss the government’s treatment of their clients while in custody.

Commission critics say that secrecy could still be maintained at a civilian trial — a questionable supposition given the opportunity for the terrorists and their lawyers to wreak havoc under the far more generous protections granted by the Constitution in such a trial. The outrage expressed by both Republicans and Democrats to the Obama administration’s announcement two years ago that Mohammed and his 4 co-conspirators would be tried in New York City caused the Justice Department to beat a hasty retreat and the idea of a civilian trial was dropped.

Prisoners now have access to civilian defense attorneys who specialize in complex death sentence cases — at taxpayer expense. And it was from civilians that most of the posturing and courtroom antics came from. For instance, attorneys for two of the plotters asked that the entire 87-page indictment be read word for word — a right that is granted defendants but is rarely exercised. It took 2 1/2 hours and 6 prosecutors to plow their way through the mind-numbing legalese. At one point, it was thought that all 2,976 names of the 9/11 victims would be read aloud, but prosecutors only mentioned the number of dead without objection.

But that was a small blessing. There were constant interruptions and trivial objections. Binalshibh’s attorney, James Harrington, interrupted the hearing to inform the judge, “My client would prefer to have his name pronounced Bin-al-shib-ah.” Pohl acceded to the request while Binalshibh laid a rug on the floor and began to pray. No attempt was made to stop him.

One female attorney for Mr. bin Attash, Cheryl Bormann, came dressed to the hearing in an abaya, covered head to toe with only her face showing. She suggested that females on the prosection side do likewise, “so that our clients are not forced to not look at the prosecution for fear of committing a sin under their faith,” she said.

The defendants themselves were alternately defiant and disinterested. Mr. Bin Attash had to be brought into the courtroom chained to a wheelchair because he refused to enter voluntarily. They all refused to put on headphones to listen for the simultaneous translation in Arabic, so Col. Pohl ordered the loudspeakers in the courtroom to carry the translation. This slowed the pace of the hearing down even more as the defendant’s lawyers would often speak over the Arabic translation, causing confusion and forcing the translator to repeat. The Guardian referred to the “near-farcical scenes in which the defendants prayed, read the Economist, talked among each other and ignored the judicial events around them.”

At one point during the reading of the charges, Judge Pohl asked Mr. bin Attash’s attorney Capt. Michael Schwartz, who was the attorney who demanded that the charges be read in their entirety, why he wasn’t paying attention. “You are the one who wanted it to be read,” Pohl said. “Your honor, it’s not my right. It is my client’s right,” the lawyer replied.

All of these antics angered many of the family members of 9/11 victims who were granted access to the proceedings at Guantanamo after winning a lottery. Prominent spokesperson for the families, Debra Burlingame, whose brother Charles was a pilot of the plane that crashed into the Pentagon, said, “They’re engaging in jihad in a courtroom.” An emotional statement issued by Eddie Bracken, whose sister died in the World Trade Center, echoed the thoughts of many family members:
“I came a long way to see you, eye to eye. … If you would have this in another country, it would be a different story. They would have given you your wish to meet your maker quicker than you would realize. But this is America, and you deserve a fair and just trial, according to our Constitution, not yours. That’s what separates us Americans from you and your ideology,” he said.

The hearing will continue next month as Judge Pohl will entertain the first of several hundred motions filed by attorneys for the defendants.

Email ThisBlogThis!Share to TwitterShare to FacebookShare to Pinterest
Labels: 9/11/01, Islam and Terrorism