Future operations and Intellience sharing between Britain and the US may have been endangered by the leaking of sensitive details about the agent who infiltrated an al-Qaeda cell plotting an underpants bomb attack.

By Duncan Gardham, Tom Whitehead
The Telegraph
http://www.telegraph.co.uk/news/
11 May 2012 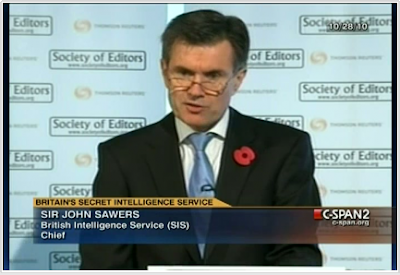 Both MI6 and the CIA are thought to be extremely unhappy that details of British undercover agent became public.


President Obama’s Administration was criticised yesterday and a top-level investigation opened in Washington after accusations that the information, released initially by unnamed US sources to an American news agency, had been used for political pointscoring.

Leon Panetta, the US Defence Secretary, condemned the disclosure. “As a former Director of the CIA, I have to tell you that those kinds of leaks are very harmful to the efforts of the intelligence community,” he said.

Downing Street declined to comment on the case. David Cameron's official spokesman told reporters at a regular daily briefing: "I understand there is an investigation under way, being led by the Americans. It is clearly a matter for the US authorities. Clearly, we think that sensitive information should be protected."

Nigel Inkster, a former assistant chief of MI6, said in a Twitter message: "The revelations about the British agent in AQ [al Qaeda] remind us that Beltway leaking is a major security threat," referring to the area of Washington DC.

Sir Malcolm Rifkind, chairman of the parliamentary Intelligence and Security Committee, said that leaks about operations could be "extremely harmful."

"It can prevent the effective involvement of intelligence officers or agencies in operations that are designed to save lives either in this country or other countries," he added.

"Whether a leak arises in the US, the UK or elsewhere it is equally serious."

Patrick Mercer, the former chairman of the parliamentary sub-committee on Counter-Terrorism, said there was "inevitable friction" between the US and UK intelligence agencies, partly because the British agencies have to deal with a plethora of different American agencies.

The British agent who risked his life to infiltrate the al-Qaeda cell plotting had been working undercover for up to a year, The Daily Telegraph has learnt.

As well as smuggling out the latest version of the bomb, the agent was able to pass on vital information to his handlers about the movements of al-Qaeda in the Arabian Peninsula (AQAP).

His covert mission in Yemen also gave him an insight into the future plans of master bomb-maker Ibrahim al-Asiri, which include using cameras and hard disk drives to try and hide explosives.

Sources have told The Daily Telegraph that the agent was moving in fundamentalist Islamic circles in Britain and at least one other European country when he was recruited by MI5, with the help of Saudi intelligence.

He is said to be in his late twenties or early thirties and of "Middle Eastern" origin. According to a report by the Associated Press last night, he was not originally a British citizen but was given the passport "as part of the ruse."

He travelled to Sana'a, the capital of Yemen, where he joined an Arabic language school in order to make contact with al-Qaeda extremists.

In doing so, he was following in the footsteps of Umar Farouk Abdulmutallab, the Nigerian student who had studied in London and tried to blow himself up on a trans-Atlantic flight to Detroit on Christmas Day three years ago using a similar device.

British and Saudi intelligence officers were hoping that the agent's British passport would make him an "irresistible" attraction for al-Qaeda seeking to get a suicide bomber onto a US-bound plane.

His handler was a Saudi intelligence officer who travelled with him to Yemen and helped him attract the attention of al-Qaeda and communicate with headquarters once he was undercover, one source said.

He is said to have been in the mountainous region of Shabwa in southern Yemen for several months and was waiting in Sanaa for some time before that, the source added.

He left two weeks ago on his "mission" and once he was safely back with his handlers, the CIA began a series of drone strikes against AQAP.

The risk he was taking was illustrated in March, while he was still under cover, when a video was released by AQAP in which three men confessed to being paid by the authorities to provide information for American drones to target the fighters.

The video then showed a prisoner being forced to his knees, as one of the fighters declared the man was a Saudi spy who hoped to infiltrate al-Qaeda and sentenced him to death.

The screen then went blank and a shot was heard to cries of "Allahu Akbar" [God is great].

In a rare public speech two years ago, Sir John Sawers, the chief of MI6, made a plea for secrecy, adding: "a lot is at stake."

"Secret organisations need to stay secret," he added. "If our operations and methods become public, they won't work."

The reason for the secrecy was to avoid putting undercover agents – the secret sources used by MI6 officers - at risk, he explained.

If they are exposed they "can get identified, arrested, tortured and killed by the very organisations who are working against us," he added.