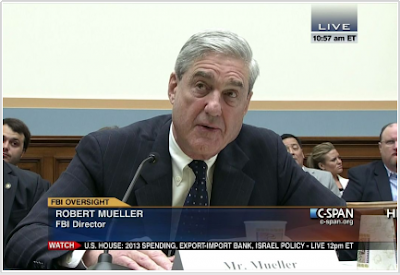 When FBI Director Robert Mueller testifies today for a House Judiciary Committee oversight hearing [1], undoubtedly he will be questioned about the FBI’s ongoing “Islamophobia” purge [2].
Specifically, members of Congress are concerned about the FBI’s continued secrecy [3] regarding the identity of the three outside subject matter experts (SME) the bureau brought in to help with the purge (two other SMEs from inside the FBI assisted). One reason for congressional skepticism about the FBI’s use of these outside SMEs is that the bureau has an extensive history of failure when vetting Muslim outreach partners.

In June 2002, Director Mueller took fire [4] for a speech to the American Muslim Council (AMC), which his spokesman described [5] as “the most mainstream Muslim group in the United States.” During his speech Mueller asked the group [6] for their help in fighting terrorism. But the head of AMC at the time was Abdurahman Alamoudi, who was videotaped [7] in October 2000 delivering a speech just yards away from the White House, proclaiming: “I have been labeled by the media in New York as being a supporter of Hamas. We are all supporters of Hamas. I wish they added that I am also a supporter of Hezbollah.”

That same year, AMC board advisor and former acting President [4] Jamil Al-Amin was arrested for murdering a Georgia police officer. Alamoudi was arrested [8] in 2003 in a Libyan assassination plot targeting the Saudi crown prince, and was later identified [9] by the U.S. Treasury as one of al-Qaeda’s top fundraisers [10] in the United States.

At the time of Mueller’s speech in 2002, Alamoudi had been under investigation by the FBI for almost a decade for funneling money [11] between Osama bin Laden and “Blind Sheikh” Omar Abdel Rahman. During the AMC conference at which Mueller spoke, Alamoudi approached [12] Jewish Forward D.C. bureau chief Eli Kintisch are warned him that it might not be “good for your health” to remain at the event (ironically, during a panel discussion on “American Muslims and the Media”), prompting the reporter to leave.

In October 2003, just days before a ceremony honoring Detroit Muslim leader Imad Hamad and bestowing on him the Director’s Award for exceptional public service, the FBI contacted Hamad to tell him he wasn’t receiving the award [13]. The FBI initially claimed they had decided to give the award to a victim of the 9/11 terror attacks, but later an FBI spokesman revealed that unflattering information about Hamad had been made public during the deportation proceedings for one of his close associates.

In fact, the Immigration and Naturalization Service (INS) fought for two decades to deport Hamad for his suspected support for the Popular Front for the Liberation of Palestine (PFLP), a designated terrorist organization. That information had come to light not due to any checking or vetting by the FBI, but thanks to an article published [14] by the New York Post days before Hamad was stripped of the award. In recent days, Hamad has been quoted [15] encouraging the FBI’s ongoing “Islamophobia” purge.

During the trial of Palestinian Islamic Jihad leader Sami Al-Arian, the terror leader’s attorney attempted to subpoena evidence of meetings and conversations that Al-Arian had with high-ranking officials at the Department of Justice, the Department of Homeland Security, the speaker of the House of Representatives, and even the White House. Al-Arian had gained access [16] to the highest levels of the U.S. government despite having been subject to FISA wiretap warrants [17] since the early 1990s and having his home raided in 1995. As part of a plea deal [18], Al-Arian admitted [19] to being part of the leadership structure of the terrorist group and knowingly supporting the terrorist organization.

In 2008, Mueller handed [20] one of his Director’s Community Leadership Awards to Imam Yahya Hendi, who had testified [21] during Al-Arian’s trial as a defense witness. According to testimony [22] delivered to the 9/11 Commission, Hendi had served as a moderator during a 2000 fundraiser for the Benevolence International Foundation, which was shut down in November 2002 by the U.S. government and designated [23] a terrorist organization for its support of al-Qaeda and several other Islamic terrorist groups.

The FBI has a long history of partnering [24] with groups accused of supporting Islamic terrorism. Among the first groups appointed [25] to the FBI’s Arab, Muslim, and Sikh Advisory Council following the 9/11 attacks was the Council on American-Islamic Relations (CAIR). After CAIR was named an unindicted co-conspirator [26] in the largest terrorism financing trial in American history, an FBI agent testified [27] during that trial that CAIR was a front for the terrorist group Hamas. Federal prosecutors also told [28] a federal court: “From its founding by Muslim Brotherhood leaders, CAIR conspired with other affiliates of the Muslim Brotherhood to support terrorists.” The FBI was publicly forced to sever ties [29] with CAIR.

As I reported exclusively [30] here at PJ Media last year, top FBI officials have continued to meet unofficially with CAIR, even to the point of working to conceal [31] their ongoing relationship. This is despite CAIR warning its members last year to avoid speaking [32] with the FBI.

Another story I broke [33] in September 2010 detailed the inclusion of known Hamas cleric Kifah Mustapha. As part of a six-week FBI Citizens’ Academy, he was treated to guided tours of the top-secret National Counterterrorism Center (NCTC), FBI Headquarters, and the FBI Academy at Quantico. Mustapha’s participation in the FBI program came after he was personally named [34] an unindicted co-conspirator in the Holy Land Foundation trial and his appointment as a Muslim chaplain to the Illinois State Police had been revoked [35] (a background check revealed his terrorist ties and support [36]).

After the publication of my report, the FBI doubled-down [37] on its support of Mustapha, dismissing his extensive Hamas connections and calling him an important Chicago-area Muslim leader. But when Mueller was asked [38] about it following a speech he gave a week later, he refused to answer questions [39] about Mustapha’s participation in the program. Court documents filed by the Chicago U.S. Attorney’s Office in response to Mustapha’s discrimination lawsuit [40] against the Illinois State Police revealed that the special agent in charge of the Chicago FBI field office — the same office that had sponsored the Hamas cleric in the FBI Citizens’ Academy — had warned the state police that Mustapha would never be able [41] to pass a background check for a similar position with the FBI. Yet the FBI’s own website [42] states that a background check and interim security clearance are necessary for participation in the FBI Citizens’ Academy.

When Time featured a profile [43] on Mohamed Majid — imam of the All Dulles Area Muslim Society (ADAMS) Center and current president of the Islamic Society of North America (ISNA) — in November 2005, it highlighted Majid’s award [44] from the FBI for “the imam’s cooperation in the war on terror,” claiming that “Majid regularly tips off the bureau.” But in a letter [45] to the ADAMS Center community the day after the Time article appeared, Majid told his mosque members that he did no such thing (the letter has now been taken down from the ADAMS Center website, but is still available [45] through Internet Archive).

Majid made clear that he never reported on anyone in the Muslim community, and his relationship with the FBI was one-sided, with the outreach meetings intended “solely to create avenues to work with law enforcement to preserve our civil liberties and civil rights.” It should come as no shock that Majid has recently met with top DOJ officials urging the criminalization of criticism of Islam [46] and has been one of the most vocal cheerleaders for the FBI’s training “Islamophobia” purge, meeting at least twice [47] with FBI Director Mueller on the topic.

Last September, Mohamed Elibiary was given [48] the FBI’s Louis E. Peters Memorial Award in a ceremony at Quantico for his help with the FBI as a “deradicalizer” within the Muslim community. But the two cases that Elibiary trumpets — the case of five D.C. kids who went to Pakistan to fight U.S. troops, and that of “Underwear Bomber” Umar Farouk Abdulmutallab — are cases of his “deradicalization” subjects jumping headlong into terrorism, not away from it.

Questions were raised in October 2010 when Elibiary was appointed [49] to the Department of Homeland Security’s Advisory Council in light of his previous appearance at a Dallas conference honoring Ayatollah Khomeini [50], his defense [51] of jihadist ideological godfather Sayyid Qutb, and his veiled threats [52] against the life of Dallas Morning News editor Rod Dreher.

As I reported here exclusively at PJ Media back in October, Elibiary was caught downloading documents [53] from a secure DHS server, which he then tried to market to a left-leaning publication claiming they represented a pattern of Islamophobia by the Texas Department of Public Safety. I subsequently reported that Elibiary’s non-profit organization had its tax exempt status revoked [54] for failing to file the required IRS Form 990s. Elibiary continues to work with the FBI and serve on the DHS Advisory Council today, and he too has been an outspoken advocate of the ongoing “Islamophobia” purge. He was described in one article [55] as the “FBI’s Key Muslim Ally” and complained that “bigoted briefings make my job harder.”

The FBI’s Muslim outreach hasn’t always gone as planned, such as during the March 2008 Community Relations Executive Seminar Training (CREST) program hosted by the Ohio chapter of CAIR. During the session tempers reportedly flared [56] and the three FBI agents addressing the crowd barely escaped violence. More recently, an FBI outreach event in Seattle intended to improve communications and to build trust with the Muslim community grew heated [57] when attendees complained that the FBI’s presentation focused too much on Islamic terrorism, and that a slide on state-sponsored terrorism showed a picture of former Iranian leader Ayatollah Khomeini.

Unfortunately, the above are just a small selection from the FBI’s Muslim outreach follies. But they are representative of the ongoing failure by the FBI under Director Mueller’s tenure to properly vet their outreach partners.

With these episodes in mind, the concerns expressed by members of Congress — concerns regarding the FBI’s selection of outside SMEs chosen to purge their training programs and materials for supposed “Islamophobia,” and the FBI’s refusal to divulge the names of the SMEs claiming such information is classified — are reasonably rooted in the bureau’s long history of Muslim outreach failure.

Email ThisBlogThis!Share to TwitterShare to FacebookShare to Pinterest
Labels: Islam and Terrorism, Islam and The West