Craven and Pusillanimous at the Chronicle 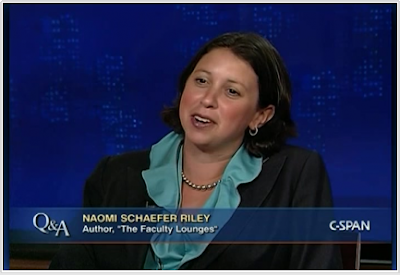 The Chronicle of so-called higher education, that is.

On April 30, Naomi Schaefer Riley wrote a column for “Brainstorm,” the Chronicle’s blog, called “The Most Persuasive Case for Eliminating Black Studies? Just Read the Dissertations [1].” When I say that there was nothing new in Ms. Riley’s column, I do not mean to disparage it. No: it is a splendid piece, a public service, really. It performs exactly the same service as the child in Hans Christian Andersen’s tale “The Emperor’s New Clothes.” Everyone knows, though few have the temerity to say, that “Black Studies” is an awful confidence game: an exercise in racial grievance mongering utterly without scholarly merit. In this, I hasten to add, it resembles many other pseudo-disciplines invented since the late 1960s to provide a home for intellectually challenged but politically fermenting denizens of our universities: Women’s Studies, Gay and Lesbian Studies, Transgender Studies, etc. etc. Kingsley Amis once observed that much that was wrong with twentieth century academia could be summed up in the word “workshop.” “Studies” is the new “workshop.” Take a look at the “dissertations” Ms. Riley describes. They are cringe-making in their awfulness. Consider:
And on it goes. Riley concludes with this sterling bit of advice: “If these young scholars are the future of the discipline, I think they can just as well leave their calendars at 1963 and let some legitimate scholars find solutions to the problems of blacks in America. Solutions that don’t begin and end with blame the white man.” But of course if you subtract the racialism from such works you would be left with… nothing. That’s what they essentially are: politicized exercises in race mongering.

As I say, Riley’s brief column only highlights what we all know to be true about the pseudo-discipline of Black Studies. And what was the upshot of her foray into the forbidden territory of truth about this embarrassing subject? A cataract of outrage from readers of the Chronicle’s blog — almost all of whom are academics — and, in an exhibition of academic editorial independence and courage, a craven apology and dismissal notice from Liz McMillen, the editor of the Chronicle.
Why is it that more and more editors these days seem to respond to any controversial piece — controversial in challenging the reigning political pieties, that is — by public rituals of ostracism?
Their first response to speech they or some of their readers don’t like is to rusticate the offender while loudly assuring the public of their own spotless virtue. Ms. McMillen’s “Note to Readers [2]” is an especially emetic example of the genre. Riley’s column did not, she began, “did not conform to the journalistic standards and civil tone that you expect from us.” Really? In what ways was it deficient, either in substance or tone? Read what Riley says above: her chief sin seems to have been to shine a bit of daylight on the shadowy academic racket.

“We heard you,” Ms. McMillen pleadingly cries to her mob. We heard you and “We now agree that Ms. Riley’s blog posting did not meet The Chronicle’s basic editorial standards for reporting and fairness in opinion articles. As a result, we have asked Ms. Riley to leave the Brainstorm blog.” “Now.” What a world of smarmy evasiveness is contained in the little adverb. Now that the mob is baying for blood, I am happy to chuck the ideal of robust journalism and throw Naomi Riley under the bus. Back when she published it, all was well. (Though I never reviewed it! It was not my fault!) It was only when there was public criticism that my politically correct antennae began to twitch and I found that craven capitulation was the best route to editorial high-mindedness.

Disgusting. Even more craven is Ms. McMillen’s concluding apology “for the distress these incidents have caused our readers.” Are the Chronicle’s readers really such delicate plants? Well, as I say, almost all of them are academics, so the answer is undoubtedly Yes.

The Chronicle of Higher Education has long been receding into semi-senescent irrelevance. This latest episode underscores its moral bankruptcy as well. What a pathetic showing.

See also Ron Radosh: How the Academic Establishment has Silenced a Major Critic of the Field of “Black Studies” [4]


[1] The Most Persuasive Case for Eliminating Black Studies? Just Read the Dissertations: http://chronicle.com/blogs/brainstorm/the-most-persuasive-case-for-eliminating-black-studies-just-read-the-dissertations/46346

[4] How the Academic Establishment has Silenced a Major Critic of the Field of “Black Studies”: http://pjmedia.com/rogerkimball../../ronradosh/2012/05/08/how-the-academic-establishment-has-silenced-a-major-critic-of-the-field-of-black-studies/
Posted by jtf at 7:05 AM