Book Review: In the Shadow of the Sword

A historical look at the birth of Islam 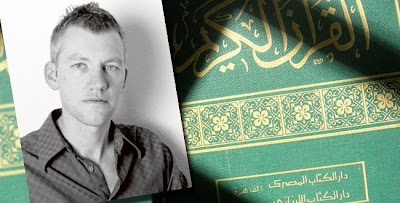 If I were a theologian, my idea of Valhalla would be something like a villa in Languedoc, an endless supply of red, a smoke (I assume that won't be a problem in the afterlife) and a good history book.
Among my favourite authors is Tom Holland (pictured above), whose previous publications Rubicon, Persian Fire and Millennium have accompanied me on those increasingly rare periods of relaxation abroad.

Holland writes about antiquity with great flair and authority, capturing the sense of struggle, anxiety and desperation that often overshadowed great men and great civilisations as they battled for supremacy (and anyone who doubts Steven Pinker’s thesis that we are all getting nicer and less violent should study ancient history more closely).

Holland’s latest, In the Shadow of the Sword, takes a look at a period of antiquity, the 6th and 7th centuries, that has fallen to the very back of the western mind, largely because for our ancestors the light of civilisation had gone out (or had not yet been switched on); in the eastern Mediterranean and Near East, however, the Roman Empire continued much as normal, although now centred in Constantinople and speaking Greek. During this period the Romans battled for supremacy with the Persian Empire, occasionally fighting ferociously in Mesopotamia or Syria but more often in a state of uneasy truce.

But Holland’s latest book is interesting in a different way, for as Charles Moore noted on Monday, it delves into a seriously controversial area – the birth of Islam.

The Near East at the time was a fascinating hodge-podge of different faiths; Holland opens the narrative with the story of Yusuf As’ar Yath’ar, an Arab king who defeated the Christians in the Najran region by the Red Sea – the twist being that Yath’ar was not Muslim but Jewish, and there were communities of both living in Arabia at the time.

And sometimes the dividing line between the faiths was unclear. Further north in modern-day Iraq, where Jews had lived for a millennium and Christians for several centuries, there were Jews who still prayed to Jesus and Christians who practised Jewish rites. Iran itself was Zoroastrian, the world’s oldest major religion: although today rather tiny (Freddie Mercury is perhaps the only Zoroastrian many of us could name) it was to influence Islam heavily, as Holland points out. Another even smaller group, the Samaritans (so small in number that they’ve been forced to marry out for genetic reasons) were still a significant force at this time, before their strength was broken by two failed uprisings.

Further out in the wilds of Arabia there were all sorts of pagans, some of who worshipped cubes (which seems to have been a particular thing with Arabs at the time).

And it was out of this wilderness that came one of the world’s great religions, whose followers would in a short space of time conquer an empire from Spain to central Asia, and whose scholars would form a coherent religion that has flourished to this day.

And yet from a historical point of view the study of Islam and its founder is problematic. The oldest biographies of Mohammed, in the form we have them, date back to more than two centuries after his death, and despite the diligent work of Al-Bukhari, who is said to have collected 600,000 supposed sayings of the prophet and dismissed all but 7,225, the religion is as vulnerable to higher criticism as Judaism and Christianity.

That criticism, which began with historians such as Edward Gibbon and accelerated in 1863 when Ernest Renan published a biography of Jesus that treated his subject as a man, leading one critic to describe it as a “new crucifixion of Our Lord”, has been irreversible.

Yet while in the 18th century Muslim jurists concluded that the “gate of interpretation” was closed because all there was to learn had been learned, by the late 19th century Western scholars such as Ignác Goldziher also began to ask questions about Islam, especially about the hadiths, the collection of sayings that made up the Sunna, or Islamic law – a question that Muslim scholars had asked a thousand years before (concluding that many were fakes).

And in the past four decades Islam has come under a far more rigorous microscope. In 1950 the German professor Joseph Schacht wrote that: “We must abandon the gratuitous assumptions that there existed originally an authentic core of information going back to the time of the Prophet.”
Instead, as Holland concludes, many of the inventions of Islam already existed at the time it arose. It seems unlikely that Mecca, so biographers of Mohammed say, was a pagan city, devoid of any Jewish or Christian presence, in a great desert. This would indeed make the rise of fully-fledged monotheism there, complete with references to Abraham, Moses and Jesus, a miracle. As Holland writes:


Muslims, understandably sensitive to any hint that the Prophet might have been a plagiarist, have always tended to resent the inevitable implications of such a project; and yet, once God is discounted as an informant, it is surely not unreasonable to wonder just how it came to be that so many characters from the Bible feature in the Qur’an.

And, as with all religions, much of Islam was probably formed in the centuries after the original founder, following the Arab conquests of the Near East, and was influenced by the religions of that region. While the Koran, for example, suggests that adulterers should be whipped, the hadiths, and Muslim jurists, demand stoning, which is probably an import from Judaism. Similarly, the call to pray five times a day probably comes from Zoroastrianism.

Trying to operate a spiritual empire composed of conquerors and, now, the conquered, Muslim jurists constructed much of Islam in the 8th, 9th and 10th centuries. Holland says:


The Prophet had been made to serve as the mouthpiece for a whole host of rival, and often directly antagonistic, traditions. Many of these, far from deriving from Muhammad, were not even Arab in origin, but originated instead in the laws, the customs, or the superstitions of infidel peoples.

Stitching together a whole new legal framework for the infant empire, it had become the habit of these ingenious scholars to attribute their rulings, not to their own initiative or judgement, but rather to that ultimate in authorities: the Prophet.

It will be interesting to see if Islam continues to come under the same criticism as the other Abrahamic religions, and how believers respond. There are differences, of course: the German Biblical scholars did not have to face any physical threats, and criticism of the Bible came from within Christianity, which made it easier for Christians to take; far harder to accept criticism of one’s sacred traditions from outsiders.

Not that Muslims need feel threatened; after reading this fascinating sweep of the world of Justinian and the Shahanshah, and the desert folk who would beat both empires, it is hard to come away without a great admiration for the civilisation of early Islam. Neither, of course, is it a bad thing to learn just how much the world’s various civilisations owe to each other.


Tags: Charles Moore, In the Shadow of the Sword, Islam, Jesus, Koran, Prophet Mohammed, Roman Empire, Tom Holland
Ed West is a journalist and social commentator who specialises in politics, religion and low culture. He is @edwestonline on Twitter.
Posted by jtf at 5:40 AM