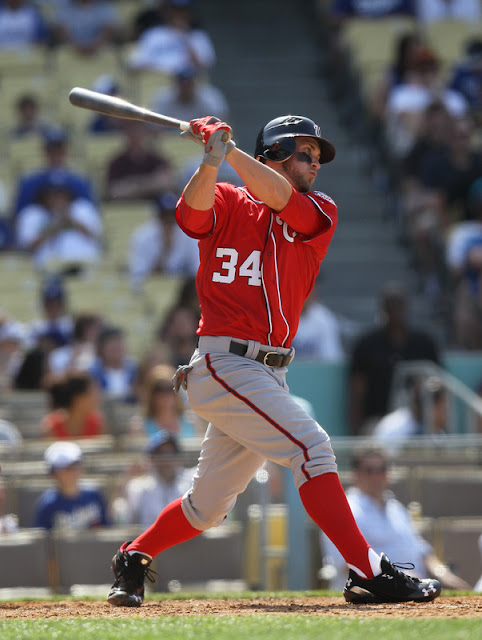 I’ve never seen a player enjoy his first 10 games in the big leagues as much as Washington Nationals rookie Bryce Harper, just revel in them, rise to them and gobble each day like he’s waited for it since he was born. And I’ve never seen a teenager have an impact on so many of those games in so many different ways, even as he has ignored the mistakes that reveal his age and skimpy pro experience.

This is a moment in baseball time that doesn’t come often and won’t last forever. They tell me the arrival of Willie Mays and Mickey Mantle in ’51 had the same aura of amazement and delicious uncertainty. I watched it with Ken Griffey, Jr., when he was 19 and combined every skill Harper now has, plus the grace of having played center field since first putting on a glove. Pete Reiser had it all, too, led the NL in nine categories at 22 in ’41, before he ran into so many walls he was taken off on a stretcher 11 times, given last rites on the field once and — with a fractured skull — still threw the ball back to the infield.

There aren’t many of them, these players who are both too talented and too young to believe, who might be anything or everything or, with one wrong component in their makeup, washed up before they’re 30, like Reiser.

I have no idea how good Harper will ultimately be, and no one else does either. Or, if they do, please report to 1600 Pennsylvania Avenue, because precise knowledge of the future should be put to better use.

Harper entered Thursday hitting .265 with six doubles and a .381 on-base percentage, which seems pleasant but normal, unless you’ve watched his games. He’s found a way to be a force in every one. He’s not a hitter, fielder, slugger, thrower or runner as much as he’s a hellbent here-I-am-world ballplayer.

Very few rookies, even those much older, seem so comfortable (if you can be comfy with your faux hawk on fire) as Harper clearly is now. He’s not faking focus; he’s just having a ball, except when he gets picked off or pops up the first pitch with men on base. Then he’s total get-you-next-time.

At roughly the same stage — very young and with similar plate appearances to Harper — famous bloom-early stars such as Griffey (.175), Tony Conigliaro (.152), Cal Ripken Jr. (.128), Mays (.139) and Mantle (.211) — weren’t doing so well. The record book says Ted Williams and Joe DiMaggio, from their first week, were already Ted Williams and Joe DiMaggio. So, if you trust such dusty old data (harrumph), Harper ain’t so hot.

But with Jayson Werth out for three months because of a broken wrist, it’s nearly certain that Harper, as long as he’s healthy, will be in the Washington outfield almost every day for the rest of the season. If Werth returns in August, the Nats aren’t going to send Harper to Class AAA only to jerk him right back up when rosters expand Sept. 1. Not happening. He’s here to stay.

Harper plays like a five-tool Pete Rose. That’s why Harper is so electric, so instantly accepted by his teammates, despite his age and occasional brashness. That’s why I will never forget to record a Nats game this season — okay, unless he goes 7 for 123.

So far, Harper has crashed into the Dodger Stadium center field wall to make a leaping catch. He has stomped on first base after a hellhound-on-my-trail sprint every time he has hit a routine grounder, even to the pitcher. He has taken an extra base, then stole home to get instant revenge against the Phillies for being drilled with a Cole Hamels fastball.

He has stretched singles that went barely beyond the infield into doubles. He has scored from second on a hit that rolled six feet onto the outfield grass. He has thrown out runners at the plate, including one on a low whistling 300-foot peg that the umpire nonetheless called, “Safe,” probably because he couldn’t believe what he had seen.

See, that .265 batting average isn’t, maybe, capturing everything that’s going on here. All those feats within 10 games don’t even count his violent batting practice, which sounds like an evening thunderstorm. Asked if he had ever seen anybody swing so hard in BP (while maintaining balance and mechanics), Davey Johnson said, “Mantle.”

Harper has made more adjustments, at-bat to at-bat, within one game than I’ve seen other young Nats player do at 23 to 26. Harper, so far, hasn’t chased many bad pitches, a telltale sign, and has more walks (six) than strikeouts (four). The only other man who played 100 games as a teenager who had more walks than strikeouts in his first 10 games was Rusty Staub (2,716 hits).

A few pitches around his letters have lured Harper. And low change-ups can be troublesome. But Harper looks like he’s jotting notes in his “book” just as fast as the pitchers are scribbling in theirs.

Once in a great while, a player makes our imaginations behave irresponsibly. Stephen Strasburg has already taken us there in the pitching realm. Now it’s Harper, too. We hear ourselves say silly things. As my wife admired Captain America in “The Avengers,” I whispered, “That’s how Bryce Harper is put together — well, if Captain America were about 30 pounds bigger.”

We know, eventually, his strengths and limits will be measured. In time, some air of professionalism will replace his wolfish open-grin ebullience. Why, before too many years pass, Harper will even learn what is impossible for him on a baseball field.

Right now, he honestly doesn’t know. But he’s trying to find out. We get to watch. It’s hard to imagine how baseball could be much more fun.