You say you want a revelation?

Listen to the intensified punch of Come Together, the majestic breadth of The Long and Winding Road, the modern sheen on Love Me Do and the renewed thrust in I Am the Walrus.

The Beatles catalog, digitally remastered for the first time, is arriving in stores Sept. 9 amid a joyful noise from fans. 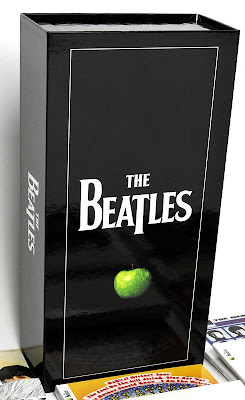 Audiophiles have long lamented the thin, shrill results of the music's 1987 transfer to CD, flaws magnified by advances in digital technology that enriched the recordings of peers with repeated remastering rounds.

"Even people listening on lower-quality ear buds and MP3s will hear a drastic jump in quality," says Beatles historian Matt Hurwitz, who heard a sampling of the new tracks. "We're hearing something a lot closer to the stereo and mono mixes produced in the '60s. This is the way The Beatles heard it."

Though frustrating for fans, the wait has heightened drama and value, says Beatles scholar Martin Lewis.

"Fans chomping at the bit felt that Apple was painfully slow responding to demand," he says. "But at least The Beatles haven't been overly repackaged like Elvis and The Who."

The collection includes 14 stereo albums, sold individually or in a box set, each with original U.K. vinyl track listings, artwork and liner notes, plus archival photos and added historical and recording notes. New QuickTime mini-documentaries are included in each CD except Past Masters, which combines the two 1988 single volumes into one set.

The Beatles in Mono, a box catering to completists, gathers 10 mono albums and two discs of mono masters. (Yellow Submarine, Abbey Road and Let It Be are missing because they were recorded in stereo.) Monos won't be sold separately, and EMI has no plans to press more mono boxes when the first run sells out.

"That's smart, because people who want the mono mixes want all of them," Hurwitz says. "It's for hard-core fans like me who want to understand what it all sounded like back then. In 1963, kids didn't have stereos. That's why (producer) George Martin felt so strongly about releasing those (early) albums in mono. We're finally getting to hear the true excitement of those recordings."

Among the mono treats: Paul McCartney's vamping coda on Sgt. Pepper's Lonely Hearts Club Band (Reprise), audible only on vinyl until now. And because bass was often suppressed on vinyl to prevent phonograph needles from jumping, expect more oomph from McCartney's Hofner.

The upgraded catalog "leaves the library pure," Hurwitz says. "It's now the definitive catalog, as close to the masters as technically possible."

The long and winding road to 09/09/09 began four years ago when Abbey Road engineers in London got the green light to transfer The Beatles tunes from analog tape to digital.

Though the original high-quality tapes showed no deterioration, the splicing-tape glue had dried up, causing segments to separate.

"It was slightly disconcerting on the first rewind of Please Please Me when the edits started coming apart," says Guy Massey, the project's senior recording engineer, during a playback session of remaster excerpts at Capitol Records.

Once tracks were ported one by one to digital files, engineers debated the extent of their scouring. Vocal pops, drop-outs, electrical clicks and bad edits were erased where possible.

"Some people argue that things like that should stay," says project coordinator Allan Rouse. "I don't agree. It's painful to listen to, and you would have dealt with it if you'd had the technology in the '60s. We've repaired those things to sound more pleasing."

Certain organic sounds, however, like Ringo Starr's creaky bass drum pedal on 1963's All I've Got to Do, stayed.

"In the piano chord at the end of A Day in the Life, you hear a squeaky chair," Massey says. "The Beatles probably would have removed it if they'd had the wherewithal. Unless they detracted from the performance, we've left things like that intact because they've become part of history."

Defying a trend toward excess, the team made modest use of "limiting," which shrinks dynamic range to make music sound louder. Only five of the 525 minutes of Beatles music was subjected to de-noising technology, used to reduce tape hiss.

Though the enhancements are subtle, fans will notice brighter, warmer sound and plenty of unearthed details. Engineers took greater liberties with the stereos than the monos.

"For the stereos, we haven't presented the original master tapes as they were, because we felt we could improve them," Massey says. "The monos are more representative of the master tapes. We've presented them in the best possible light."

Remastering significantly boosted sound quality, particularly on Revolver and The Beatles (aka the White Album). Remixing, the manipulation of separate tracks to alter the placement of vocals and instrumentation, could have yielded more dramatic results, but Apple has yet to green-light a catalog remix.

"That's the only thing that would make a massive difference," says Rouse, acknowledging that while some fans yearn for a full remix, purists regard it as retouching the Mona Lisa. "So far, some 120 Beatles songs have been remixed in 5.1 stereo for DVD, and they're great alternatives, but not replacements."

Fans who cry "revisionism" should seek out their old records or the mono set, McCartney says. "It's not like the originals have gone away. If you want what we consider an improvement, this is it, the stereo CDs. Our guys worked hard to get it faithful to the original."

John Lennon's widow, Yoko Ono, anticipates few objections to the retooled tunes, particularly since many consumers will be newbies.

"These songs aren't just old songs," she says. "They're new, too, because many people haven't listened to The Beatles yet."
Posted by jtf at 11:14 AM

Email ThisBlogThis!Share to TwitterShare to FacebookShare to Pinterest
Labels: Beatles