After the Governator, the Calculator

By George F. Will
The Washington Post
http://www.washingtonpost.com/
Sunday, August 30, 2009

SAN DIEGO -- The most ominous domestic event of the 1970s was the collapse of self-government in New York City, which before being put into receivership by the state was liberalism's laboratory. Since then, California has been the slate on which liberalism boldly writes its recipe for decline -- high taxes, heavy regulation, subservience to public employees unions and environmentalism that is simultaneously apocalyptic and chiliastic. 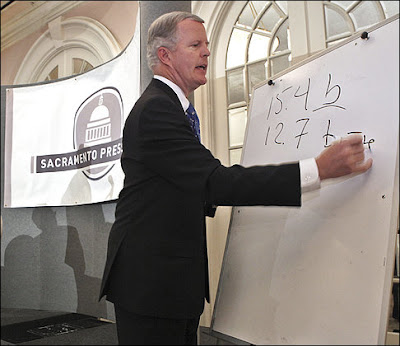 Tom Campbell outlines how he would balance California's budget at a debate in Sacramento in May. (By Rich Pedroncelli -- Associated Press)

Because California's calamitous present -- creative accounting as a rickety bridge to the next budget crisis, coming soon -- might prefigure the nation's future, next year's gubernatorial election is portentous. An especially intriguing candidate in a colorful field is Tom Campbell. Colorful he is not. "Talk softly and carry a small calculator" could be his motto. What glitter, however, are his résumé and agenda.

He has a Harvard law degree and a doctorate in economics from the University of Chicago, where his faculty adviser was Milton Friedman. He clerked for Supreme Court Justice Byron White. Working in the Reagan administration in 1983, in the wake of a severe recession, he assumed Reagan would lose in 1984 ("proof of my political acumen," he says; Reagan carried 49 states) and accepted a professorship at Stanford's law school. He represented Silicon Valley in Congress for five terms. He unsuccessfully sought the Republican nomination for the Senate in 1992. He won the nomination in 2000 but lost the election. His third statewide run might work because, after Arnold Schwarzenegger's childlike faith in personality as the conqueror of problems, blandness may be charismatic.

There is no constitutional mechanism to do for California what the state of New York did for New York City in 1975 -- transfer to an improvised authority responsibility for problems the political process cannot solve. But having been California's financial director in 2004-05, Campbell believes politics can restore something like the "Gann limit," a constitutional provision that, from 1979 to 1989 (California's malleable constitution only intermittently constitutes), limited annual spending by a formula based on inflation and population growth.

He favors resetting the budget cycle so that the state would accumulate one year's revenue to be spent the following year, when precise knowledge would replace wishful thinking about available revenue. He would aggressively use the line-item veto by which governors can reduce as well as eliminate particular spending items. He thinks Berkeley and UCLA are providing an education comparable to Stanford's and should be priced accordingly, with higher tuition and compensating scholarships for the needy.

He favors a constitutional convention to reform the ballot initiative process by forcing proponents of particular propositions to stipulate the taxes they would raise or programs they would cut to pay for their measures. But only if a convention can be limited to specific changes stipulated in advance. He knows that the 1787 Constitutional Convention, which was called to merely revise the Articles of Confederation, scrapped them and started fresh.
Campbell's two rivals for the Republican nomination -- former eBay chief executive Meg Whitman and another tech entrepreneur, Steve Poizner, currently California's insurance commissioner -- are rich. Campbell is a professor. Whoever wins the nomination, he says, will quickly become flush with funds. Yes, but you cannot steal first base in politics either. How can he be nominated?

Like this, he says: Gray Davis, a professional politician of modest means, won the Democratic nomination in 1998 when two rich opponents nullified each other with media bombardments. Republicans are a shriveling tribe: Their registration is at a record low, 31.1 percent, and they do not have a majority of registered voters in any of California's 53 congressional districts. Democrats have a registration majority in 20 districts, and a statewide registration advantage of more than 2 million and growing. But the fastest-growing cohort of voters are independents who can vote in either party's primary. Campbell believes he is energizing them inexpensively by buying lists of likely voters (those who have voted in four of the past five elections), inviting 150,000 to call in to an enormous conference call, and discussing issues for 90 minutes with the 20,000 who do.

If nominated, Campbell will face either the once-exotic but still canny Jerry Brown, who will be 72 and perhaps familiar to a fault, or Gavin Newsom, 41, San Francisco's dashing and evidently delusional mayor, whose campaign suggests that the bankrupt state's biggest problem is its denial of same-sex marriage. If Campbell is nominated, he can win, but if Californians were sufficiently rational to nominate him, their state would not be shambolic.

georgewill@washpost.com
Posted by jtf at 11:54 AM