On Saturday, the late Sen. Edward Kennedy, who supported legal abortion, was hailed as "a beacon for social justice" at a Catholic church in Boston. On Friday, The New York Times reported on Catholic bishops speaking out against anti-life provisions in various versions of the proposed health care reform in Washington: "The bishops' backlash reflects a struggle within the church over how heavily to weigh opposition to abortion against concerns about social justice."

An expert confirmed: "It is the great tension in Catholic thought right now," said Cathleen Kaveny, a professor of law and theology at Notre Dame.

The fights exist. But reports of a "great tension" are exaggerated. Fundamentally, what is social justice if it does not include the very right to life? 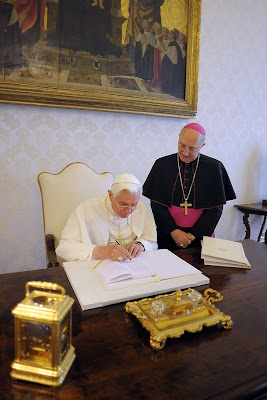 The event stood in contrast to much of the media coverage following the encyclical's release. Many conservatives immediately groaned about its expressed need for "a true world political authority." Liberals celebrated the same. Many are missing the soul of it. The Pope described "charity in truth" as the "principal driving force behind the authentic development of every person and all humanity" and the "heart of the church's social doctrine."

"Social justice doctrine" doesn't belong to any one political party or ideology. Rather, it poses challenges to all of us.

Dolan presented the continuum with a fourfold focus on the innate dignity of the human person ("every man and woman is made in the image and likeness of God"), the common good ("everything we do has a social implication"; "an economic decision is also a moral decision), solidarity ("we're in this together"; "we are social beings . . . brothers and sisters of a common Father"; "always be aware of the implications"), and subsidiarity ("apprehension of big, huge, massive bureaucracy, especially when it comes to the protection of the basic unit of human life, the family").

The integrated message of focusing on these fundamentals is: Be not confused. In this way, though, the forum was very different from most of the media coverage immediately following the release of the Holy See's latest contribution to the church's social justice canon and some of the misleading messages stemming from Kennedy's Catholic sendoff.

The encyclical states, unsurprisingly: "When a society moves toward the denial or suppression of life, it ends up no longer finding the necessary motivation and energy to strive for man's true good." This underscores a great shame of our current political discussions involving Catholicism: They're always focused on abortion because of the endless game we're subjected to by Catholic politicians pretending that they can advocate for legal abortion with right reason and clear conscience.

While we listen to the Gospel According to Nancy Pelosi and ignore the Kennedy contributions to cementing a culture of death, we are deprived of an even deeper conversation about just what social justice is, how exactly to best serve the common good. It doesn't necessarily mean "government gives." It's a lot more complicated. And the political conversation could benefit from some shepherding from a position of love and truth. Unfortunately, at the moment we're still focused on just trying to stay alive.

Lopez is editor of National Review Online.
Posted by jtf at 7:19 AM