"I have always tried to be a faithful Catholic, Your Holiness," Ted Kennedy wrote to Pope Benedict XVI, in a letter dramatically read by Theodore Cardinal McCarrick at the senator's burial, "and though I have fallen short through human failings, I have never failed to believe and respect the fundamental teachings."

Though Kennedy's words may strike detractors as a preposterous revision of history, it's worth considering that it's often the sinner rather than the saint who finds strength from the church. In a life that endured the violent deaths of four siblings, three miscarried children, and countless scandals, Ted Kennedy may have indeed, particularly during his prolonged illness, turned to his faith. Who, but God, can judge the content of a man's soul? 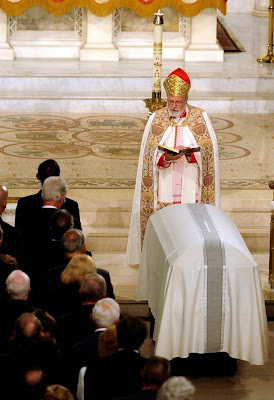 But it's not Senator Abortion's 11th hour effort to transform himself into Senator Catholic that has the media up in arms. "Why couldn't the pope have replied in his own name?" Sam Donaldson incredulously asked on This Week with George Stephanopoulos. "I was disappointed." Time magazine found it noteworthy that a shepherd with a flock of more than 1 billion would respond in "silence" to the senator from Massachusetts's missive.

In 1939, Pope Pius XII issued the Eucharist to seven-year-old Ted Kennedy, who, biographer Joe McGinniss claims, was "the first American citizen ever to receive his first holy communion from a pope." In the seventy years since, Ted Kennedy's relationship with the Catholic Church has been problematic, to say the least. From receiving communion at Mary Jo Kopechne's funeral, to procuring an annulment for a marriage of 25 years that had produced three grown children, to revelations during the William Kennedy Smith rape trial that the senator had woke his son and nephew on Good Friday to instigate the ill-fated carousing in Palm Beach's bars, Ted Kennedy hasn't exactly acted as a model Catholic.

Highlighting this is the other major story -- the transformation of the Kennedy Compound into a museum -- to emerge from the Kennedy funeral. "Rose [Kennedy] wanted to turn the place over to the Benedictine monks before she died," Benedict Fitzgerald, the late Kennedy matriarch's personal attorney, told author Ed Klein for his book Ted Kennedy: The Dream That Never Died. "I drew up the legal papers for her on my front porch. But when Ted found out about it, he ripped the thing in half. There was no way he was going to have the place turned into a monastery." Instead, as Fox News reported, "The Kennedy compound in Hyannis, Mass. will be converted into an educational center and museum as a tribute to the late Sen. Edward Kennedy."

With Boston archbishop Sean O'Malley offering a blessing at the senator's funeral, and the former archbishop of Washington, D.C. presiding over the burial, many of Kennedy's political antagonists are outraged, not that the Church was silent, but that it so loudly honored a man who fought to undermine church teaching.

"No rational person can reasonably be expected to take seriously Catholic opposition to abortion when a champion of the Culture of Death, who repeatedly betrayed the Faith of his baptism, is lauded and extolled by priests and prelates in a Marian basilica," C.J. Doyle, executive director of the Catholic Action League of Massachusetts, explained on Saturday. "This morning's spectacle is evidence of the corruption which pervades the Catholic Church in the United States."

THOUGH TED KENNEDY never won the role his supporters had scripted for him, those emotionally invested in "President Ted Kennedy" acted as though he had. Massachusetts's senior senator often played along, compiling a staff that dwarfed those of his colleagues and acting as a shadow president for various liberal constituencies outside of power in a conservative age. The prolonged made-for-TV funeral, which traveled from Hyannis to Boston and then from Capitol Hill to Arlington National Cemetery, was a mourning event fit for a president. But Ted Kennedy was a senator, not a president.

That fact alone, leaving aside Kennedy's friction with the church over abortion, gay marriage, and other hot-button issues, should explain why the pope added no further fuel to the public relations juggernaut that has dominated the American news cycle for almost a week. Those generationally, geographically, or politically tethered to Camelot mythology are befuddled why others, particularly the pope, haven't embraced their delusion that the man whom they had wished to be president should be mourned as a president -- rather than a parochial figure infused with special meaning to baby boomers, New Englanders, and the Democratic Party's left wing.

"Here in Rome, Ted Kennedy is nobody," a Vatican official bluntly told Time. "He's a legend with his own constituency. If he had influence in the past, it was only with the Archdiocese of Boston, and that eventually disappeared too."

"Running against a Kennedy is almost like running against the church," one Massachusetts pol observed during Ted Kennedy's initial run for Senate in 1962. But after Ted Kennedy enlisted as a combatant in the culture wars against his church, few conflate Kennedyism with Catholicism as they did a half century ago.

- Daniel J. Flynn, the author of A Conservative History of the American Left, blogs at http://www.flynnfiles.com/.