Kennedy and the KGB

Shortly after the announcement of Ted Kennedy's death, I had already received several interview requests. I declined them, not wanting to be uncharitable to the man upon his death. Since then, I've seen the need to step up and provide some clarification. 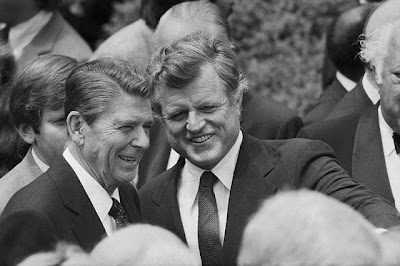 The issue is a remarkable 1983 KGB document on Kennedy, which I published in my 2006 book, The Crusader: Ronald Reagan and the Fall of Communism (HarperCollins). The document is a May 14, 1983 memo from KGB head Victor Chebrikov to his boss, the odious Soviet General Secretary Yuri Andropov, designated with the highest classification. It concerns a confidential offer to the Soviet leadership by Senator Kennedy. The target: President Ronald Reagan. (A pdf file of the original Russian language document and an English translation are available here.)

With Kennedy's death, this stunning revelation is again making the rounds, especially after Rush Limbaugh flagged it in his "Stack of Stuff." I'm being inundated with emails, asking basically two questions: 1) is the document legitimate; and 2) what does it allege of Senator Kennedy?

First off, yes, the document is legitimate. If it were not, I would have never reported it. Over the years, from my book to radio and web interviews, I've provided specifics. Briefly summarized, here are the basics:

The document was first reported in a February 2, 1992 article in the London Times, titled, "Teddy, the KGB and the top secret file," by reporter Tim Sebastian. Russian President Boris Yeltsin had opened the Soviet archives. Sebastian discovered the document in the Central Committee archives specifically. When his article appeared in the Times, other on-site researchers dashed to the archives and grabbed their own copy. Those archives have been resealed.

The Times merely quoted the document and ran a tiny photo of its heading. Once I got ahold of it later, I published the entire text (English translation) in my book.

Importantly, when I published the document, Senator Kennedy's office didn't dispute its authenticity, instead ambiguously (and briefly) arguing with its "interpretation." This was clever. The senator's office didn't specify whether this interpretation problem was a matter of my personal misunderstanding of the document or the misunderstanding of the document's author, Chebrikov. Chebrikov couldn't be reached for comment; he was dead.

So, what was the offer?

The subject head, carried under the words, "Special Importance," read: "Regarding Senator Kennedy's request to the General Secretary of the Communist Party Y. V. Andropov." According to the memo, Senator Kennedy was "very troubled" by U.S.-Soviet relations, which Kennedy attributed not to the murderous tyrant running the USSR but to President Reagan. The problem was Reagan's "belligerence."

This was allegedly made worse by Reagan's stubbornness. "According to Kennedy," reported Chebrikov, "the current threat is due to the President's refusal to engage any modification to his politics." That refusal, said the memo, was exacerbated by Reagan's political success, which made the president surer of his course, and more obstinate -- and, worst of all, re-electable.

On that, the fourth and fifth paragraphs of Chebrikov's memo got to the thrust of Kennedy's offer: The senator was apparently clinging to hope that President Reagan's 1984 reelection bid could be thwarted. Of course, this seemed unlikely, given Reagan's undeniable popularity. So, where was the president vulnerable?

Alas, Kennedy had an answer, and suggestion, for his Soviet friends: In Chebrikov's words, "The only real threats to Reagan are problems of war and peace and Soviet-American relations. These issues, according to the senator, will without a doubt become the most important of the election campaign."

Therein, Chebrikov got to the heart of the U.S. senator's offer to the USSR's general secretary: "Kennedy believes that, given the state of current affairs, and in the interest of peace, it would be prudent and timely to undertake the following steps to counter the militaristic politics of Reagan."

Of these, step one would be for Andropov to invite the senator to Moscow for a personal meeting. Said Chebrikov: "The main purpose of the meeting, according to the senator, would be to arm Soviet officials with explanations regarding problems of nuclear disarmament so they would be better prepared and more convincing during appearances in the USA."

The second step, the KGB head informed Andropov, was a Kennedy strategy to help the Soviets "influence Americans." Chebrikov explained: "Kennedy believes that in order to influence Americans it would be important to organize in August-September of this year [1983], televised interviews with Y. V. Andropov in the USA." The media savvy Massachusetts senator recommended to the Soviet dictator that he seek a "direct appeal" to the American people. And, on that, "Kennedy and his friends," explained Chebrikov, were willing to help, listing Walter Cronkite and Barbara Walters (both listed by name in the memo) as good candidates for sit-down interviews with the dictator.

Kennedy concluded that the Soviets needed, in effect, some PR help, given that Reagan was good at "propaganda" (the word used in the memo). The senator wanted them to know he was more than eager to lend a hand.
Kennedy wanted the Soviets to saturate the American media during such a visit. Chebrikov said Kennedy could arrange interviews not only for the dictator but for "lower level Soviet officials, particularly from the military," who "would also have an opportunity to appeal directly to the American people about the peaceful intentions of the USSR."

This was apparently deemed crucial because of the dangerous threat posed not by Andropov's regime but -- in Kennedy's view -- by Ronald Reagan and his administration. It was up to the Kremlin folks to "root out the threat of nuclear war," "improve Soviet-American relations," and "define the safety for the world."

Quite contrary to the ludicrous assertions now being made about Ted Kennedy working jovially with Ronald Reagan, Kennedy, in truth, thought Reagan was a trigger-happy buffoon, and said so constantly, with vicious words of caricature and ridicule. The senator felt very differently about Yuri Andropov. As Chebrikov noted in his memo, "Kennedy is very impressed with the activities of Y. V. Andropov and other Soviet leaders."

Alas, the memo concluded with a discussion of Kennedy's own presidential prospects in 1984, and a note that Kennedy "underscored that he eagerly awaits a reply to his appeal."

What happened next? We will never know. None of the Kennedy admirers and court composers who serve as "journalists" bothered to ask, even with decades available to pose questions, beginning back in January 1992 when the highly reputable London Times broke the story.

In 2006, when my book was released, there was a virtual media blackout on coverage of the document, with the exception of conservative media: talk-radio, Rush Limbaugh, some websites, and mention on FoxNews by Brit Hume. Amazingly, I didn't even get calls from mainstream reporters seeking to shoot down the story. I had prepared in great detail to be grilled on national television, picturing the likes of Katie Couric needling me. I didn't need to worry.

I worked up a detailed op-ed on the document, where I even played devil's advocate by defending Kennedy, trying to get at his thinking, being as fair as possible. No major newspapers would touch it. The Boston Globe editors refused to acknowledge it or reply to my emails. The editor at the New York Times confessed to being "fascinated" by the piece but conceded that he wouldn't "be able to get it in."

One editor at a West Coast newspaper, a genuinely fair liberal, considered it carefully. We went back and forth. I was shocked to see that neither the editor nor his staff would do any investigating, not placing a single phone call to Kennedy's office. In the end, the editor rejected the piece, telling me: "I just can't believe Kennedy would do something that stupid."

Alas, here we are now, after Kennedy's death, and I'm reliving the same experience, as no one from the mainstream media has contacted me. Liberal reporters lionized Ted Kennedy in life and have begun the canonization process in death. They are liberal activists first, and journalists second.

Finally, a postscript for these liberal Democrat "journalists:" We know they don't care that Ted Kennedy did this to Ronald Reagan. Fine. Well, how about this? As the Mitrokhin Archives reveal, Senator Kennedy did something similar to President Jimmy Carter in 1980 -- his own political flesh and blood.

Does that story interest liberal reporters? No. I likewise noted that gem in 2006. I didn't get a single media inquiry.

It will be left to future generations to examine these truths. As for Senator Ted Kennedy's motivations for doing what he did with the Soviet leadership? Alas, now we can definitively say, he will never tell us. The liberal media protected him, all the way to the grave.

- Paul Kengor is author of The Crusader: Ronald Reagan and the Fall of Communism (HarperPerennial, 2007) and professor of political science at Grove City College. His latest book is The Judge: William P. Clark, Ronald Reagan's Top Hand (Ignatius Press, 2007).
Posted by jtf at 9:12 PM