BALTIMORE - If this were the Oscars, where a long career of unrewarded greatness has been known to help put a deserving nominee over the top, Mariano Rivera would be a shoo-in this season to win his first Cy Young Award. 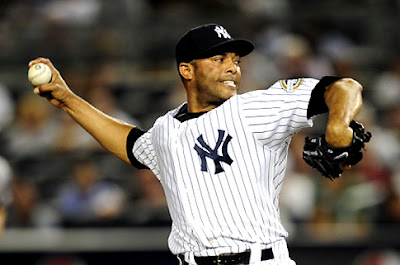 Mariano Rivera's numbers this season put him in the discussion for the Cy Young award, even as a closer.

In baseball, however, career achievement almost never factors into the voting on such awards. Furthermore, relievers have won only 11 out of 97 times the Cy Young has been awarded, so despite still another season of brilliance, Rivera is probably closer to a longshot.

The man they call Mo is deserving, to be sure. And even though a hot September from starters such as Zack Grienke, Justin Verlander, CC Sabathia, Felix Hernandez or Josh Beckett could make any of them the front-runner for the award, none is having the kind of lights-out season that would all but eliminate talk of a reliever winning.

That leaves the door open for Rivera, assuming the groin tightness the Yankees disclosed Wednesday night only keeps him out a few days as Rivera says he expects. Because to this point he is not only leading the American League with 38 saves, but also pitching to a 1.78 ERA and has coverted 34 straight saves opportunities, the longest streak of his career, while blowing only one save all season.

Most impressive, Rivera had allowed only one run in 29 appearances since June 12, as he adds still another chapter, at the age of 39, to his remarkable career.

As such there are plenty of people in baseball who think it would be quite fitting for him to be recognized as the Cy Young winner as punctuation to all that he has done as a Yankee.

As Andy Pettitte says, "I know I'm biased as his teammate, but I feel like he should win one because he's the best, that's all there is to it. He's dominated this game the way Michael Jordan dominated basketball."

"In Toronto I had (switch-hitter) Felipe Lopez ask me if he could hit righthanded against Rivera because that cutter was so tough on lefties," Martinez recalled yesterday. "Mariano's a guy who changes the game that way.

"I think he's worthy of the Cy Young, especially this year, but he has the burden of being so consistent that we expect it every year, as if it's not exceptional because it's just what he does."

The problem, of course, is that in some ways the Cy Young argument is an apples-and-oranges debate between starters and relievers. Baseball Writers Association of America voters - two from each AL city vote on the award - often have a hard time considering relievers who throw 70-80 innings a year on equal footing with starters throwing 220 or so.

Tony Massarotti of the Boston Globe has a Cy Young vote this season, and he said yesterday that he is "absolutely" considering Rivera, but admitted it usually takes extraordinary circumstances for him to vote for any reliever over a deserving starter.

"It's hard with a closer unless they have some sort of historic season," Massarotti said. "Everything has to line up exactly right for a reliever to win it."

That seems increasingly unlikely since the position of closer evolved into primarily a one-inning job over the last 20 or so years. Since Dennis Eckersley won the AL Cy Young Award in 1992 with the A's, the Dodgers' Eric Gagne in 2003 is the only other reliever to get the vote.

Eckersley was so dominant in '92, with 51 saves to go with a 7-1 record and a 1.91 ERA, he earned MVP honors as well. And Gagne, who was later tied to steroids via the Mitchell Report, tied the NL save record with 55 in 2003, never blowing one as he converted a major-league record 84 consecutive save opportunities over a three-year period.

There were a couple of winners in the late '80s who benefited from down years for starters - Phillies reliever Steve Bedrosian in '87 and Padres reliever Mark Davis in '89 - and before that relieving was whole different game.

And so it went for pitchers such as Bruce Sutter, Rollie Fingers, and Mike Marshall, the first reliever to earn a Cy Young. Marshall appeared in 106 games and threw 208 innings for the Dodgers in 1974 while going 15-12 and earning 21 saves.

Rivera, by contrast, has thrown only 552/3 innings this season, and the specialist nature of the job these days obviously makes it more difficult for a closer to win the award.

It doesn't mean he shouldn't win. In fact, a case can be made that he should have won in 2005. That season, Rivera had 43 saves and a career-low 1.38 ERA, yet finished a distant second in the voting to Bartolo Colon, who went 21-8 for the Angels but had a relatively high 3.48 ERA and gave up 26 home runs, benefiting greatly from good run support.

Rivera has finished third three other times, and even though he continues to defy age-related odds, you have to think this will be his last real shot at the award. Much depends on what happens over the next few weeks, especially in the case of Greinke, who has by the far the best overall numbers, including a league-leading 2.32 ERA, but only 13 wins for the last-place Royals.

If Greinke gets to 16 wins, the lowest total a Cy Young-winning starter has ever had, he'll be a heavy favorite. Meanwhile, Rivera, who hasn't blown a save since giving up that memorable home run to Jason Bay at Fenway Park on April 24, needs to get plenty of save opportunities and likely convert them all the rest of the way to make voters notice.

Rivera admits he feels like it's been something of a special season, especially since he had to come back from shoulder surgery and wasn't at full strength early.

"I knew that I was fine, but my shoulder needed time to get stronger," Rivera said yesterday. "It was a big challenge."

Still, Rivera, ever the team guy, insists he doesn't give the Cy Young Award a thought.

Actually, Rivera stands to be remembered as the greatest reliever ever, as much for his postseason dominance as his save total, which stands at 520 and counting.

And even though Rivera shows no signs of being ready to retire, the chance is there for something of a Hollywood ending in this wide-open AL Cy Young race.

"I know we don't do things based on career achievements," Buck Martinez said, "but certainly that's the one thing missing in a career that's had everything else. Mariano is a special guy. It'd be nice to see him get it."

Recent history says it's unlikely. But if none of the top starters has a hot month, Rivera's opportunity could become a compelling story. It may not be the Oscars, but in a close call, voters might be swayed at least a bit by sentiment.

Indeed, if Rivera's consecutive-saves streak gets to 40-plus over these final weeks, you wonder how any voter would say he doesn't deserve the Cy Young.

I recently came accross your blog and have been reading along. I thought I would leave my first comment. I dont know what to say except that I have enjoyed reading. Nice blog. I will keep visiting this blog very often.