Why I Wrote 'Hostile Intent'

My new novel, Hostile Intent, is out from Pinnacle Books today. Here’s the pitch: 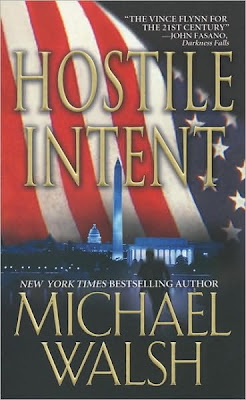 When terrorists seize a middle school in the Midwest and issue a list of impossible demands, the U.S. Government must activate its most secret, and lethal, resource, a man known only by his code name: “Devlin.” The top agent of a practically unknown branch of the intelligence world called the Central Security Service — the military-liaison arm of the National Security Agency — Devlin’s very existence is known only to a handful of senior Washington officials.

Operating entirely off the grid, Devlin is the “bleeding edge” of force projection, using both the technological power of the NSA and the blunt force of special ops as he and his ad hoc team of Blackwater fighters retake the school and rescue the children. The school-hostage crisis, however, is only a feint to get Devlin out of the shadows and into the kill zone. But by whom? As a series of ever-deadlier attacks strike the country, Devlin must fight his way out of the wilderness of mirrors before a monstrous plot can bring America to her knees and usher in a New World Order.

Hostile Intent is meant to kick off what we hope will become a series of books about Devlin (named after Cary Grant’s character in Notorious), an Ishmael for our time, his hand against every man’s and every man’s hand against his - especially the bad guys’. Naturally, I hope someone in Hollywood will buy it: as Dr. Johnson famously said: “No man but a blockhead ever wrote, except for money.”

But there’s a larger issue here, too: our continuing need for heroes, whether we like them or not. After watching a parade of un-heroic flops - Lions for Lambs, Redacted, Rendition, In the Valley of Elah, Grace is Gone, et al. - Hollywood has backed smartly away from anything that smacks of contemporary events, preferring instead to indulge its fetishes for cartoons, kids’ toys and vampires. Movies about “terrorists” now make us especially nervous, unless the terrorists are those pesky neo-Nazis still kicking around central Europe and plotting their revanchism over cognac and cigars. And God forbid we should ever indulge in “jingoism.”

Well, the heck with that. When I created “Devlin” - a man you could walk right by and never notice, so protected is he by his cloak of anonymity - I was looking to honor the kind of men and women who fight our nation’s battles in the bazaars and back alleys of the world’s least glamorous places, with no public acknowledgement of their bravery or their accomplishments, people who often lead (as Devlin does) lives of surpassing, nearly unbearable loneliness. Not for them are family and friends, spouses and children; they take their pleasures and solaces where they can find them, and head right back into battle.

Those of you who read Exchange Alley (about a rogue KGB agent who finds death in New York and the troubled cop who must solve his murder), And All the Saints (the “memoirs” of the great gangster, Owney Madden) or even the controversial As Time Goes By, my prequel/sequel to Casablanca, which took Rick Blaine back to Prohibition New York and forward to the assassination of Reinhard Heydrich in Prague, know that my lead characters are all flawed men in dire need of redemption. I can’t help it; it’s the Irish Catholic in me.

With “Devlin,” however, I’m shooting for something different. Orphaned at an early age, raised in secret by a man he despises, Devlin is a killing machine, a master of disguise, and (as “Archibald Grant”) a world-class lecturer on terrorism for the RAND Corp. He’s also a movie buff, drawing his array of operational aliases from his favorite actors’ roles. (In Hostile Intent, he cycles through James Cagney characters, starting with “Tom Powers.”) But, most important, he’s a man who’s dedicated his life to playing for keeps while out on the margins: the cyber-ghost as lethal weapon. Secure in his own abilities, and necessarily protective of his identity, he can tell the President of the United States to go fly a kite, gut an opponent in hand-to-hand combat, break into a French maximum-security prison and even make love to a mysterious, beautiful woman he hardly knows, but has to trust. If you can’t root for that guy, who can you root for?

That’s what we’re going to find out. By reflexively poking our finger into the eyes of everyone between New Jersey and Nevada - Flyover Country - we’ve alienated a good half of our potential audience. Yes, it’s true that the lion’s share of the box office is now found overseas, where we Yanks are often viewed as more vile than virtuous. But the domestic lambs still have a lot of fiscal clout, and a millions of them are waiting to cheer Vince Flynn’s Mitch Rapp, Robert Ferrigno’s Rakkim Epps, or Brad Thor’s Scot Harvath should they ever make it to the screen. We’d all be better off if we relearned Sam Goldwyn’s famous dictum: “If you want to send a message, call Western Union.”

So please say hello to Devlin. Each book of the series is meant to dramatize a prime security concern that keeps Ft. Meade, Langley and the DoD up late at night: a Beslan-style school attack, an EMP explosion and, believe it or not, even worse things, all coming to a neighborhood near you if America’s “rough men” do not remain vigilant. I have no idea how long he’ll be with us, although he’s scheduled for a re-appearance next year in Black Widow; eventually, I, the villains, or my readers will kill him off. But the things he stands for - honor, country, dedication, expertise and will power - should never die. Because they’re what heroes are made of.
Posted by jtf at 8:25 PM

I'm working my way through this now. Not unreadable like Brad Thor, but not close to Vince Flynn or within a hemisphere of being as good as Daniel Silva. The author's good intentions notwithstanding, the characters are unrealistic and his prose is pedestrian. So far, I'd give it a C+.

I was afraid of that...thought the article might prove to be better reading than the book.

I'd be interested in knowing what you think about the book. Walsh seems to have missed the first principle of writing this kind of fiction: create characters that people are interested in. The protagonist Devlin has his background set up, but otherwise is a cipher (at least in the 3rd of the book I've read). Whether it's Flynn, or Silva, or Andrew Britton, or Alex Berenson, they all have protagonists that are three dimensional. Heck, even W.E.B. Griffin manages that with Charlie Castillo, and he's a pretty tone deaf stylist. Good intentions don't make up for mediocre execution.