Necks Overflowing With Rivers of Metaphor

It seems like too much futile work in the heat of August — work bound to lead only to phony conclusions — to decipher how the sanguivorous have become the meat and drink of popular culture at the end of the first decade of the 21st century.

Though here we are in the summer of 2009 with the rage for “Twilight” continuing, the vampire movie “Thirst” claiming this year’s jury prize at Cannes, the supernatural series “Being Human” on BBC America, and others arriving on CW and AMC. 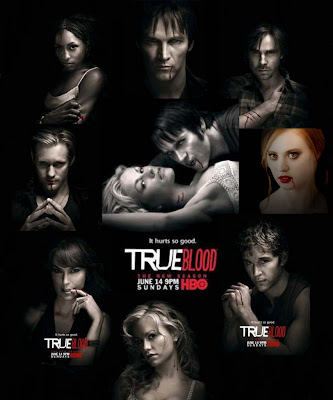 HBO’s “True Blood” has been credited with revivifying the channel’s fortunes. The Sookie Stackhouse novels by Charlaine Harris, which inspired the series, currently occupy seven of the top 20 spots on The New York Times’s paperback mass-market fiction best-seller list. The show, a mishmash of Flannery O’Connor aspirations and Anne Rice pop blood hunger, threatens to surpass “Sex and the City” as the most-watched series in HBO’s history after “The Sopranos.”

But “True Blood” is nothing like its mob-world forebear or anything else on HBO. Where “The Sopranos” had restraint and vast ambition, “True Blood” has excess and gall. During the current season, its second (the penultimate episode will be shown on Sunday), it has become an allegory for nearly every strain of tension in American life, despite a premise that suggested a more contained agenda. When “True Blood” appeared, it was easy to assume it was a metaphor for late-stage capitalism gone haywire, not simply because it began with an insolent store clerk reading Naomi Klein’s “Shock Doctrine” but also because the show seemed predicated on an interest in the retail addict’s belief that we’re made of what we buy.

Set in the fictional Louisiana town of Bon Temps, the series imagines vampires living among us, assimilating uneasily but subsisting on a new form of nourishment: synthetic blood sold in bars and convenience stores, negating the need (if not the desire) to make value meals out of human bodies. The hot vampire in town is Bill Compton, played by Stephen Moyer, with the same potato-flesh complexion as the character of Edward Cullen in the filmed adaptation of “Twilight.” Despite the progress they’ve made, vampires, like women bent on avoiding Botox, still can’t subject themselves to the murderous effects of sunlight.

Bill’s lack of availability for lunchtime patio dining makes him no less appealing to Sookie Stackhouse (Anna Paquin), an orphaned mind-reading waitress, who when the series began was a virgin looking at a very limited number of days of continued sexual ignorance. Bill has a courtly reserve to him, one he has kept up at least since the Civil War. It is the women of Bon Temps whose metabolisms run rapid with appetite. They like to bed down with vampires and accessories.

“True Blood” doesn’t care where those accessories come from. It isn’t interested in what we buy; it cares whether we really are who we sleep with. The sex is served in such luridly voluptuous, viewer-satiation-guaranteed portions that the show feels like nothing else on television, by which I mean television that isn’t available exclusively on $15.99 hotel-room pay-per-view. “True Blood” is also like little we’ve seen on the larger screen in years, a vestige of the ’80s forged from the musings of Adrian Lyne and the camera of David Lynch at a time when studios, unburdened by the need to sell DVDs at Wal-Mart, submitted to greater sexual permissiveness on film.

The reactionary gender politics that often attended such permissiveness are embedded in “True Blood,” even as the show’s creator, Alan Ball, works aggressively to prove what a fired-up liberal he is. As if we’ve consistently skipped those parts of the newspaper that have recounted the scandals of Jim Bakker or Ted Haggard, Mr. Ball insists on telling us that right-wing religious extremism is frequently linked with an untenable moral and sexual hypocrisy.

A Congressional candidate who makes vampire bashing (read: gay bashing) part of his platform is buying V, vampire blood with a Viagra effect on civilians, from a drag queen on the black market. Mr. Ball, as he did in “American Beauty,” which he wrote, and “Six Feet Under,” which he created and where eros and thanatos did battle every week, shoots his metaphors as if activating an armed squadron. Standing in for a hundred Jerry Falwells and the Curse of American Sexual Paranoia, one detractor on the show declaimed, “Vampires have taken our jobs and our women, and their very blood turns our children into addicts, drug dealers and homosexuals!”

The current season has set up a showdown between a psycho Christian cult called the Fellowship of the Sun, which runs a kind of conversion camp called the Light of Day Institute, and the vampires (and vampire sympathizers) the cult aims to destroy. At the same time it is libidinous women to whom bad things keep happening — and who make bad things happen.

No one in the fellowship is quite as terrifying as Maryann (Michelle Forbes), a not-entirely-human Dionysian nut job, who cooks up pot pies made of dubiously acquired organs and poses the greatest threat to the moral foundation of Bon Temps with her penchant for hypnotizing the town into states of violent, orgiastic rapture. When she is around, eyeballs start bleeding black. She wants everyone to be getting it on all the time. She also likes human sacrifice. Unchecked sexual freedom apparently isn’t what we’re supposed to be signing up for, either.

“True Blood” charges along under the spell of its own unmodulated id. That Mr. Ball seems tenuously at the rudder of his ideological ship doesn’t bother the millions of viewers who cannot get enough. “Sex and the City” — that was merely nun’s play.
Posted by jtf at 6:57 AM