Pledging allegiance to our beloved Obama 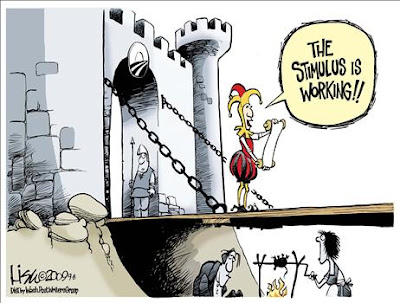 On Friday, I had the rare honor of appearing in the pages of The New York Times, apropos President Obama's plans to beam himself into every schoolhouse in the land in the peculiar belief that Generation iPod will find this an enthralling technical novelty. As Times reporters James C McKinley Jr. and Sam Dillon wrote:

"Mark Steyn, a Canadian author and political commentator, speaking on theRush Limbaugh show on Wednesday, accused Mr. Obama of trying to create a cult of personality, comparing him to Saddam Hussein and Kim Jong-il, the North Korean leader."

Oh, dear! "A Canadian author": Talk about damning with faint credentialization. I don't know what's crueler, the "Canadian" or the indefinite article. As to the rest of it, well, that's one way of putting it. Here's what I said on Wednesday re dear old Saddam and Kim:

"Obviously we're not talking about the cult of personality on the Saddam Hussein/Kim Jong-Il scale."

But, if the Times wants to play this game, bring it on. The Omnipresent Leader has traditionally been a characteristic feature of Third World basket-case dumps: the conflation of the man and the state is explicit, and ubiquitous. In 2003, motoring around western Iraq a few weeks after the regime's fall, when the schoolhouses were hastily taking down the huge portraits of Saddam that had hung on every classroom wall, I visited an elementary-school principal with a huge stack of suddenly empty picture frames piled up on his desk, and nothing to put in them. The education system's standard first-grade reader featured a couple of kids called Hassan and Amal – a kind of Iraqi Dick and Jane – proudly holding up their portraits of the great man and explaining the benefits of an Iraqi education:

"O come, Hassan," says Amal. "Let us chant for the homeland and use our pens to write, 'Our beloved Saddam.'"

"I come, Amal," says Hassan. "I come in a hurry to chant, 'O, Saddam, our courageous president, we are all soldiers defending the borders for you, carrying weapons and marching to success.'"

On Friday, Aug. 28, the principal of Eagle Bay Elementary School in Farmington, Utah – in the name of "education" – showed her young charges the "Obama Pledge" video released at the time of the inauguration, in which Ashton Kutcher and various other big-time celebrities, two or three of whom you might even recognize, "pledge to be a servant to our president and to all mankind because together we can, together we are, and together we will be the change that we seek."

Altogether now! Let us chant for mankind and use our pens to write, "O beloved Obama, our courageous president, we are all servants defending the hope for you and marching to change."

And, unlike Saddam's Iraq, we don't have the mitigating condition of being a one-man psycho state invented by the British Colonial Office after lunch on a wet afternoon in 1922.

Any self-respecting schoolkid, enjoined by his principal to be a "servant" to the head of state, would reply, "Get lost, creep." And, if they still taught history in American schools, he'd add, "Oh, and by the way, that question was settled in 1776."

To accompany President Obama's classroom speech this week, the White House and America's "educators" drafted some accompanying study materials. Children would be invited to write letters to themselves saying what they could do to "help the president."

My suggestion: "Not tell people what I really think about his lousy health care plan."

Well, after the unwelcome media attention, that exercise was hastily dropped.

For the rest of us, the president does not yet require a written test from grown-ups after his speeches, but it's surely only a matter of time. The New York Times managed to miss my point: Far from "accusing" the president of "trying to create a cult of personality," I spent much of my airtime on Rush's show last week "accusing" the president of doing an amazing job of finishing off his own cult of personality in record time. Obama's given 111 speeches, interviews and press conferences in which he's talked about health care, and the more he opens his mouth the more the American people recoil from his "reforms." Now he's giving a 112th – to a joint session of Congress – and this one, we're assured, will finally do the trick. That brand new Chevy may be rusting and up on bricks by the time he seals the deal but America's Auto Salesman-in-Chief will get you to sign in the end.

The president has made the mistake of believing his own publicity – or, at any rate, his own mainstream media coverage, which is pretty much the same thing. They told him he was the greatest orator since Socrates, but, alas, even Socrates would have difficulty playing six sets a night every Open Mike Night at the Soaring Rhetoric Lounge out on Route 127. Even Ashton Kutcher's charms would wane by the 112th speech.

"Mr Obama," wrote Peggy Noonan in The Wall Street Journal, "has grown boring." Amazing, but true. He's a crashing bore, and he's become one in nothing flat. His approval ratings have slumped – not just among Republicans, not just among independents, not just among seniors, who are after all first in line for the death panels. But they've fallen among young people – the starry-eyed members of the Hopeychangey Generation who stared into the mesmerizing giant "O" of his logo and saw the new Otopia. According to the latest Zogby poll, Obama's hold on the young is a wash: 41 per cent approve, 41 per cent disapprove. Zogby defines "young" as under 30, so maybe the kindergartners corralled into his audience this week will still be on side, but I wouldn't bet on it.

The President's strategy on Jan. 20 was to hurl all the vast transformative spaghetti at the wall – stimulus, auto nationalization, cap'n'trade, health care – and make it stick through the sheer charisma of his personality. Unfortunately, the American people aren't finding it quite so charismatic, and they're beginning to spot the yawning gulf between the post-partisan hopeychangey rhetoric and the budget-busting, prosperity-throttling, future-beggaring big government policies.

No wonder the poor chap's running out of material. At the time of writing, one of his exercises for America's schoolchildren is to suggest what you'd like him to do in his next speech. Here's mine: Call in sick, sir. You'll be doing your presidency a favor.

The president is not our ruler but our representative, a citizen-executive drawn from the people. It is unbecoming to a self-governing republic to require schoolchildren to (to cite another test question) select the three most important words in the president's speech.

Oh, wait. You have to rank the three most important words in order: