Mark Steyn: Gaza has its version of rocket scientists

Westerners seem to expect more civilized behavior from Israel than from its adversaries. 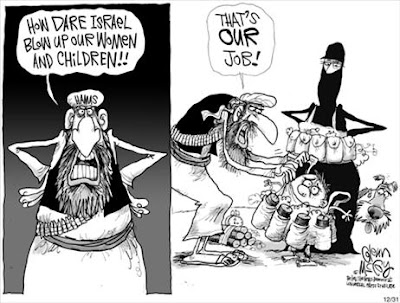 So how was your holiday season? Over in Gaza, whether or not they're putting the Christ back in Christmas, they're certainly putting the crucifixion back in Easter. According to the London-based Arabic newspaper al Hayat, on Dec. 23 Hamas legislators voted to introduce Sharia – Islamic law – to the Palestinian territories, including crucifixion. So next time you're visiting what my childhood books still quaintly called "the Holy Land" the re-enactments might be especially lifelike.

The following day, Christmas Eve, Samuel Huntington died at his home at Martha's Vineyard. A decade and a half ago, in his most famous book "The Clash Of Civilizations," professor Huntington argued that Western elites' view of man as homo economicuswas reductive and misleading – that cultural identity is a more profound behavioral indicator than lazy assumptions about the universal appeal of Western-style economic liberty and the benefits it brings.

Very few of us want to believe this thesis.

"The great majority of Palestinian people," Condi Rice, the secretary of state, said to commentator Cal Thomas a couple of years back, "they just want a better life. This is an educated population. I mean, they have a kind of culture of education and a culture of civil society. I just don't believe mothers want their children to grow up to be suicide bombers. I think the mothers want their children to grow up to go to university. And if you can create the right conditions, that's what people are going to do."

Thomas asked a sharp follow-up: "Do you think this or do you know this?"

"Well, I think I know it," said Secretary Rice.

"You think you know it?"

I think she knows she doesn't know it. But in the modern world there is no diplomatic vocabulary for the kind of cultural fault line represented by the Israeli/Palestinian dispute, so even a smart thinker like Dr. Rice can only frame it as an issue of economic and educational opportunity. Of course, there are plenty of Palestinians like the ones the secretary of state described: You meet them living as doctors and lawyers in Los Angeles and Montreal and Geneva … but not, on the whole, in Gaza.

In Gaza, they don't vote for Hamas because they want access to university education. Or, if they do, it's to get Junior into the Saudi-funded, Hamas-run Islamic University of Gaza, where majoring in rocket science involves making one and firing it at the Zionist Entity. In 2007, as part of their attempt to recover Gaza from Hamas, Fatah seized 1,000 Qassam rockets at the university, as well as seven Iranian military trainers.

At a certain unspoken level, we understand that the Huntington thesis is right, and the Rice view is wishful thinking. After all, when French President Sarkozy and other European critics bemoan Israel's "disproportionate" response, what really are they saying? That they expect better from the despised Jews than from Hamas. That they regard Israel as a Western society bound by civilized norms, whereas any old barbarism issuing forth from Gaza is to be excused on grounds of "desperation."

Hence, this slightly surreal headline from The New York Times: "Israel Rejects Cease-Fire, But Offers Gaza Aid." For whatever that's worth. Wafa Samir Ibrahim al-Biss, a young Palestinian woman who received considerate and exemplary treatment at an Israeli hospital in Beersheba, returned to that same hospital packed with explosives in order to blow herself up and kill the doctors and nurses who restored her to health. Well, what do you expect? It's "desperation" born of "poverty" and "occupation."

If it was, it would be easy to fix. But what if it's not? What if it's about something more primal than land borders and economic aid?

A couple of days after Hamas voted to restore crucifixion to the Holy Land, their patron in Tehran (and their primary source of "aid") put in an appearance on British TV. As multicultural "balance" to Her Majesty The Queen's traditional Christmas message, the TV network Channel 4 invited President Ahmadinejad to give an alternative Yuletide address on the grounds that it was a valuable public service to let viewers hear him "speak for himself, which people in the West don't often get the chance to see."

In fact, as Caroline Glick pointed out in The Jerusalem Post, the great man "speaks for himself" all the time – when he's at the United Nations, calling on all countries to submit to Islam; when he's presiding over his international conference of Holocaust deniers; when he's calling for Israel to be "wiped off the map" – or (in his more "moderate" moments) relocated to a couple of provinces of Germany and Austria. Caroline Glick forbore to mention that, according to President Ahmadinejad's chief adviser, Hassan Abbassi, his geopolitical strategy is based on the premise that "Britain is the mother of all evils" – the evils being America, Australia, Israel, the Gulf states, Canada and New Zealand, all the malign progeny of the British Empire. "We have established a department that will take care of England," Mr. Abbassi said in 2005. "England's demise is on our agenda."

So when Britain's Channel 4 says that we don't get the chance to see these fellows speak for themselves, it would be more accurate to say that they speak for themselves incessantly but the louder they speak the more we put our hands over our ears and go "Nya nya, can't hear you." We do this in part because, if you're as invested as most Western elites are in the idea that all anyone wants is to go to university, get a steady job and settle down in a nice house in the suburbs, a statement such as "England's demise is on our agenda" becomes almost literally untranslatable. When President Ahmadinejad threatens to wipe Israel off the face of the map, we deplore him as a genocidal fantasist. But maybe he's a genocidal realist, and we're the fantasists.

The civilizational clashes of professor Huntington's book are not inevitable. Culture is not immutable. But changing culture is tough and thankless and something the West no longer has the stomach for. Unfortunately, the Saudis do, and so do the Iranians. And not just in Gaza but elsewhere the trend is away from "moderation" and toward something fiercer and ever more implacable.

To be fair to President Ahmadinejad's hosts at Channel 4, the "department that will take care of England" probably doesn't get the lion's share of the funding in Tehran. On the other hand, when Hashemi Rafsanjani describes the Zionist Entity as "the most hideous occurrence in history," which the Muslim world "will vomit out from its midst" with "a single atomic bomb," that sounds rather more specific, if not teetering alarmingly on the "disproportionate." Unlike its international critics in North America and Europe, Israel has no margin for error.
Posted by jtf at 11:44 PM