Castro's One 'Hell' of an Achievement

Fifty Years ago Fidel and Raul Castro hijacked an entire island, and ever since that New Year’s day, they have never relaxed their grip on it. What can one say about such an anniversary, if one is Cuban? This fateful date hovers over all of us like a mushroom cloud, smothering our past, present, and future. 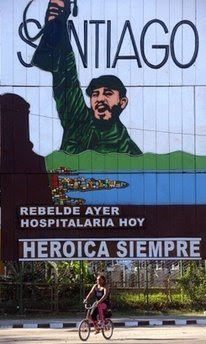 A woman rides past a propaganda poster in downtown Santiago de Cuba on the eve of the 50th anniversary of the Cuban Revolution.
(AFP/Rodrigo Arangua)


Fidel Castro always boasted that he and his so-called Revolution were loved by “the Cuban people,” and many have believed him. Don’t let that fool you. “The Cuban people” he spoke about were a grotesque abstraction, a figment of his imagination that he successfully projected onto the world stage. He loved to speak for all Cubans, and to think of himself as our embodiment. Yet he betrayed each and every Cuban, simply because he demonized all of us who disagreed with him, and enslaved a whole nation in the name of eternal class warfare, creating new elites who dedicated themselves to suppressing their neighbor’s rights. If you objected to his self-anointing as Maximum Leader or questioned his quixotic schemes, two painful choices were open to you. Just two. And nothing has changed under Raul.

One option was to oppose the so-called Revolution. But if you dared, even by murmuring in the dark, you faced certain imprisonment, torture, or death at the hands of the new elites. Hundreds of thousands of Cubans were brave enough to choose that path, but the world at large never paid much attention to them, or simply denied their existence. The other option was to beg for perpetual banishment. Nearly two million Cubans chose that route, but millions more never got the chance. No one knows for sure how many thousands have drowned at sea while trying to escape.

Exile is never easy, but it is even harder when you are turned into a villain. Fidel loved to portray all of us exiles as arrogant troglodytes who refused to share in the dreams of “the Cuban people” as he imagined them. We were vilified, stripped of our land, our families, and all our belongings, down to wedding rings and family photos. We were picked clean, and the new elites got to keep everything. And many around the world still think of us as selfish louts.

Those who remained behind lost a lot too, besides their basic human rights. As they waved their Cuban flags at mandatory rallies and waited in line with their ration books for scraps, and as they listened to countless promises about a very distant glorious future, they saw other Cubans oozing out of the island in a steady stream, like blood from a gaping wound. And they also had to watch everything crumble around them, helplessly, while new hotels sprang up and hordes of privileged tourists from the capitalist world flowed in like toxic sludge, to exploit them, the ragged noble savages, and to gawk at their ruins and reclaim Cuba as their tawdry playground.

We exiles are always asked: aren’t the free medical care and education provided by the Revolution a great achievement? “No,” we say, speaking from first-hand experience, as the only people on earth fully qualified to comment on this subject. Those programs are a sham, and their cost insufferably high. Fidel and Raul have always claimed that “the Cuban people” were incapable of achieving social justice by any means other than those dictated by them. Their legacy, like that of all despots, rests on violence: repression is the heart and soul of their Orwellian notion of social justice, which demands that free expression be stifled at every turn, and that everyone live in abject poverty, save the elites.

In the long run, it matters little that all sorts of false claims are made for Cuba’s woefully inadequate health care and education programs. Within the island itself, the state constantly reminds Cubans that they owe everything to “the Revolution” and must therefore obey it unconditionally, like slaves on a plantation. In sum, the Revolution owns you, body and soul: no subservience, no benefits.

The ultimate legacy of the Revolution may very well be its utter contempt for Cubans. For half a century now, Cuba’s leaders have strangled all political discourse, poisoning whatever common future all of us Cubans could have hoped for. The Castro regime has not only expelled twenty percent of the population and ripped apart millions of families, but also fanned hatred and intolerance. In the process, the Revolution turned us all into beggars of one sort or another, either in our own homeland or in exile, and bequeathed to us a destitute island prison, part brothel, part work camp, part freak show, where the only way to escape despair –short of suicide-- is to flee, or to become an agent of repression.

That is one hell of an achievement. Hell itself, one might say.

Carlos Eire is the T. Lawrason Riggs Professor of History and Religious Studies at Yale University and author of "Waiting for Snow in Havana," winner of 2003 National Book Award, nonfiction.
Posted by jtf at 11:59 PM