Groundhog day for the fifth column of malice


So there is indeed now a war. In Gaza. Actually, there are two wars going on: one involving rockets and warplanes, and the other involving the media, as Barry Rubin notes:

Nothing is clearer than Hamas’s strategy. It gives Israel the choice between rockets and media, and Hamas thinks it is a situation of, ‘We win or you lose.’...The smug smiles are wiped off the faces of Hamas leaders. Yet they have one more weapon, their reserves, they call up the media. Those arrogant, heroic, macho victors of yesterday--literally yesterday as the process takes only a few hours--are transformed into pitiful victims. Casualty figures are announced by Hamas, and accepted by reporters who are not on the spot. Everyone hit is, of course, a civilian. No soldiers here. And the casualties are disproportionate: Hamas has arranged it that way. If necessary, sympathetic photographers take pictures of children who pretend to be injured, and once they are published in Western newspapers these claims become fact. 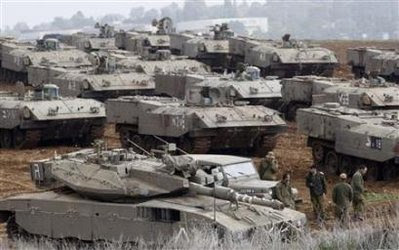 
All too predictable – and going to plan, with assistance from the Club of Terror (aka the UN) Secretary General Ban Ki-moon who condemned ‘excessive use of force leading to the killing and injuring of civilians’, and Navi Pillay, the ludicrous UN High Commissioner for ‘Human Rights’, who ‘strongly condemned Israel’s disproportionate use of force.’ Of course, the Club of Terror (aka the UN) has been silent about the actual violations of international law by the Palestinians, as pointed out here by Justus Reid Weiner and Avi Bell:

The Palestinian attacks violate one of the most basic rules of international humanitarian law: the rule of distinction, which requires combatants to aim all their attacks at legitimate targets - enemy combatants or objects that contribute to enemy military actions. Violations of the rule of distinction - attacks deliberately aimed at civilians or protected objects as such - are war crimes.

Furthermore, say Weiner and Bell, Israel actually has a legal duty to take action against Hamas under the Genocide Convention:

In carrying out their attacks on Israeli Jews as part of a larger aim to kill Jews, as demonstrated by the Hamas Covenant, many of the Palestinian terrorists are also violating the Convention on the Prevention and Punishment of Genocide. Under Article 1 of the Genocide Convention, Israel and other signatories are required to ‘prevent and punish’ not only persons who carry out such genocidal acts, but those who conspire with them, incite them to kill and are complicit with their actions. The Convention thus requires Israel to prevent and punish the terrorists themselves, as well as leading figures that have publicly supported the Palestinian attacks. Article 2 of the Convention defines any killing with intent ‘to destroy, in whole or in part, a national, ethnical, racial or religious group, as such’ as an act of genocide.

But for exercising its legal duty in accordance with international law, Israel is condemned and told to stop by politicians such as French President Nicolas Sarkozy and Britain’s Foreign Secretary David Miliband. The moral inversion is staggering. Miliband has called for an immediate ceasefire by Israel. The implication is that Israel should suffer the Palestinian rockets attacks indefinitely.

If anything has been ‘disproportionate’, it’s been Israel’s refusal to take such action during the years when its southern citizens have been terrorised by rockets and other missiles raining down on them from Gaza. No other country in the world would have sat on its hands for so long in such circumstances. But whenever Israel defends itself militarily, its response is said to be ‘disproportionate’. The malice, ignorance and sheer idiocy of this claim is refuted here comprehensively by Dore Gold, who points out that Israel’s actions in Gaza are wholly in accordance with international law. This permits Israel to launch such an operation to prevent itself from being further attacked. Moreover, it defines ‘disproportionate’ force as when

force becomes excessive if it is employed for another purpose, like causing unnecessary harm to civilians.

But Israel has demonstrably not been targeting civilians but Hamas terrorists. Despite the wicked impression given by the media, most of the casualties in this operation have been Hamas operatives. Even Hamas itself has admitted that the vast majority of sites Israel has hit were part of their military infrastructure. UNRWA officials in the Gaza Strip have put the number of deaths at 310, of whom 51 were civilians. The rest were Hamas terrorists.

Certainly, some civilian casualties are regrettably inevitable in any such situation – but particularly so in Gaza, since Hamas has deliberately sited its terrorist infrastructure amongst the civilian population.

Those who scream ‘disproportionate’ think – grotesquely -- that not enough Israelis have been killed. But that’s in part because Israel cares enough about human life to construct air raid shelters where its beleaguered civilians take cover; Hamas deliberately stores its rockets and other apparatus of mass murder below apartment blocks and in centres of population in order to get as many of its own people killed as possible as a propaganda weapon. Hamas is thus guilty of war crimes not just against Israelis but against the Palestinian people. Yet on this there is – fantastically, surreally – almost total silence in the west, which blames Israel instead. Historical resonances, anyone?

In any event, if by ‘disproportionate’ is meant merely an imbalance in the numbers who are killed on either side, this is actually inescapable if the infrastructure of aggression is to be defeated. Many more died in Afghanistan than in the 9/11 attacks; yet that war was necessary to destroy the Taleban. Many more died in Nazi Germany or Japan than in Britain or America during World War Two. Yet the scale of the Allied offensive was necessary to defeat Nazism and prevent yet more carnage amongst its designated victims. 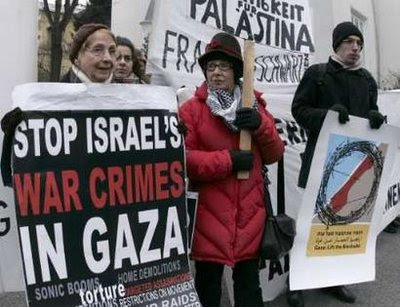 Protesters demonstrate in front of the Israeli embassy in Vienna December 30, 2008, against Israeli air strikes in the Gaza Strip.
REUTERS/Heinz-Peter Bader (AUSTRIA)


The disgusting fifth column in the Gaza conflict, however, is – as ever – the western media. It was telling to witness the sight of British TV camera crews heading out to Israel on Saturday night. The point was that they weren’t already there – because their editors had not thought it necessary to send them to cover the resumed rocket attacks on southern Israel. Indeed, hardly anyone in Britain is aware that Israel is only now finally responding to some 6000 rocket attacks since 2001, with a fifty per cent increase after Israel withdrew from Gaza in 2005. British journalists were only dispatched to the battle zone when Israel finally retaliated – because, appallingly, it is only Jewish violence that is ever the story.

As a result, Israel is painted – wholly unjustly and untruthfully -- as the aggressor. The ineffable BBC reported in radio bulletins on Saturday that Israel’s attack had ‘put back the chance of peace in the region’. Most sane people would think that the reason peace in the region had been put back was that Hamas was continuing to wage aggressive war. And indeed, even now it is still firing rockets at Israel, including Katyushas and Iranian Grads which are reaching as far as Ashkelon and Ashdod. Today they killed another Israeli in Ashkelon and injured many more -- including several Israeli Arabs.

If the media have mentioned the attacks on Israel at all, they have done so as an afterthought. The main story is ‘disproportionate’ Israeli violence. As far as I can see, there has been no mention of the extraordinary fact that on the day prior to the start of the Israeli operation, a Palestinian from the Gaza Strip was admitted to hospital in Israel for medical treatment for a severe wound -- inflicted upon him by a stray Hamas rocket which had been fired at Israel.

What other country would treat its enemies in its own hospitals – which Israel does routinely with Palestinians from Gaza -- even when they are wounded as a direct consequence of their own side trying to murder yet more Israelis? What other country would provide or enable the supply of electricity, gas and other essentials to people who use such facilities to continue trying to murder as many of its cititzens as possible? On Sunday, for instance, as Ha’aretz reported, the Kerem Shalom crossing was opened to let through 26 trucks carrying food and medical equipment. Today it was opened again and about 40 trucks had entered with food and medical supplies by midday. Yet organizations such as Amnesty International have condemned Israel's imposition of all ‘blockades’ on the Gaza Strip as ‘collective punishment’, and Jeremy Hobbs, Director of Oxfam International, has called on Israel ‘immediately [to] lift its inhumane and illegal siege’.

Yet it is Hamas that is refusing wounded Gazans access into Egypt for treatment -- and indeed the Egyptians even opened fire on them. So where are the screams about Egyptian and Hamas brutality? Where are Amnesty and Oxfam’s condemnation of Hamas and Egypt? And might all those from the Foreign Secretary down screaming about a ‘humanitarian disaster’ in Gaza pause for one second and look at the well-fed, healthy Gazans parading across their TV screens? If that’s a ‘humanitarian disaster’ – with supplies constantly pouring through the illegal tunnels from Egypt, along with billions of dollars-worth of missiles with which to commit mass murder -- what do they call what’s happening in Zimbabwe, which for some unaccountable reason inspires among the high-minded merely indifference?

Such bigotry and malice are not confined to British media and NGOs. On Salon, Glenn Greenwald whines about

America’s one-sided support for whatever Israel does from our political class, and one-sided condemnation of Israel's enemies (who are, ipso facto, American enemies) -- all of it, as usual, sharply divergent from the consensus in much of the rest of the world.

Oh really? Well, Hamas has been blamed for this war by Mahmoud Abbas, who said Hamas could have avoided this attack if it had prolonged its ‘cease-fire’. It has been blamed for this war by Egypt; and Arab states which are terrified of Islamism in general and Iran in particular are privately rooting for Israel to wipe Hamas out. Even the Israeli left is supporting this operation. The only people taking the side of the genocidal terrorists of Hamas are the western media, parroting their propaganda and thus inciting yet more to join the murderous rampage against Israel as well as ratcheting up the pressure on world leaders to force Israel to stop before Hamas is destroyed.

Isn’t there a case for legal action against these media outlets on account of their blood libels, for indirectly aiding the perpetrators of attempted genocide?
Posted by jtf at 8:33 AM