On the other side from civilisation

When Ed Husain famously renounced Islamism there were some who warned that, despite his denunciation of Hizb ut Tahrir and Islamist ideology, he remained dangerously confused and should not be treated as a serious reformer. I thought this was too harsh. He had, after all, bravely taken an enormous step out of the darkness; surely he had to be given time and encouragement to adjust properly to the light. Surely it was a good thing that he was encouraging young British Muslims to turn away from Islamic radicalism. The extreme importance of that task was such that, even when he wrote a stupid and ignorant piece about Zionism, I hoped that if he was now told the truth about the history of Israel and the Jewish people, he would realise the error of his thinking on that particular issue. So I gave him the benefit of the doubt.

With first this press release from the Quilliam Foundation soon after the start of the current Israeli operation in Gaza, and now his poisonous piece on the Guardian’s Comment is Free today, Ed Husain has shown that in the great battle to defend civilisation against barbarism he is on the wrong side. 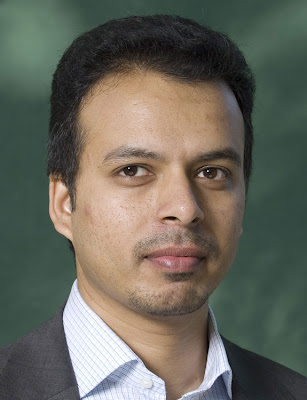 Disgustingly, he draws a moral equivalence between Palestinian human bomb attacks and Israel’s operation in Gaza, which he calls

But this is totally untrue. The vast majority of Gazans who have been killed were Hamas terrorists. According to today’s UN figures, 364 have been killed of whom only 62 were civilians. Israel has been targeting only the Hamas infrastructure and its terror-masters, as detailed here. While some civilian casualties are unfortunately inevitable, Israel is clearly attempting to minimise them. It is Hamas which deliberately targets Israeli civilians when it fires its rockets and detonates its human bombs specifically at Israeli civilian targets. It is Hamas which deliberately turns its own civilians into targets by siting its rockets and other military equipment under apartment blocks and in centres of densely crowded population. Hamas tries to kill as many Israeli innocents as possible; Israel’s military operation is conducted solely to defend its people against such attack and is designed to minimise the loss of civilian life in Gaza. To draw an equivalence between the two is obscene.

Ed Husain argues that this war will strengthen Hamas in Gaza and radicalise yet more Muslims. It is surely rather more likely that many Palestinians, who have themselves been terrorised by Hamas, will blame Hamas for the current situation, just as Fatah and Egypt have done. Moreover, since any measure Israel takes to defend itself against mass murder – and for that matter, any and every military action in defence of the west by Britain or America -- is used to radicalise Muslims, he is in effect saying that Israel should never take any military action to defend itself, even after being attacked by 5000 rockets in three years.

Indeed, since the very existence of Israel is used to radicalise Muslims, it also implies that Israel should cease to exist at all. Which is implicitly to endorse a second genocide of the Jews. But then Ed Husain comes perilously close to doing just that in this article. Having declared

-- big deal! – he vitiates even this by saying he is now having second thoughts:

But Israel's cold, politically timed killing of more than 300 Palestinians makes me, and millions more, rethink our attitude towards Israel.

‘Cold politically timed killings’? But Israel only launched this offensive because -- as Mahmoud Abbas has said -- Hamas ended its ‘truce’ and started lobbing dozens of rockets at Israel. And the fact that he can even apparently entertain the idea that Israel might no longer have ‘the right to exist’ puts him outside the moral pale altogether. Does he say China has no right to exist on account of Tibet? Syria on account of the thousands it killed in Hama in one weekend in 1982? Iran on account of its barbaric killings of women, gays and political dissidents? No, of course not – only Israel. He goes on:

Israel’s calculated killing and attempts at deception cannot be overlooked. How can the children of Holocaust survivors become such brutal killers? And during the Sabbath?

This takes the blood libel onto another plane still. The implication that the victims of brutal killing have themselves become brutal killers – when all they are doing is trying to prevent another Holocaust, explicitly threatened in the foundational charter of the people against whose genocidal onslaught Israel is merely defending itself – is unconscionable. And the dig at Jewish religious practice is as ignorant as it is gratuitous. Wars of self-defence, as this one is, to save innocent lives threatened by murderous aggression, take precedence in Judaism over sabbath observance. How telling that Ed Husain, ostensibly condemning Israel over the conduct of a war, cannot resist having a sly poke at Judaism itself. 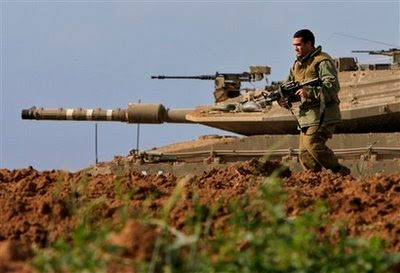 An Israeli soldier walks past a tank at a staging area on the Israel-Gaza border Wednesday, Dec. 31, 2008.
(AP Photo/Tsafrir Abayov)

Then there’s his lamentable historical illiteracy. He writes:

I’ve sat in homes of poor, hospitable Palestinians who still yearn to return to their homeland, taken by force from them in the turmoil after Britain hurriedly left Palestine in 1948...At schools across the Arab world children are taught about the Balfour Declaration of 1917 and the Sykes-Picot agreement of 1916. Here in Britain, we might want to forget this imperial past, but ask any Arab and they will reel off these dates and confirm Britain's involvement in creating Israel. As a country, we have a moral duty to right our historical wrongs. We helped create Israel. We must now help create a Palestine.

For goodness sake! To repeat for the nth time: Israel was never the Palestinians’ ‘homeland’. It was never taken from them ‘by force’. On the contrary, they tried to take the Jews’ homeland from them by force – and are still trying. It was the Jews alone for whom historically ‘Palestine’ was ever their national homeland. On account of that history and the inalienable right to the land that it conferred, Britain was given a mandate to re-establish that national home and establish accordingly ‘close settlement’ of the Jews within the whole of Palestine – which included what is now Israel, the West Bank and Gaza. To appease Arab violence, the Arabs who lived there were offered their own state around the areas where they were concentrated. But they refused and, backed by neighbouring Arab states, went to war to destroy at birth the Jewish state established by the UN under international law – a war that has continued uninterrupted to this day.

There is only one way to de-radicalise people who are being brainwashed by murderous lies, and that is to tell them the truth. If Ed Husain were really interested in de-radicalising Britain’s Muslims, he would tell them that they have been fed a diet of incendiary lies and blood libels about Israel and the Jews, and that justice demands they are taught instead the truth. But instead, he has now adopted the very narrative and rhetoric that are driving Muslims to mass murder.

The issue of Israel sits at the very apex of the fight to defend civilisation. Those who wish to destroy western civilisation need to destroy the Jews, whose moral precepts formed its foundation stones. The deranged hatred of the Jews lies at the core of the Islamists’ hatred of America, the ‘infidel’ west and modernity, and is the reason why they wish to destroy Israel. Unless people in the west understand that Israel’s fight is their own fight, they will be on the wrong side of the war to defend not just the west but civilisation in general.

The British government has invested huge hopes in Ed Husain as an attractive and plausible antidote to Islamist extremism in Britain. But how can anyone now believe anything he has ever said when he promulgates such a gross libel as the canard of Israel’s ‘massacre’ of hundreds of ‘innocent' Gazans? How can the government believe that Ed Husain will de-radicalise British Muslims when through articles such as this one he is inciting them to yet more hatred of Israel, the west’s forward salient against Islamist aggression?

Of course, his arguments are -- tragically, appallingly -- replicated in large measure amongst the British intelligentsia, media and indeed members of the government itself and the broad political class. Indeed, this is a far, far wider problem than one not-so-reformed-after-all Islamic extremist. It is a profound moral corruption that has infected the British body politic. The fact that so many among Britain’s educated class think like this means that they too are on the wrong side in the great battle to defend civilisation. And it’s not just Israel that in their moral confusion they are thus preparing to throw to the Islamist wolves. It is their own society too.