Fifty years ago on Jan 1, 1959, Fidel Castro's rebels marched into Havana overthrowing the Batista dictatorship and promising the people of Cuba a revolution based on democracy, prosperity and social justice. Instead, the Cuban people have been abused and repressed for half a century. The prosperity Castro promised was never realized as the economy stagnated under the weight of communism. Those who dared to criticize Castro's government were executed, imprisoned, or forced to flee their country. 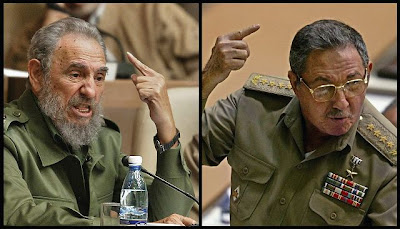 
The "revolutionary" promises never materialized. Instead, the Cuban people have experienced the most tyrannical regime in the modern history of the Western Hemisphere, with the same political elite in power for the past 50 years.

Today, the average Cuban lives on $20 a month and relies on government ration cards. There are shortages of basic foodstuffs and supplies such as cooking oil and soap. It is illegal for Cubans to open their own businesses to provide for their families.

If Cubans speak out against the government, corruption, or their lack of food, they face intimidation, violence, and imprisonment. If they decide to emigrate, they lose their jobs and are harassed. The Cuban government is currently holding at least 240 political prisoners whose only crime is that they spoke out against the injustice of the system.

One must understand that Castro is first and foremost anti-American. His regime has maintained power for 50 years by blaming the United States for the hardships of the Cuban people. Whenever the Cuban government has had surplus resources, ordinary Cubans have never benefited. Instead, resources were used to finance Cuban adventurism abroad by sending money, soldiers, and arms to support insurgencies in Africa and Latin America.

Like the nine administrations before it, the Bush administration has pressed Cuba to respect its citizens' fundamental human rights, release its political prisoners, and hold free and fair elections. Over the past 50 years, the Cuban government has made it close to impossible to improve relations between our two countries. This can be easily confirmed with a review of history over the past half century.

In 1959, after Castro traveled to the United States, he instructed his ministers to reject U.S. aid. In 1962, during the Cuban Missile Crisis, he urged the Soviet Union to launch a preemptive nuclear strike on the United States. In 1977, President Carter sought to improve relations by opening a U.S. interests section in Cuba. The Cuban government responded by including dangerous prisoners and patients from its jails and mental health facilities in the Mariel Boatlift. In the mid-1990s, President Clinton eased restrictions on travel and remittances. Havana responded by creating a migration crisis and shooting down two U.S. civilian planes over international waters.

This year, Cuba was ravaged by Hurricanes Gustav and Ike. The United States offered five humanitarian aid packages, without conditions, but the Cuban government refused, once again putting politics above the welfare of its people.

Those who hold power in Cuba are determined to maintain their positions of privilege even if it means the people of Cuba must continue to suffer. The communist regime of Cuba has made no secret that it is a staunch enemy of the United States. The regime's disdain for human rights is appalling, yet the United States is criticized for its policies towards Cuba.

The goal of U.S. policy must remain focused on helping the Cuban people transition to a free society, while denying Castro resources. That has always been the endgame. But, there are those today who would accept less. To suggest unconditional dialogue with the Castro brothers would only signal that the conditions in Cuba are acceptable. If the United States does not continue to stand for the ideals of freedom and human rights and against the many guises of tyranny and oppression, who will?

Carlos M. Gutierrez is U.S. Secretary of Commerce.
Posted by jtf at 8:25 AM